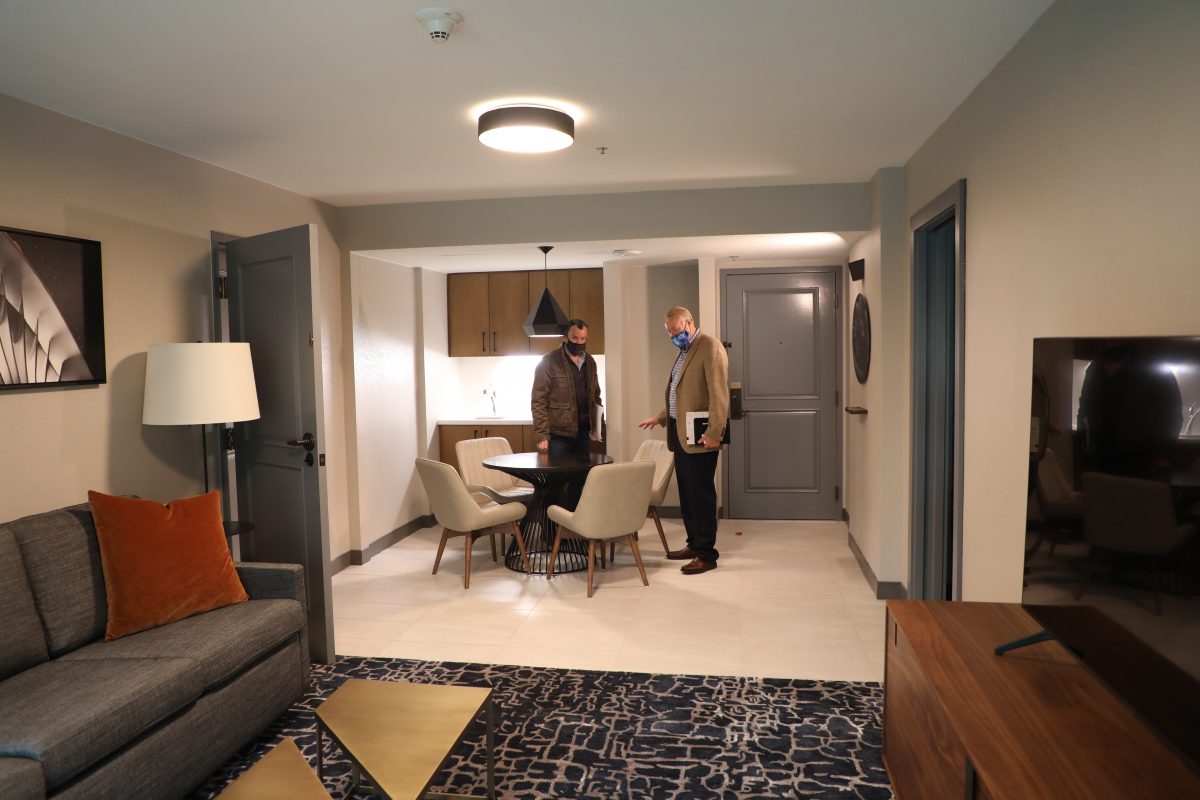 A project to revamp and rebrand the Sheraton Hotel Midwest City is coming along.

The city-owned property is undergoing an $8 million renovation project designed to modernize the hotel and attract new visitors. 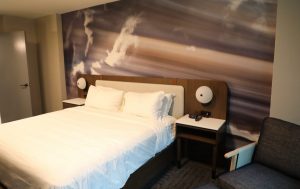 The remodeled guest rooms at the Midwest City hotel will feature an aerospace theme with a custom wall mural. (Photo by Jeff Harrison)

The hotel is being upgraded and converted to a Delta Hotel by Marriott – a four-star hotel chain located primarily in Canada. The project includes upgrading guest rooms, lobby, restaurant and bar, fitness room and other common areas.

New designs will incorporate natural tones and subtle nods to the aerospace industry and Midwest City history.  The Delta Hotel brand features modern decor and design that is flexible and accommodating for business travelers.

“The rooms have a retro look and all customized furniture and plenty of places to plug in electronics,” said Tim Lyon, city manager.

Among the most noticeable changes will be the bathrooms which will feature glass showers with rainfall spray heads. The existing guest bathrooms have a tub and shower.

Workers completed construction of the new fitness center, pool and model guest rooms late last year. As part of the agreement with Marriott, city leaders needed to complete the two model rooms and receive approval from the hotel officials before working on the rest of the guest rooms. The two model rooms included different furniture and designs.

Due to travel restrictions during the pandemic, Marriott officials reviewed the model rooms virtually. A hotel employee wore virtual reality goggles and toured the rooms, providing the hotel officials a look at the newly designed rooms.

“They had about 10-12 people on the other end watching as we did the virtual walkthrough,” said Craig Davis, project manager for Midwest City. “It went off without a hitch, and we agre 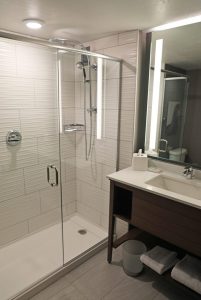 ed on a lot of things with the designs.”

After receiving approval from Marriott on the designs, the city has put the project out for bid. City officials hope to have a construction contract awarded this spring and have the project completed by November.

The room renovations will be completed in two phases. Crews will work on two floors at a time.

Faryn Atchison, director of sales for the hotel, is enthusiastic about the renovation project.

“It’s really exciting to have a facelift here and create a niche hotel,” she said. “We’ve already had some tours of the new guest rooms and they loved the design.”

The restaurant and bar areas will feature more communal dining areas with a variety of seating and flexible design. It will be renamed the Skytrain in honor of the aircraft and former movie theater. Longtime resident and local historian Cindy Mikeman donated the original Skytrain outdoor sign lettering to be displayed at the restaurant.

The restaurant, bar and common areas are expected to be completed by mid-May. Atchison said they are planning a ribbon cutting celebration after work is completed.

The Reed Conference Center was also expanded as part of the project. The city added about 2,000 square feet by enclosing a covered patio area.

Flick Mars Design Architects, of Dallas, Texas, was hired to redesign and decorate the guest rooms, lobby, restaurant and common areas. CMS Willowbrook is overseeing construction at the hotel as well as the convention center expansion.