The Midwest City Council last week approved a deal to allow SSM Health Care of Oklahoma to sublease and operate the city’s hospital.
The agreement was approved more than 1 ½ years after initial discussion began. In December, SSM Health Oklahoma reached an agreement with Community Health Systems, Inc. to assume operations of the hospital known as AllianceHealth Midwest.

At the March 9 meeting, the council first voted to terminate the lease with Community Health Systems which has operated the hospital since 2014. They then approved the new sublease with SSM Health Care of Oklahoma.

“This has been a long 18 months on this project. Nobody knows how close this came at times and how difficult of a time it was for (City Manager) Tim (Lyon) and his staff,” said councilman Sean Reed. “Our staff did a wonderful job and I want to say thank you to everybody involved. This is the biggest thing that we will ever vote on.”

SSM Health Care of Oklahoma will take over the lease on April 1. 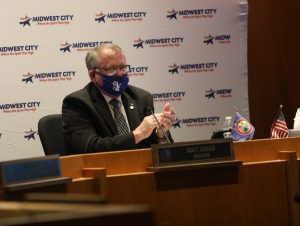 Under the agreement, SSM will pay $1 million annual rent and invest $30 million in the hospital over the first three years of the term. The initial investment will be used to purchase major medical equipment, make infrastructure improvements, and develop new service lines and other such projects.

Midwest City will contribute $20 million towards infrastructure improvements at the hospital. The investment will be made over the first three years of the lease agreement. The improvements include such things as LED retrofit/conversion, parking lot upgrades, HVAC systems, elevator repairs and roof replacement.

Midwest City will help redevelop property around the hospital or Medical District. The city will create a Revitalization Plan within one year of the new lease. The city will also acquire obsolete, non-compliant, or underdeveloped properties near the hospital which are available for fair market value prices to facilitate redevelopment of the Medical District.
The lease agreement is for 15 years with the option for three five-year extensions.

Midwest City Memorial Hospital opened in 1962 as a 70-bed facility to serve the community. The city-owned hospital underwent several expansions over the next few decades. It was renamed Midwest City Regional Hospital in 1988.

In 1996, the city council agreed to lease the hospital to Health Management Associates, Inc. for $60 million. The city uses the interest from that agreement to award grants to local organizations.

In 2014, Community Health Systems bought Health Management Associates and assumed operations of the hospital. It was later renamed AllianceHealth Midwest.