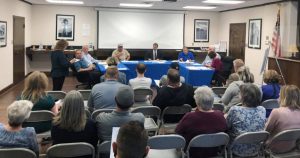 Residents fill City Hall as three new city leaders are sworn in for their first meeting. (PHOTO BY RYAN HORTON)

However, clashes with the new mayor and existing city staff were underway before any changes were even official.

Robert Thompson, longtime attorney for the City of Harrah, had submitted his letter of resignation April 16.

“It is with no small measure of sadness that I hearby submit my resignation as city attorney of Harrah, as requested by the new mayor elect, to be effective April 30, 2021,” wrote Thompson in his resignation letter.

However, Thompson agreed to withdrawal his resignation following a contentious April 19 City Council meeting that featured several combative exchanges between the newly sworn in mayor and city manager.

“After much contemplation, I have reconsidered my resignation and I hearby withdrawal my letter,” wrote Thompson, April 20. “I will continue to serve as City Attorney at the pleasure of the City Council for so long as the City Council deems it beneficial.”

City manager Clayton Lucas says Thompson has every right to withdrawal his resignation letter until the City Council takes action.

“He was requested to not attend the April 19 meeting by a newly elected mayor,” said Lucas. “He didn’t want to be somewhere he wasn’t wanted, but he has now agreed to stay with the city as long as the City Council wants him to do so.”

Thompson has served as the city attorney for 40 years.

“Mr. Thompson is an exceptional municipal attorney and extremely respected throughout the metro area, as well as the state. I know that I speak for many when I say that we sincerely appreciate his decades of dedicated service,” said Lucas. 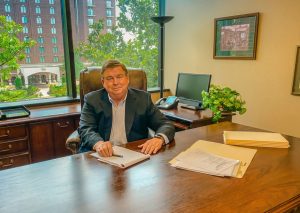 Robert Thompson has served as city attorney for the City of Harrah for 40 years, (PHOTO PROVIDED)

The city attorney is approved by a vote of the City Council, and therefore his removal would require a majority vote of the five-member council.

Lucas says to interview and approve a new city attorney could take anywhere from four weeks to four months, and any period the city does not have legal counsel could open Harrah up to litigation at the cost of taxpayers.

Trent was sworn into office at the beginning of the April 19 regular City Council meeting.

There appeared to be no love lost between the new mayor and city staff appointed by the previous council.

The mayor and city manager repeatedly locked horns in debate during the open public meeting.

In his first meeting at the helm of the council, Trent questioned agenda items and existing contracts that were initiated by the previous City Council.

“I’m looking at the best interest of the City of Harrah and the people living here,” said Trent. “We’re going to stand up for what’s right.”

He was outspoken in his disapproval of economic development incentives and contracts executed by the previous city leaders.

The City of Harrah is governed by a council-manager municipal structure.

In Harrah, the five-member City Council is elected at large. All authority to set policy rests with the nonpartisan City Council. By charter, the mayor is tasked with leading meetings of the council, but has an equally weighted vote as those other four members.

The city manager is hired by the council to manage staff and handle day-to-day operations of the city.

Trent has called for a special executive session meeting of the Harrah City Council for Monday April 26 with just one agenda item, discussion and possible action for the termination of the city manager and city attorney. 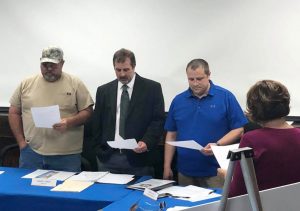