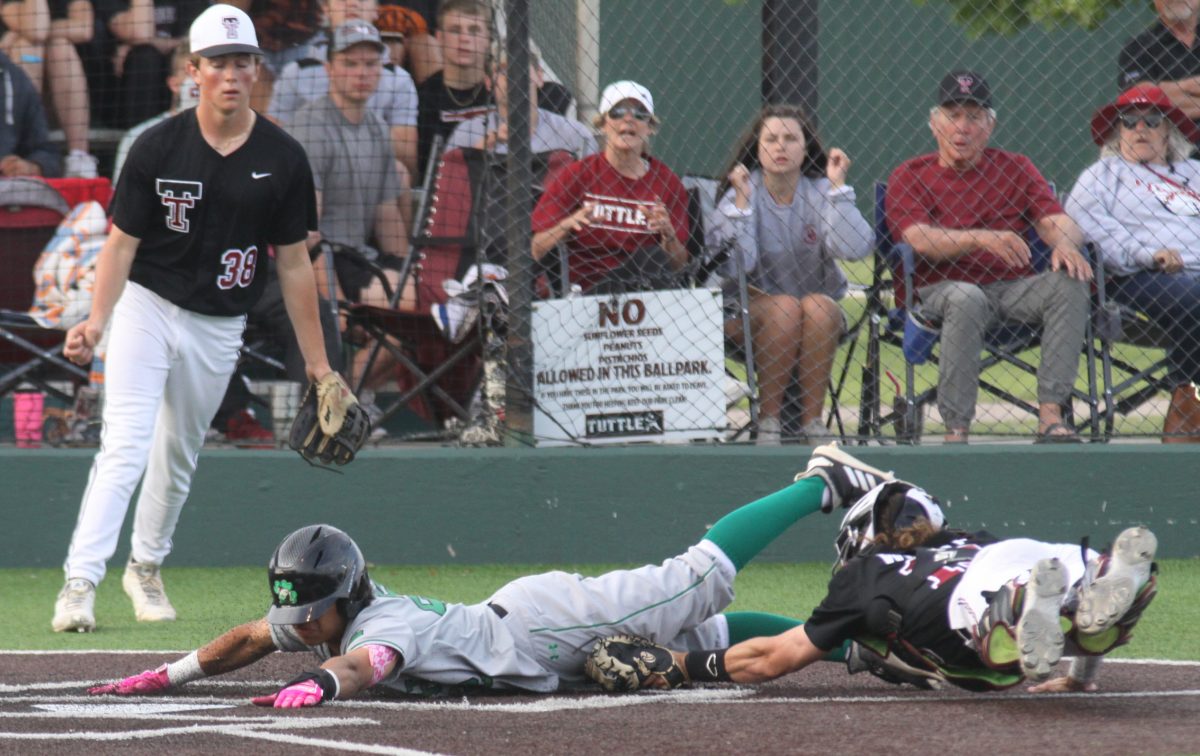 After winning state championships in softball, cheer, wrestling, and girls basketball this year, Tuttle has one of the last eight baseball teams remaining in 4A.

The 4A Baseball State Championships will be played at Shawnee High School Thursday through Saturday.

The 35-3 Tigers will play Verdigris Thursday at 4 p.m. in the quarterfinals of the state tournament.

With a win, Tuttle would face the winner of Fort Gibson and Kingfisher Friday at 2 p.m.

The finals will be held Saturday at 5 p.m. when Tuttle would face either Heritage Hall, Poteau, Marlow, or Berryhill.

These are all, of course, dependent upon the weather.

Verdigris is 25-9, and they’ve only lost to powerhouse programs all season. The Tigers beat them 3-2 just over a month ago.

“Verdigris is a very quality program who’s tradition-rich,” Tuttle Head Baseball Coach Breck Draper said Monday morning. “Coach Brian Keith does a really good job making sure his guys play the right way every day. They’re a very consistent team. They’re going to do things right. They’re going to execute their gameplans. They’re going to play good defense. It’s a bunch of good athletes. They play the right way and they buy into his system and they’ll be a pretty good team. They’ve got a rich tradition of success in the state tournament. Most of that has been in Class 3A, and they’ve moved up to 4A the last several years, and we actually lost to them when I was at Heritage Hall in 2018. They beat us in the first round of the state tournament when I was at Heritage Hall, 3-2. They compete well. It’s going to be hard to beat them.”

Coach Draper talked about the difficulties the Tigers had during the last week’s regional round, and said that this year’s Tigers stay focused and find a way to get the job done.

“We talked about, as a coaching staff, that we had nothing go the way we drew it up,” Draper said of regionals. “We struggled really badly on the mound, to throw the ball over the plate. In the three losses we have this year, the reason is we don’t throw the ball over the plate and give our defense the chance to make plays. We swung the bat offensively really well. We executed offensively really well, played defense well. We just gave away way too many free passes, but to come out winning all three of our games against some good arms, shows a lot about our team. They didn’t let anything really affect them. They didn’t get flustered or panicked. They just kind of kept playing the game and we made enough plays to find a way on top. We walked sixteen guys in one game, and threw a no-hitter. It’s very uncommon and unheard-of.”

Alex Conover makes a tag against a Bishop McGuinness runner trying to make it from first to second base Friday in Tuttle during the Regional Tournament.