Designed to encourage writing and critical thinking skills, the inaugural contest was themed “What does patriotism mean in America today?”

Finley Grice, of Choctaw Elementary, was selected as the winner. 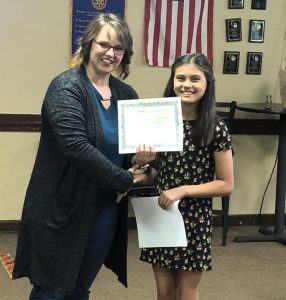 “Patriotism is loving, and being enthusiastic and loyal to your country,” wrote Grice. “Overall, patriotism is a great and delightful thing around the world.”

Judges applauded the effort demonstrated in all entries, but noted Grice successfully tied her essay into the local community while expressing critical thinking skills deserving of top honors.

“Patriotism to me means love, devotion and respect for your country and what your country is or can become,” Grice wrote.

“My dad serves as a police officer for Oklahoma City. I have lived in Oklahoma my whole life, I’ve never lived in another country before. My family loves Oklahoma, we spend a majority of our time here in Oklahoma. My dad has served as an officer for as long as I can remember.”

Comtec Security Services funded the essay contest providing prizes for both Grice and her school.

Choctaw Elementary received a $200 donation, while Grice secured an award certificate and an item from the Wounded Warrior Project store.

Grice along with her mother, Caroline, and teacher, Lindsey Hartman, were treated to lunch at the May 27 EOC Rotary Club noon meeting.

This was the pilot year for the essay contest, but club members hope to expand the program in coming years.

“We just opened it up to Choctaw-Nicoma Park fifth grade students this year, because we were limited on time and trying something new,” said EOC Rotary Satellite Club Essay Contest committee member Angi Lay. “We hope to expand the program to the other school districts we serve in the future.”

In addition to Choctaw-Nicoma Park, EOC Rotary serves the areas of Harrah, Jones and Luther.

The club supports many local and international efforts and has been dedicated to improving literacy in eastern Oklahoma County for decades. Some related annual club efforts include providing Pre-K reading books to local students, awarding scholarships to local seniors, honoring local winners of the District Teacher of the Year Award and providing dictionaries to every third grader in Choctaw-Nicoma Park, Harrah, Jones and Luther schools.

EOC Rotarians gather every Thursday at the Country Club at Choctaw Creek, 2200 N Hiwassee Rd., with both noon and 7 p.m. meetings. 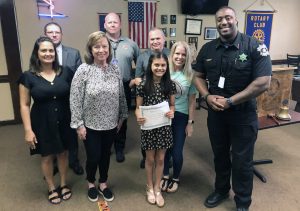