Mid-Del Schools got a jump on contract negotiations with teachers and support staff.

The school board last week approved several changes to compensation for the 2021-22 school year.

School officials wanted to get a jump on the negotiations in an effort to retain and attract employees.

“We wanted to take care of the compensation piece now so employees will know what to expect regarding salaries before the school year ends,” said Jason Perez, deputy superintendent. “This also helps with recruitment of new employees and retention of current ones.”

Perez said the district will continue to work with the labor unions on a second tentative agreement that will address contract language. The negations are typically approved in late summer.

One of the changes included increasing a stipend for special education teachers by 3%. The district currently offers a 7% stipend which will increase to 10% for the 2021-22 school year. It was approved through a memorandum of understanding with the teachers union.

The tentative agreement with the Mid-Del Association of Classroom Teachers includes:
• Step increase for certified personnel covered under negotiated agreement.
• Additional $1,700 annual pay increase for certificated personnel covered under the agreement, excluding personnel on the Tech Center Support Compensation schedules.
• Additional $250 annual pay increases for certified personnel on the Tech Center Support Compensation schedules.
• Add steps for speech pathologist and school psychologists/pyschometrists for full-time professional work experience.
• $1,000 signing bonus for any speech pathologist or physchologist/psychometrsist who enters into a full-time contracted position, or a one-time $1,000 retention bonus for anyone who renews their full-time contract the following year.
• $1,000 incentive to any certified teacher on current contract with Mid-Del Public Schools who successfully complete a special education-related certification test and accepts a full-time positions as special education teacher with the district.
• A supplemental stipend increment of $4,500 for co-ed swim head coach.
• A supplemental stipend increment of $600 for a sponsor of the Gay-Straight Alliance.

The school board also approved salary adjustments for employees not represented by the MDACT and MDSEA negotiated agreements. The adjustments align with those agreements approved with the labor unions.

Lori Burris, president of the Mid-Del Association of Classroom Teachers, said the teachers supported the early negotiations and approved it with 98% support. She said the group has been hesitant on the idea in the past due to uncertainty about state funding.

“This is something the district has wanted to do for years and we talked about it last year,” she said. “The holdup was we weren’t sure what the state funding will look like. And if more money did become available later, could we reopen it. This year with all of the money from the American Rescue Plan and the CARES ACT we felt like we could do it.”

Burris said they may look at doing it again in the future.

The tentative agreements will increase the starting salary for the lowest paid employee to $12.85 per hour.

“It’s not as high as we’d like it to be but we’re getting closer,” said Superintendent Rick Cobb. 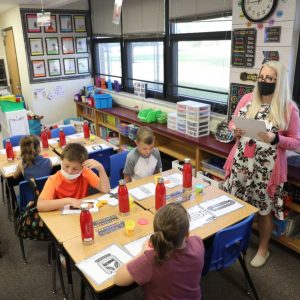