Jacobi Johnson takes his role as a big brother seriously.

He set a positive example for his three younger siblings as star athlete and model student at Midwest City High School and now as a college student and entrepreneur.

Last summer, Jacobi left home for the University of North Texas where he earned a football scholarship. When he learned his sister Ily Brown was facing a challenge, he didn’t hesitate to help.

In November, the 16-year-old Midwest City High School student was diagnosed with lupus, an autoimmune disease where the body attacks its healthy cells and tissues. 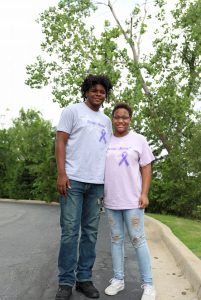 Jacobi Johnson and his sister Ily Brown created t-shirts to raise awareness about lupus. Ily, who will be a junior at Midwest City High School, was diagnosed with the autoimmune disease in November. Jacobi graduated from MCHS in 2020 and is a student and football player at the University of North Texas. (Photo by Jeff Harrison)

To help out, Jacobi created special t-shirts to raise awareness for the disease that affects about 5 million people worldwide. The shirts feature butterflies and a purple ribbon – which are used for lupus awareness.It also coincided with lupus awareness month in May.

“I was at school in Denton when I heard about it, so I couldn’t do too much to be around here or care for her, so I had to find something for me to put into it,” Jacobi said.

Jacobi recently started his own clothing line called Fear-Less Living and produced several screen-printed t-shirts. He used his experience to design and print them at Cam’s Silkscreening and Design, a local business in Midwest City.

“It was important to do something together with my sister that was big for everyone to see,” Jacobi said.

The brother and sister pulled off the t-shirt sale despite a tight schedule. Jacobi was home in Midwest City for only a few weeks during break from college. He had to return to Denton for football practices after Memorial Day.

Ily was diagnosed with lupus in November but her symptoms started much earlier. The complex and often debilitating autoimmune disease causes a wide range of symptoms that can come and go overtime and vary from person to person. These include extreme fatigue, pain or swelling in joints, low-grade fevers and damage to internal organs.

Lupus commonly affects women more than men, between the ages of 14 and 45. It is more common among people of color.

“My hands would swell up and I’d have a rash on my face and arms,” Ily said.

Her mother said the symptoms were difficult to diagnose.

“After each symptom we went to a dermatologist or another specialist and we never knew,” Miesha said. “It took one doctor to put them all together and say these are all symptoms of one thing.”

Ily’s symptoms were often made worse by exposure to sunlight.

“She plays softball and she’d come back with what looks like bug bites,” Miesha said.

Ily said she felt isolated early on. She attended school virtually this year due to health concerns. Many of the lupus support groups and even the lupus awareness walk were limited due to COVID-19 restrictions.

Creating the t-shirts has helped boost Ily’s confidence and connected her with others impacted by the disease.

“The shirts kind of shed light on it and a lot of people are learning about it,” Ily said.

Jacobi announced the t-shirt with a post on Twitter that included photos of Ily and him together. The post quickly gained traction with many people offering words of encouragement for Ily.

“Grown-ups can tell you all day that it’s going to be okay, but when you’re a 15-year-old girl and your hair is falling out that’s difficult to deal with,” said Miesha. “When you have a cool, big brother he kind of co-signs for her like that, it’s a big deal. It boosted her confidence. It made her feel better and made her feel okay with it.”

Ily plans to create a teen peer group and online journal raising awareness about lupus. Proceeds from the t-shirt sales will help boost the efforts.

Miesha seeing her children care for each other has been heartwarming.

“With your parents you kind of expect them to take care of you and do stuff for you, but when it’s your big brother or sister it’s different,” Miesha said. “Sometimes siblings don’t get along. And the youngest two follow them.”

The t-shirts can be purchased by contacting Jacobi Johnson on Twitter @cobitheathlete, by calling (405) 812-4506, or emailing jjfearless01@gmail.com.

They cost $25 each and are available in light purple (women’s) and gray (men’s) designs.