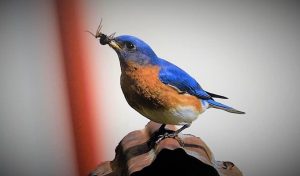 A local bluebird captures a spider on a successful hunt. Bluebirds must hunt regularly as their diet consists primarily of insects and wild berries.    (PHOTO BY MELANIE EMERSON)

Local bird watchers may have noticed less bluebirds this year.

Hundreds of thousands of eastern bluebirds died in February during harsh winter weather throughout southern states.

A long stretch of snow, ice and freezing temperatures killed bluebirds in a wide swath from Oklahoma to the east coast.

Experts say Oklahoma was one of the most impacted areas.

“This was a big problem for eastern bluebirds that I don’t think anyone saw coming,” said Mark Howery, wildlife diversity biologist with the Oklahoma Department of Wildlife Conservation. “I estimate the state lost 75 to 80 percent of our bluebird population.”

Bluebirds and other half-hardy birds froze or died from starvation.

“It appears the majority of them starved to death, because it was too cold for them to get food,” said Howery.
“Bluebirds rely primarily on insects in warm weather and fruit in winter months.”

All birds with similar dietary practices suffered population decreases this year, but none as bad as the eastern bluebirds.
Oklahoma is home to the Bewick’s Wren and the Carolina Wren. Howery estimates the wren population has been reduced by around 30 percent.

“Any bird that has to hunt for berries or insects will suffer during prolonged periods of subzero temperatures,” said Howery. “Mockingbirds, hermit thrushes and field sparrows were also affected. Birds that have a seed-based diet and rely on a wide range of food did much better through the cold weather. Some other birds are also capable of storing food and don’t have to hunt in order to eat.” 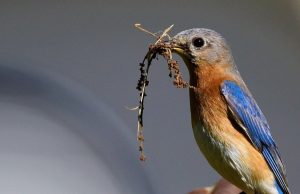 A survivor of the 2021 winter storm gathers some food this summer. Bluebirds are primarily insectivores, but also like to dine on wild berries with high oil content. (PHOTO BY MELANIE EMERSON)

Those birds with a diet more equipped for severe weather includes blue jays.

“For the average person, these birds look similar, but they’re very different. Blue jay numbers shouldn’t be down, but eastern bluebird numbers are down significantly,” said Howery. “Eventually they’ll recover, but it will likely take seven or eight years.”

Experts say Oklahoma hasn’t seen a bird population decrease like this in over 40 years.

“Oklahoma’s bluebird population has been increasing until this. We had a couple similar weather events back in the 1970s, but back then everyone thought we were about to enter another ice age. A lot has changed since then,” Howery said. “We had a similar winter event back in 1983, but that storm came in early winter. This time it was later in winter. Their food sources had already been eaten or were knocked to the ground during an October ice storm. Then the food was covered with ice and snow during February’s 11-day stretch of freezing temperatures.”

Bluebirds do migrate, but they typically only go as far south as needed to find mild winter weather.

Howery says most of Oklahoma’s bluebirds are residents, while bluebirds in state’s north of Oklahoma typically fly over the state to Texas for winter and then back north in warmer months.

“East of the Rocky Mountains there’s estimated to be around 20 million eastern bluebirds. I estimate Oklahoma had a population of somewhere up to 300,000 before the winter storm,” said Howery. “We lost well over half of those bluebirds.”

Howery says the most important thing residents can do to support bluebirds is to plant trees and shrubs that produce winter fruit.

“In the winter they primarily eat berries from things like holly, poison ivy and mistletoe. They prefer berries with a high oil content,” said Howery. “You can also put out bluebird boxes, but they don’t typically nest in urban areas. They hunt in urban areas, but house sparrows typically overrun them for nesting sites in urban environments.”

Bluebirds and other species often use nest boxes for roosting in cold weather.

For more information on the eastern bluebird and other bird species found in Oklahoma visit www.wildlifedepartment.com. 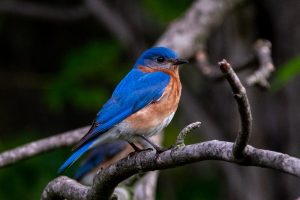 A local bluebird captures a spider on a successful hunt. Bluebirds must hunt regularly as their diet consists primarily of insects and wild berries.     (PHOTO BY MELANIE EMERSON) 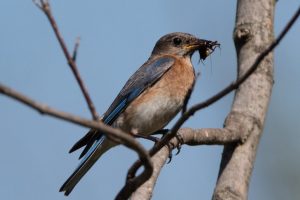 A local bluebird prepares to eat its prey following a successful hunt. (PHOTO BY MELANIE EMERSON) 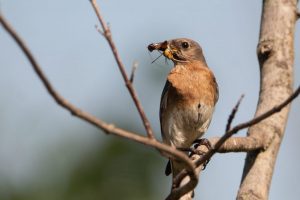 A female bluebird enjoys a snack. Typically, females are grayish above with bluish wings and tail, and an orange-brown breast. Males typically are brighter blue above with a rusty colored throat and chest. (PHOTO BY MELANIE EMERSON)