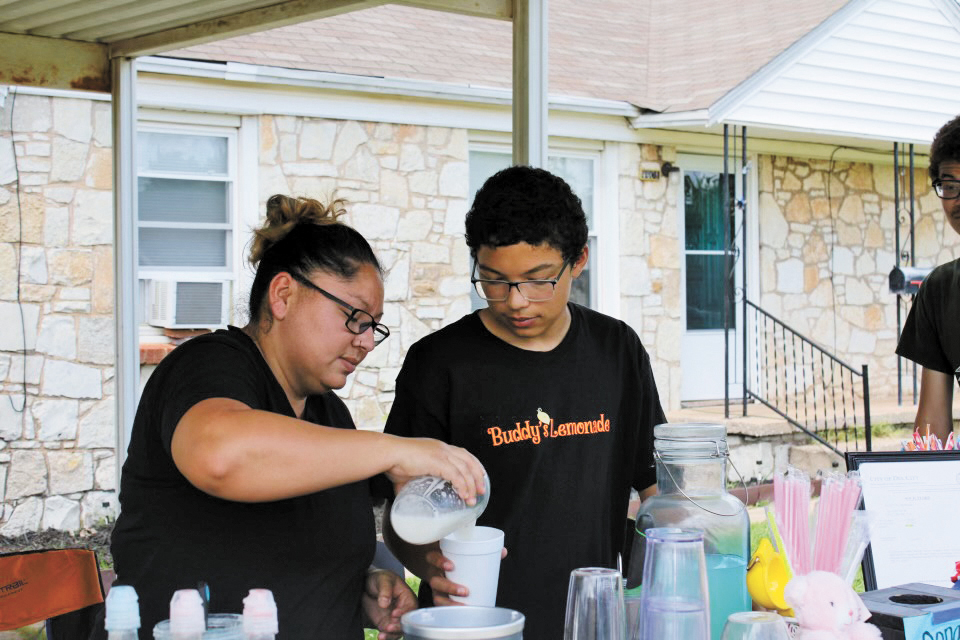 A quiet Del City neighborhood is home to a lemonade stand run by a teen and his family to raise money for a loved one.

Andres “Buddy” Guerra-Thorton, 13, and his family have opened “Buddy’s Lemonade” to raise money for their grandmother, Frances Guerra, who is battling two forms of stage four breast cancer.

On February 27, 2020, while celebrating Buddy’s 12th birthday the family received a despairing phone call from Frances. She informed them that she had been diagnosed with two kinds of stage four breast cancer. Buddy turned sadness into action, sharing his idea for “Buddy’s Lemonade” on his 13th birthday to raise money for his grandmother.

“Buddy didn’t want to make her feel bad. Mom obviously felt bad breaking the news on his birthday. So, this year on his birthday he produced the idea of doing Buddy’s Lemonade,” said Andee.

With left over wood in the backyard, the Guerra family quickly got to work building and decorating a lemonade stand and signs. By the end of April “Buddy’s Lemonade” was open for business. 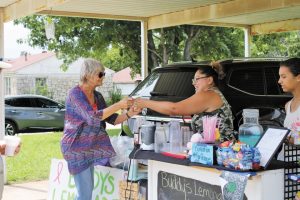 A Del City family serves lemonade and snacks to raise money for a loved one. Photo by Anthony Thomas

“The lemonade stand is for our grandma who has stage four breast cancer. There was stuff in the backyard to do it. So, we just got the stuff and made the stand,” said Buddy. “Seeing everyone come out is a lot. It makes you feel happy but on the other hand it’s stressful because your constantly up and down.”

Knowing there would be residents who complained about the stand, Buddy and Aaron walked to City Hall to find out what they needed to get a business permit. The city told the boys a permit was not necessary because it was a fundraiser for their grandmother.

Around the time the stand opened Andee joined the Del City neighborhood watch where she met Del City Mayor Floyd Eason. She explained the purpose of the stand and got the Mayor and city’s blessing. Eason also granted the Guerra’s permission to sell their lemonade at the Del City Armed Forces Parade.

“Admire the ingenuity and work ethic of this young man with providing the community with a valuable product and helping his family all at the same time,” said Eason.
Despite having the blessing of the Mayor and city one Del City resident still attempted to get the lemonade stand closed for business. In response, on July 10 the city came out to the family’s home and presented them with an official business permit for their stand.

“A lot of people have been complaining about lemonade stands recently. Wanting to shut them down and complain. So, I wanted to make sure that would not happen,” Buddy said.
Originally only serving lemonade, Buddy is now serves fresh lemonade with lime, blueberry, and strawberry, cherry limeade, limeade, popcorn, candy, chips, and cookies. An 8.5-ounce cup is $1, 16 ounce $3, 18 ounce $4, and 20 ounces for $5.

Right now, their grandfather is not working to allow him to care for Frances. All proceeds go to paying bills, food, medication, and medical bills for the couple. Thanks to the money raised,

Frances’s condition is improving and she has an upcoming appointment with the doctor that the family hopes will provide positive results.

“She’s doing really good. The doctor says the chemo is working. She goes once every three weeks and it looks like it’s doing its job,” Andee said.

Along with lemonade the family is also selling t-shirts for $10 that say “Buddy’s Lemonade” on the front and “#for Frances” on the back. The Guerra’s also had a lawn sale this past weekend to raise extra money.

The stand will be closed July 20-23 as the family heads to Temple for a surprise visit with their grandmother. The stand is at 4401 SE 22nd St, Del City.

For updates follow them on Facebook at “Buddy’s Lemonade.” For donations on Venmo or Cash App use “Letsbeatcancer.”