After Choctaw voters rejected two proposals on a February 2020 ballot that would have provided funding for needed road reconstruction throughout the city limits, city officials took action to begin gathering more information regarding the city’s streets in an effort to begin developing alternative plans.

Residents opted to continue ongoing practices of road repair efforts by shooting down both proposals designed to kickstart a new era of road management focused on reconstruction.

However, city officials and many residents still agree that current deteriorating road conditions are unacceptable.

Indian Meridian Road, as seen just south of SE 29th Street, is one of many stretches of road within the city that officials say needs completely reconstructed. (PHOTO BY RYAN HORTON)

City officials voted to begin gathering updated traffic counts in order to better inform the public, and possibly get more community trust and involvement in the development of a new road plan.

Updated traffic counts were taken this spring at several locations throughout the City of Choctaw.

“Obviously, NE 23rd Street is our state highway that runs through here and it has our highest traffic count. Our highest traffic count is 30,049. That corresponding data behind that was dates selected while school was still in session between April and May,” said Cary Simonds, Choctaw’s economic development director.

Henney Road also ranked among the city’s most traveled routes with a total traffic count for April 20-21 of 10,704 just north of NE 10th Street.

A study conducted before developing the proposals that were rejected in 2020 reported Choctaw needed about $400 million in road repairs citywide, while only having about $2 million for the annual operating budget. 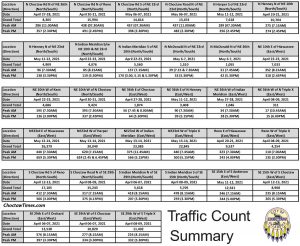 The traffic counts were completed through assistance from the Association of Central Oklahoma Governments.

“I believe the total cost per location came out to about $125, and we did 30 locations. ACOG will actually reimburse the city a portion of that cost,” said Simonds. “I’d like to see us continue this every year so we can actually see an accurate history of those counts.”

Ward 2 City Councilman Brent Pendergraft is working to replace his predecessor at the helm of a committee dedicated to addressing the city’s road problems.

Pendergraft was elected in April and says he’s currently gathering and reviewing existing information, and also seeking out Choctaw citizens to join the effort.