Fire code inspections will soon come with a cost in Midwest City.

Midwest City Fire Chief Bert Norton said the new permit fees will help the city recover some costs of the services and improve safety of buildings.

“The ultimate goal is to have the safest possible buildings for our people to work and operate in,” Norton said. “That’s the purpose of life safety inspections. It’s not meant to be a punitive thing to make people do something. Every code that we have can be tied back to some incident or some reason where there was a large loss of life.”
The permits and inspections are outlined in the International Fire Code.

Midwest City will begin charging a fee for annual inspections at all commercial buildings. The fees range from $50 to $100 per location. A building with a low hazard is $50, medium hazard is $75, and high hazard building is $100. The fire department had not been charging for the service. Religious and educational buildings are exempt from the fee.

Any building with a sprinkler system is required to have it inspected annually by a third-party contractor. The sprinkler systems are labeled with a green, yellow or red tag based on the condition of the system.

The fire department’s annual inspection will verify that systems are tagged but will not inspect the systems.

“Any existing buildings will only have the annual fee unless they trigger something new with new construction,” said Midwest City fire marshal Duane Helmberger.

New construction will be subject to permits and fees ranging from $50 to $100. These include such things as flammable and combustible liquids, hazardous materials and industrial ovens. Fire inspectors review all new construction to ensure all fire codes are followed.

“Our job is to make sure these systems are correct for the people who are going to use them,” Helmberger said. “But if all we can do is fail it and wait for them to fix it, there is nothing necessarily

to make the contractor do it. And now the citizen or owner has to delay their opening.”
The ordinance also includes a re-inspection fee of $50. Continued re-inspections are $100 per occurrence. Helmberger said they are often called to new construction sites numerous times to review issues.

“We have had jobs that we have gone to 8 to 10 times for things that shouldn’t drag on,” Helmberger said. “Those fees will be charged to that subcontractor who is responsible for the work in the first place.”

Norton said the re-inspections are done at the officer’s discretion.

“An officer can do it if there someone that’s not compliant with fixing what needs to be done,” he said. “Even if it’s a small business they can be faced with a re-inspection fee. That makes them have some skin in the game for them to make it right.”

Midwest City has about 1,800 commercial occupancies. The fire department has been completing about 80% of the annual inspections. Helmberger said they have completed all medium and high hazard occupancies the past few years, and most low hazards.

“The goal is to do 100 percent of the inspections every year,” Helmberger said.

The fire marshal’s office is staffed by four employees who handle inspections along with other duties. Norton said they plan to hire a new employee, who would help with inspections and community risk reduction.

“When I started at the fire department in 2001, there were six people in this (fire marshal) division, so we’re still down one person,” Norton said. “And on the fire suppression side, we had 27 people a shift assigned. Now we have got that back up to 26 people.”

While completing all of the annual inspections is the goal, Norton said he understands the fire department, like many others, are stretched thin.

“If something happens and we don’t get to five or six businesses, that’s something we’ll have to reevaluate why we didn’t get them done,” Norton said. “What was it that came in the way? Or was it just that we were busy?”

Norton said the fire department has been looking into the issue for a couple of years. The city’s ordinance review committee reviewed it last year.

Part of the review included a comparison with fees charged by other municipalities. Helmberger said they primarily looked at Oklahoma City and Tulsa which both have permit fees and use the International Fire Code.

Revenue from the fire inspection fees will go towards the fire department’s budget.

“I don’t want anyone to think I this is a way to get 100 percent cost recovery because it’s not,” Norton said.

The new fire inspection fees will be added to the city utility bills. They will begin on Jan. 1.

“We’re hitting the holidays now and this will give us a new year to start out,” Norton said. 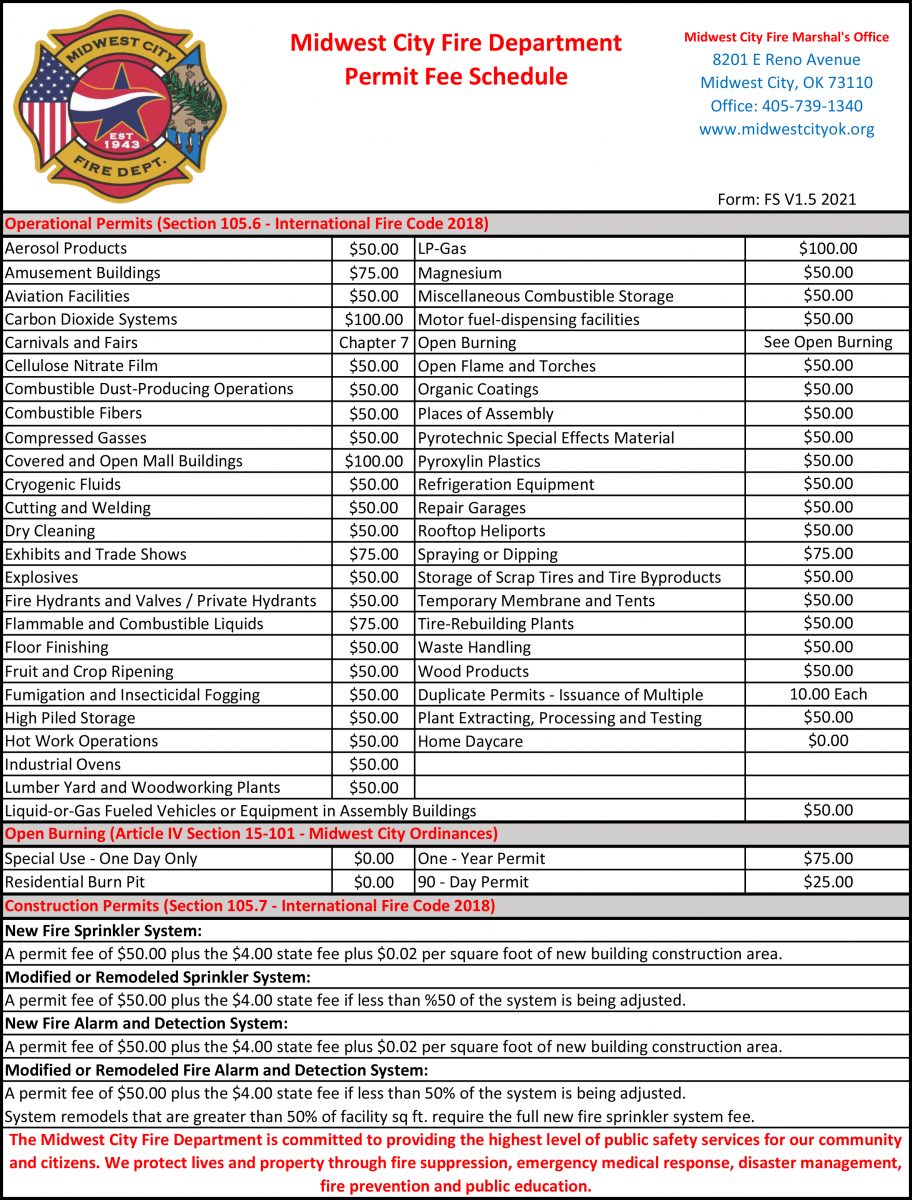 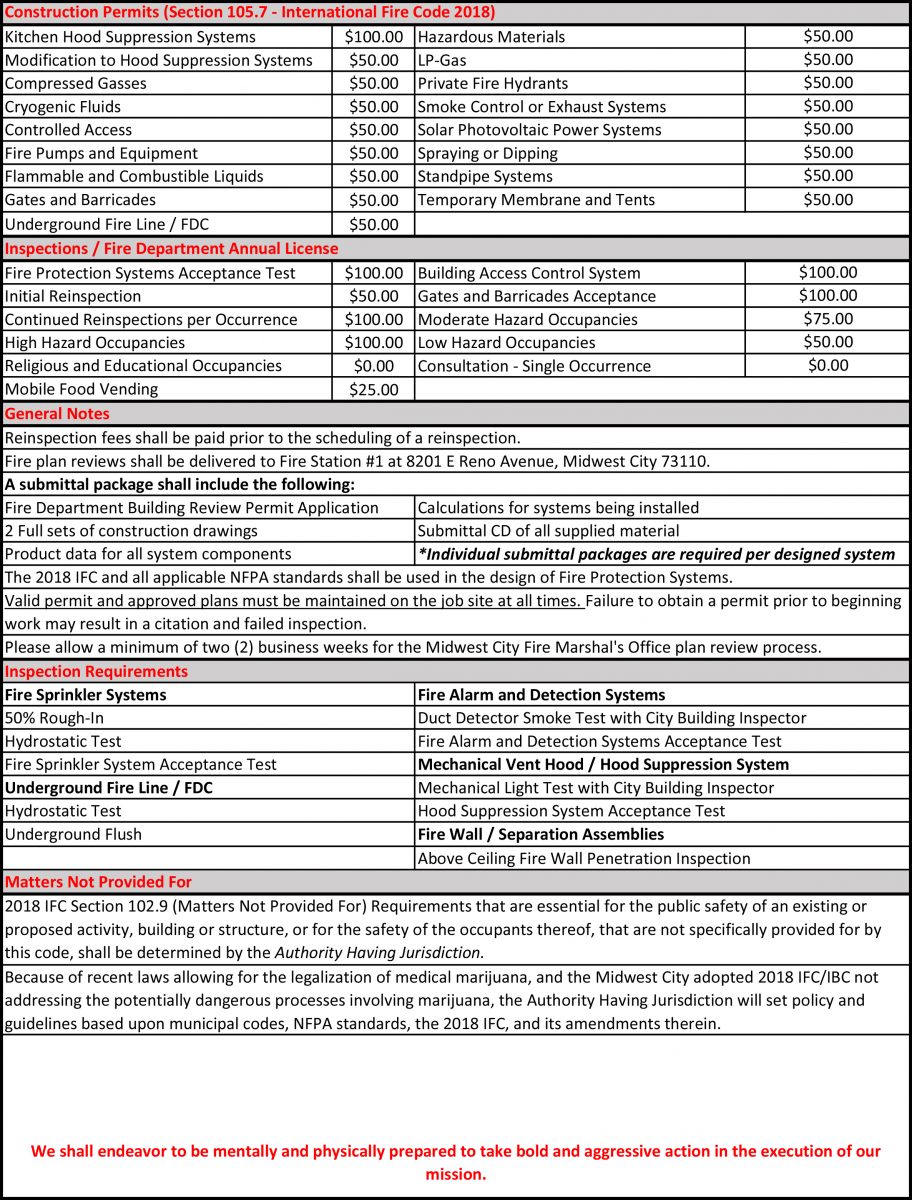