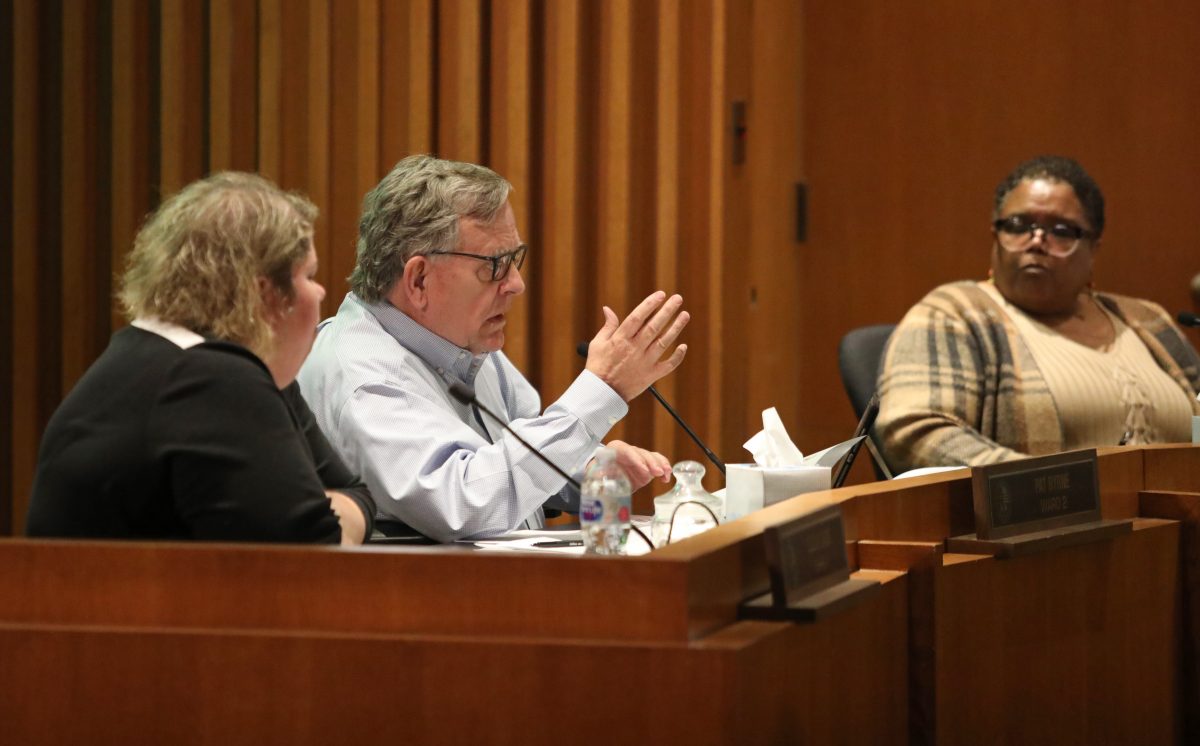 Ward 2 Coucilman Pat Byrne discusses concerns about the Regional Transportation Authority during a city council meeting on Dec. 14. The Midwest City Council voted to withdraw from the RTA. Photo by Jeff Harrison

Plans for a regional transit system in the metro will no longer include Midwest City.

The city council voted Tuesday night to withdraw from the Regional Transportation Authority of Central Oklahoma – a trust created to advance regional public transportation plans within the metro.

“I still think the RTA is an excellent idea. It’s an idea that should have come to us 30 years ago. But through several things happening through the RTA, I can no longer put forth the financial requirement in good faith for our citizens or continue participation in the RTA until some planning and other things take place,” Dukes said the city council meeting.

Efforts to create a regional transportation system started more than 15 years ago. In 2015, leaders from Oklahoma City, Edmond, Norman, Moore, Midwest City and Del City formally created the Regional Transit Task Force to further study the issue. The state legislature later allowed for the creation of a regional transit authority that can put forth funding requests from multiple municipalities. Representation on the board and financial obligations are determined by the population of member cities. 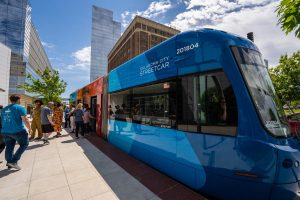 Midwest City has contributed about $88,000 towards the RTA. City leaders said they were asked to contribute an additional $113,000 and that number was later reduced to $74,000.

A regional transit system, which could include various forms of rail and streetcars, would likely be funded through a dedicated sales tax paid by participating municipalities. Midwest City officials oppose a sales tax and insist the project should be funded through other sources such as property taxes or a general obligation bond.

Dukes said a new sales tax would send Midwest City’s rate well into double digits. Midwest City’s current rate is 9.1% which 4.5% of that goes to the state. Municipalities in Oklahoma rely on sales tax collections to fund the bulk of their services.

Councilman Pat Byrne said with a sales tax election, Midwest City voters could have their voices drowned out by those in larger populated Oklahoma City, Edmond and Norman.

“I don’t think we should pass this on to our citizens with the possibility of having to pay this sales tax,” Byrne said. “… I originally was for this. I thought it was a good idea, but when you get down into the weeds and realize what is in the weeds. I don’t think it’s good for the citizens.”

Byrne also pointed to uncertainty about the future of the Oklahoma County Jail. Local leaders have expressed the need to build a new jail which could be funded through a new sales tax.

The RTA plans include a hub in downtown Oklahoma City that would run north to Edmond, south to Moore and Norman, east to Midwest City, Del City and Tinker AFB. The group has also discussed a west corridor that would connect Yukon and Will Rogers World Airport. Midwest City officials say they’re not sure the proposed route would serve residents and the city’s economic centers.

Dukes said they are unsure how Tinker Air Force Base would be connected to the route. Due to the size of the base and security measures, a secondary transit system would be needed to circulate riders to different areas on base.

“You can’t just drop people off at the main gate. It ticks me off that Tinker has intentionally or unintentionally not been at the table,” Dukes said. “To exclude the largest employer in the state out of something like this is crazy.”

When the RTA was created, it was put under the direction of the Association of Central Oklahoma Governments. The agency advocates for regional cooperation and addresses common issues among municipalities and counties with a focus on transportation, 911 and public safety, community and economic development and water resources. ACOG also administers and manages state and federal grant programs.

In early 2020, the Central Oklahoma Transportation and Parking Authority, also known as EMBARK, took over administrative duties for the RTA after approval from the RTA board.

Dukes objected to the change which he said also caused the group to lose about $750,000 in funding for studies.

“It made sense for ACOG to administer the program. ACOG is the pass through for federal highway funding and they have the infrastructure and things in place to do it,” Dukes said. “For whatever reason the consultant we hired did not like the ACOG setup and convinced the representatives from Oklahoma City, Norman and Edmond to pull out from ACOG.”

Midwest City leaders say they will continue to follow progress of the RTA and could potentially rejoin the group in the future.

Del City Mayor Floyd Eason shares many of the same concerns but said the city is not planning the leave the RTA.

“We’re taking a wait-and-see approach and seeing if things can be corrected,” Eason said. “We support Midwest City in their decision but it’s the not the right time for us.”

Eason said the biggest concerns for Del City include service to Tinker and location of the east corridor. 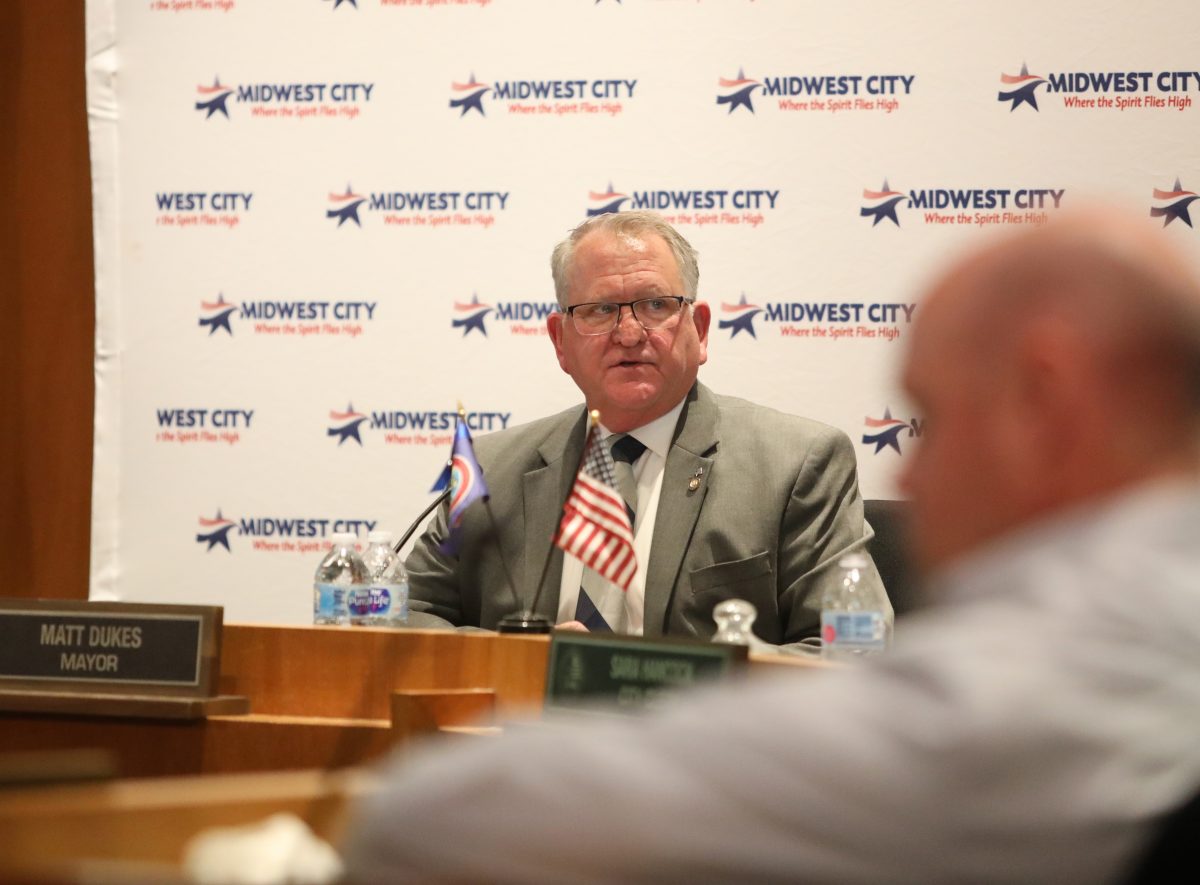 Mayor Matt Dukes speaks about the Midwest City’s decision to withdraw from the Regional Transportation Authority during the Dec. 14 city council meeting. Photo by Jeff Harrison