The Choctaw-Nicoma Park School District is earnestly preparing a school bond proposal to present to citizens of the district in early 2022.

Officials say thanks to voter support of the last bond issue, passed 14 years ago, this new bond proposition comes without a tax increase.

A special election has been slated for consideration of voters residing within the Choctaw-Nicoma Park School District.

If approved, that funding would allow the district to take on major improvements, while not raising taxes on property owners.

Officials hope the many school improvements made in recent years, following the approval of the last bond issue in December 2008, will encourage voters to continue their trust in the district.

District officials are working with architects to finalize a long list of improvements, and specific details on bond projects will be presented in January.

Officials say safety improvements will be key as the district prepares for rapid growth.

“The general theme of the of the bond will be safety and security for our students and staff,” said CNP Superintendent David Reid. “The bond will provide tornado saferooms at all sites that do not presently have them, double locking secure entryways with camera and buzz in systems, security camera upgrades, additional classroom space to remove the necessity for outdoor portable buildings, etc. We will also be looking to help traffic issues with parent drop off/pick-up lanes utilizing existing land owned by the district.”

Officials say the bond approval would benefit every existing class, student group, organization and sports team in the district, while preparing for new students that are expected to arrive in unprecedented numbers. 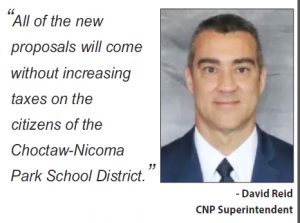 “In addition to upgrades to the physical safety and security of our buildings, the bond will assist in providing support to the academic and extracurricular needs of our students,” said Reid.

“Forward thinking requires additional structures to house the students forecasted with over 3,500 units/plots of land slated for homes to be built within municipalities that make up the CNP District. To address this growth, the district is proposing to build two new elementary sites and to replace the main building at Choctaw High School.“

The CNP School District is much larger than municipal boundaries of the City of Choctaw and Nicoma Park, and also include residents within Midwest City, Harrah and Oklahoma City.

New housing developments currently being constructed or planned within the CNP School District include new home estimates of at least 1,400 within Choctaw, 1,100 in Midwest City, 600 in Harrah and 500 units in Oklahoma City limits.

Officials say that totals around 3,700 currently planned houses, duplexes and apartments that could potentially be sending new students to district schools in coming years.

A series working through proposed school improvements will be published next month as architects and district officials finalize plans.

“We look forward to presenting the specific details of this upcoming bond issue with the citizens in mid-January, and I reiterate that all of the new proposals will come without increasing taxes on the citizens of the Choctaw-Nicoma Park School District,” said Reid. 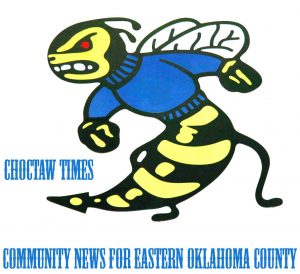