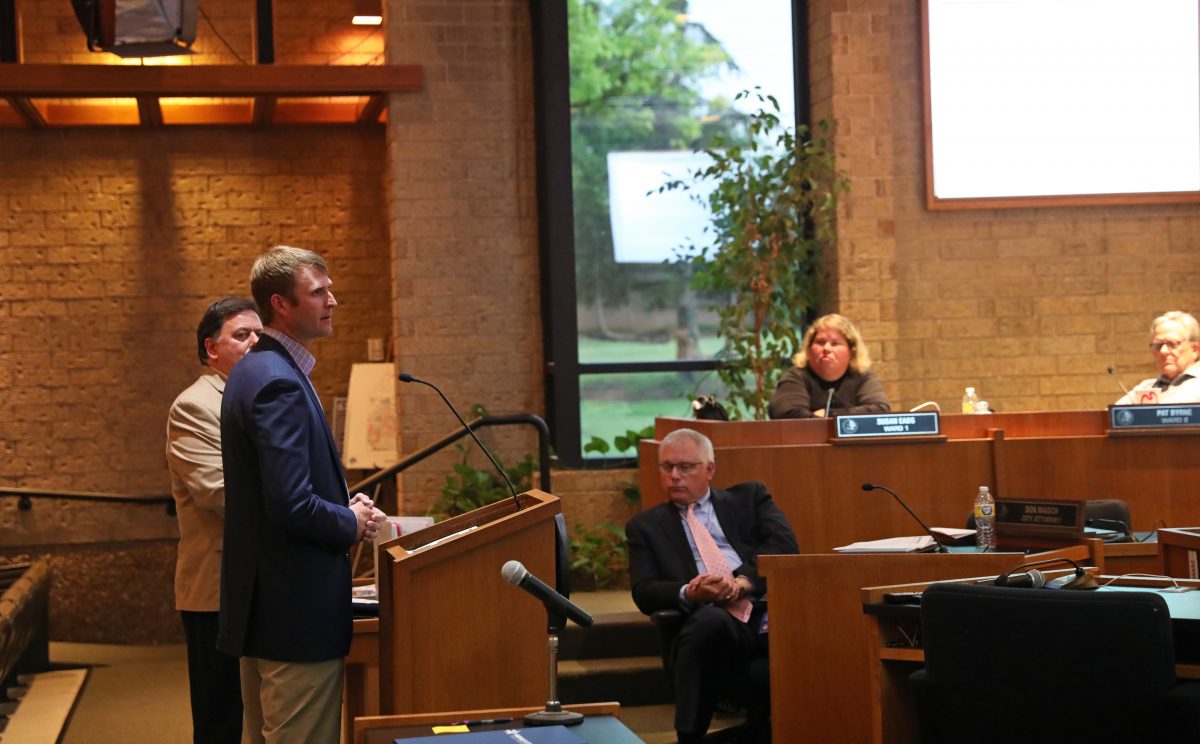 Jimmy Harrison with Centrillium Proteins, LLC, speaks about his company’s plans to build a 55,000-square-foot food processing plant on the north side of Midwest City during a May 24 city council meeting. Photo by Jeff Harrison

A food processing company announced that it plans to open a new plant on Midwest City’s north side.
Centrilllium Proteins, LLC says it will employ about 100 people at a new 55,000 square-foot-facility located on NE 36th St., just west of N. Midwest Blvd. and across the street from the former animal control center.

Midwest City leaders last week agreed to sell 24.03 acres to MTG Property Holdings, LLC which will construct the food processing plant and lease it to Centrillium Proteins.
The Midwest City Economic Development Authority agreed to sell the vacant land for about $348,000 minus closing costs and approved a real estate agreement with MTG Property Holdings. The project is expected to cost more than $20 million.

Robert Coleman, economic development director, said they have been working with Centrillium for about eight months. He said the company would bring good paying jobs to the north side of the city.

As part of the agreement, Midwest City will extend all utilities to the site, which includes construction of a sanitary sewer interceptor, lift station and forced main. The utility improvements will cost about $1.6 million. The city will also oversee construction of a rail switch and spur to service the site.

Jimmy Harrison with Centrillium gave an overview of the company and presented designs for the facility. He spent much of his career with Cargill, Inc. but left seven months ago to start a new company. He said he saw a gap in the market for specialized needs of mid-tier customers.

The plant will serve both custom orders for restaurants and retailers, as well as contract work for larger customers such as Cargill. They will also produce tallow, or animal fat, which will be used for production of pet food and renewable and biodiesel. The tallow will be transported by the rail spur and truck.

All the products will be come into the plant raw.

“We’d bring in whole primal cuts like a ribeye, strip or chuck roll,” Harrison said. “We’d break them down and package them.”
The protein recovery portion, which will generate the tallow, will operate on two shifts.

Harrison said they selected Midwest City for their new plant based on the location and potential workforce.

City leaders will also need to approve establishment of the project plan, and a separate development assistance agreement. The city plans to create a TIF District that will be used to fund some of the improvements for Centrillium as well as Global Turbine Solutions, which plans to operate an aircraft engine repair facility in the Soldier Creek Industrial Park