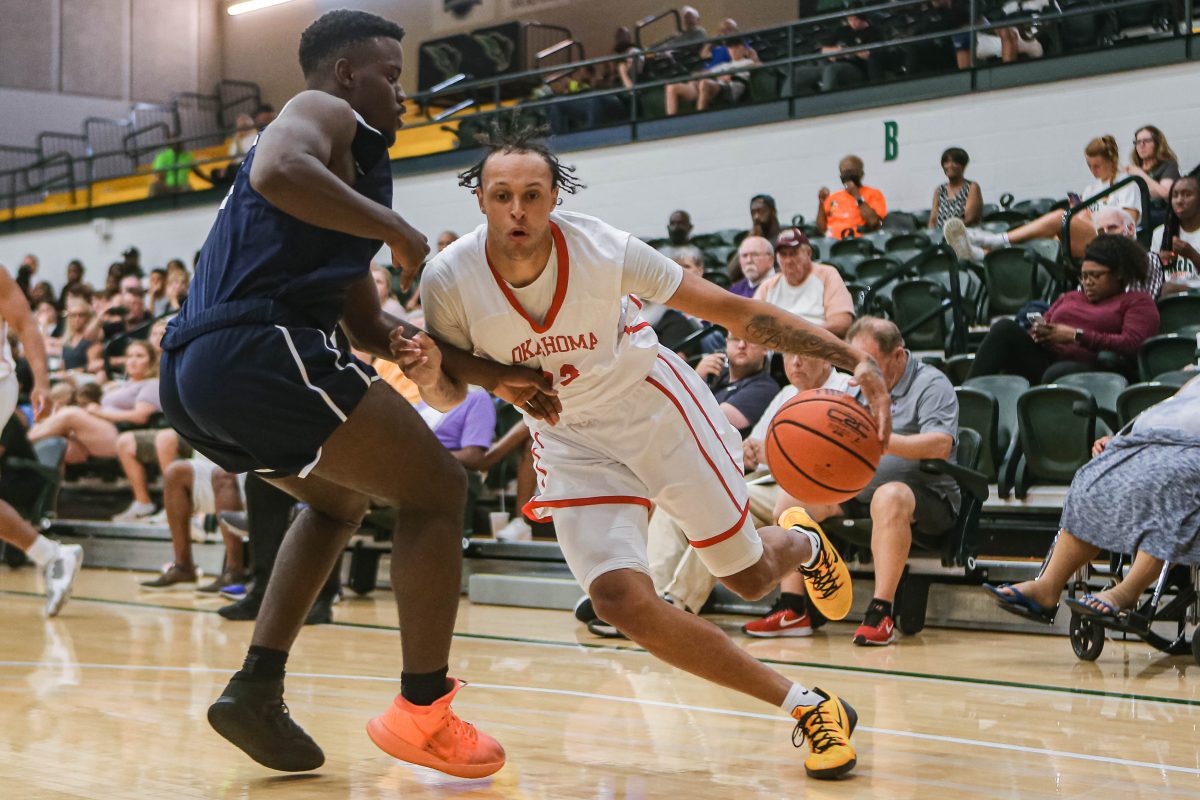 Midwest City’s Jacobi Sebock (22) works past a defender as the Oklahoma High School All-Stars face the Texas All-Stars in the Faith 7 Bowl at Oklahoma Baptist University in Shawnee on Saturday. Photo by Nathan J. Fish The Oklahoman

SHAWNEE —Midwest City standout Jacobi Sebock opened the second half with 12 straight points to boost the Oklahoma boys to an easy 127-98 rout of Texas in the 56th annual Oklahoma-Texas Faith 7 Basketball Classic at OBU.

The Oklahoma boys led, 26-20 after one quarter but exploded for 39 in the second period to expand the margin to 65-39 at halftime.

After Sebock’s burst boosted the lead to 70-40, the rout was on.

Bradyn Hubbard of Tulsa Memorial was the MVP for Oklahoma with 24 points, 15 rebounds and two blocked shots for the Oklahomans. Carl Albert’s Jay Price was the coach for Oklahoma and instilled his basic Titan philosophy of sharing the ball with all 9 players on the Oklahoma roster hitting double figures.

In addition to Hubbard’s 24, Kevin Overton of Norman North had 19, Arzhonte Dallas of Lawton Mac had 16, Tyreece Frierson of Tulsa Memorial added 13, Sebock had 12, JV Seat of Edmond Memorial and Ben Averitt of Jenks and Caden Fry of Owasso each had 10.

The victory lifted the Oklahoma advantage over Texas to 38-23 for the series.

The name of the game comes from the Faith 7 Space Shuttle piloted by Shawnee resident Gordon Cooper. The annual affair is a charity event for the Faith 7 Activity Center which provides activities and training for challenged adults in the area.

Sebock will play at Northern Oklahoma State College in Tonkawa this fall. He averaged 16 points and 7 rebounds for the Bombers and picked up the MVP trophy at the Bruce Gray Invitational that the Bombers won and made the All-Tourney team at Putnam City. He was Player of the Year in the Big 8 Conference and was a unanimous choice for All District, Big All-City and All-State teams.

He sparked the Bombers to a 19-9 record against a rugged schedule and a berth in the OSSAA Class 5A State Tournament.
And the win over Texas?

“That was lots of fun. This was a great group of guys to play with. Coach Price likes a sharing offense and we had the studs to pull it off. I think the Texas boys underestimated and they weren’t ready for our team approach,” he said.

Sebock was the odds-on favorite for the dunk championship at halftime but couldn’t get his between the legs underhand scoop to fall on his third try. Still, he had the most impressive dunks of the competition.

The Bomber flash was slapped with three fouls in the early going which threw off his rhythm, resulting in just two-point follow shot in the second period for his only score in the first half but his mates took up the slack and bombed in 39 points in the second period to take a 65-39 halftime advantage.

But Sebock was far from through. He took the in-bounds pass to begin the second half and drove the middle for a power dunk, then raced back down the court, snared the defensive rebound passed off to JV Seat, then took the return pass for a layup.

Overton, who had 8 assists for the game, found Sebock on the wing for a swish from the key for his third straight bucket of the half. But Hubbard grabbed a rebound and fired a length of the court pass to a streaking Sebock to increase the lead to 71-39.

But Sebock was hot and had perfect position on the next offensive set to putback a shot by Frierson and then capped off his 10-straight point streak, intercepting a mid-court pass and slamming in a rim-rattling dunk.

He was slapped with his sixth foul when he was across the court from the victim to head for the bench but Jacobi had already made his statement.

Mustang standout Talia Pogi was one of four players in double figures as the Oklahoma girls erupted in the third period for 26 points to defeat the Texas All-Stars in the opener, 88-68.
Pogi had 11 points on 4 of 5 from the field, including a pair of treys, and a free throw to go with five rebounds, three assists and a steal in 20 minutes of action.

The Classes SAS power trio of Darianna Littlepage-Bugg (16), Jordan Harrison (14) and Micah Gray (17) were the other double digit scorers and clearly demonstrated why they easily romped to the OSSAA State Class 4A championship.

Bugg was the Oklahoma MVP.