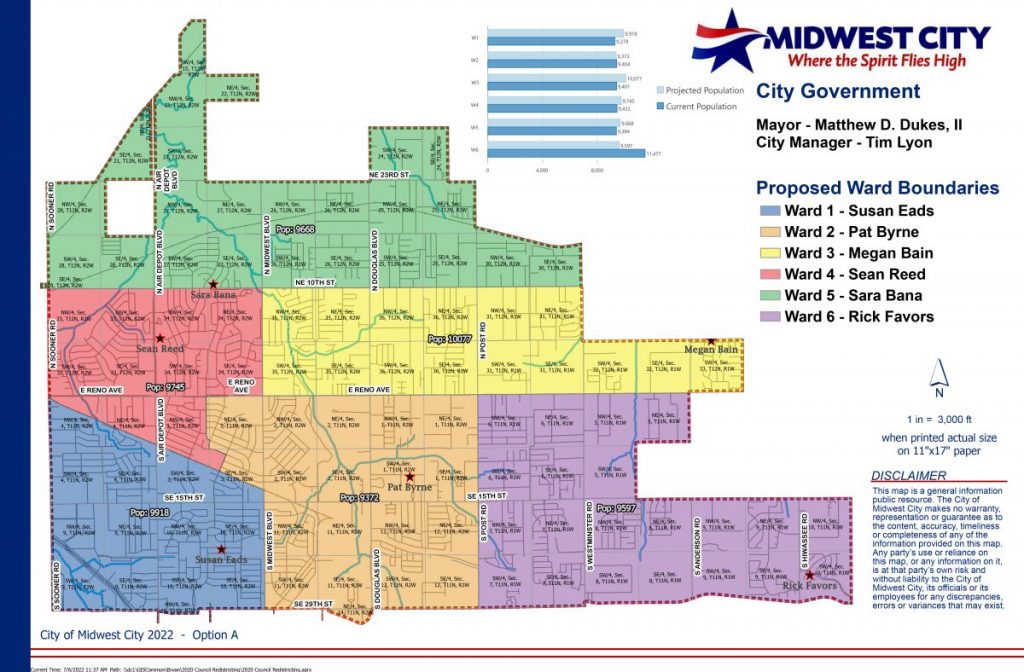 The six districts of Midwest City will soon be having boundary changes. The City of Midwest City presented a new map July 26 during a city council meeting at Municipal Court.

No action has been taken yet, as the city is required to give a 30-day notice of vote on the boundary change. The hearing was held to introduce the proposed changes and allow for any questions from the council or the public. The final determination of the map will be held at the Aug. 23 city council meeting.

Every 10 years the six wards of Midwest City are redrawn to ensure an equally distributed population. Each ward is sectioned according to how many residents maintain a certain area.

There will be no splitting or adding wards to the existing districts of Midwest City but a redraw of the ward map to ensure an even population distribution. The current city council members will stay within their current wards.

The city council members did not have any involvement in redrawing the boundaries to ensure a fair representation.

The six wards have individual representatives, with Susan Eads for Ward 1, Pat Byrne for Ward 2, Megan Bain for Ward 3, Sean Reed for Ward 4, Sara Bana for Ward 5, and Rick Favors for Ward 6.
Presenting this topic at the meeting was Don Maisch, the City Attorney for Midwest City.

“Every 10 years when the Federal Census is done we are required to take a look at the population of wards within Midwest City to determine if the population of wards are substantially equal in population,” said Maisch. “That term has been defined by state statute-meaning there cannot be more than a 10 percent diffraction from the smallest ward to the biggest ward.”

“We found our population to in fact be outside those (10 percent) parameters. The difference between the largest and the smallest ward is about 13 percent at the present time,” said Maisch. “With these changes, the difference between the smallest ward and the largest will be 7 to 8 percent. So we will now be within 10 percent and will meet state requirements.”

The biggest boundary changes come in Ward 6 where most of the population growth has occurred over the last 10 years.

The current and proposed ward boundary maps and supporting information can be found at the Midwest City website by clicking the top banner titled“2022 Ward Redistricting”.