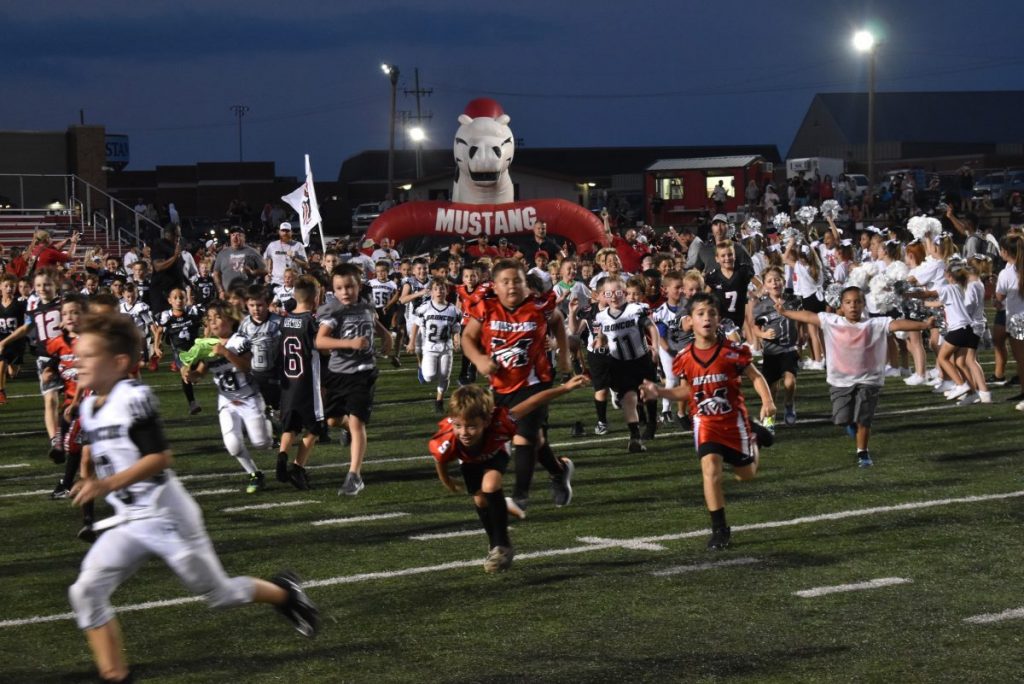 Youth football players from all over the area ran out of the Mustang tunnel during the Bring Out the Broncos festivities. Photo by Michael Kinney

The Mustang football team held its annual intrasquad scrimmage Saturday at Bronco Stadium. However, the scrimmage may have actually been the one time during the day at coach Lee Blankenship was able to finally relax.

The annual Bring Back the Broncos has turned into more than just a scrimmage. It is now a full-scale community event that not only involves the football team but cheerleaders, youth football teams, food trucks and horses.

“It means my voice is horse for one thing. Cause we start at 3:15 and I’m on the microphone as the MC,” Blankenship said. “We had people here today that didn’t have any kid in the program. They just wanted to come and see what was going on. And it really just facilitates a sense of unity in our town.”

Every year that Mustang has held the Bring Out the Broncos it has gotten bigger and spread throughout the Mustang community.

“It was awesome, man,” Blankenship said. “I was able to just to look around throughout the course of the day and just see the community just supporting our program. Every little boy ages, four years old to a senior in high school ran out that tunnel tonight and got reps on this field. It’s a special thing. That’s been a vision of mine since I got the job here and it’s really cool just to see it all come together.”

Starting at 3:30 p.m. there were scrimmages taking place throughout every age group. Every team that competed in the youth leagues was able to get out and play in front of the fans.

Then the Bronco’s freshman and junior varsity squads were able to get out and scrimmage among each other as well.

Mustang’s varsity took the field last at 9 p.m. Their first and second teams faced off for close to a half hour before closing the evening out.

While it was just a short scrimmage, Blankenship was impressed with what he saw from the defensive unit, who only gave up a couple of touchdowns, including a deep throw from quarterback Tristen Russell down the sideline.

Players such as Trevor Price and Zach Warren were roaming the field looking for players to hit and knocking balls loose.

“The defense was flying around and hitting hard,” Blankenship said. “I was really excited to see that they were flying around. We’re long and athletic in that secondary this year. I think we’re as athletic as we’ve ever been. So, I am just excited to see how we keep developing. We got a shot.” 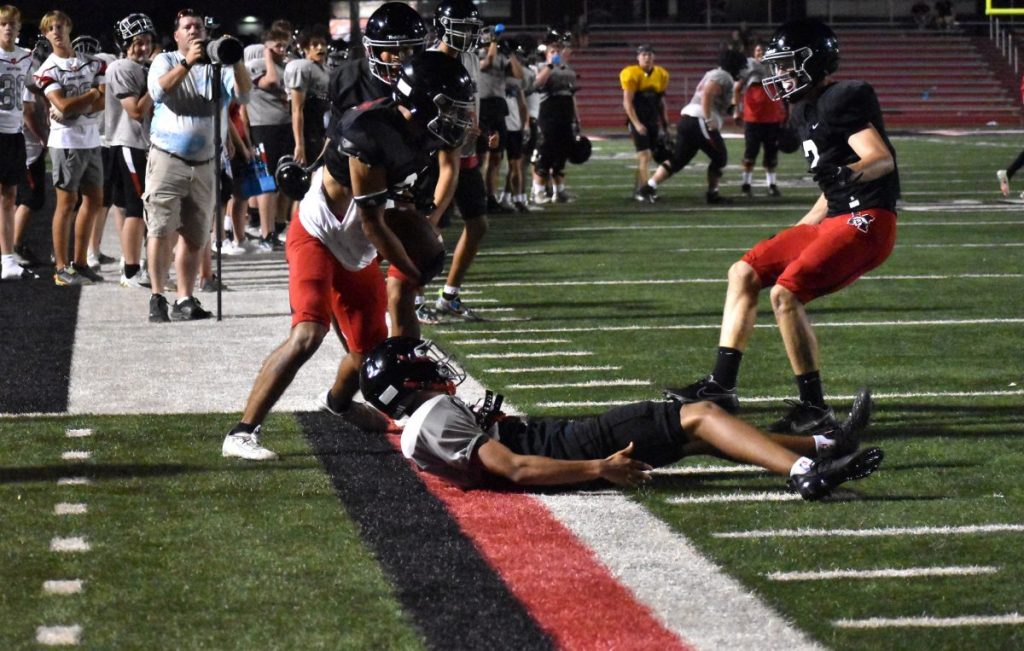 The Mustang defense had the edge over the offense Saturday night at the Broncos’ intrasquad scrimmage. Photo by Michael Kinney