A total of 10 contestants competed in the pepper eating contest. Each challenger started with a variety of 14 peppers on the lineup, and the group eventually dwindled down to just three finalists. 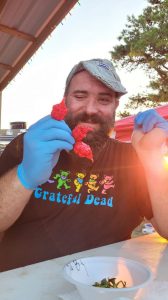 Nathan Bean shows off some peppers appropriately named “The Beast” grown nearby at Pepper Ridge Farm.
(PHOTO BY DON JUDSON)

The tie breaker between the spicy trio was to eat the final few peppers quickly and stand up.

Nathan Bean took the title, Brian Pingleton was runner-up and Will Ireton finished in third.

The final pepper eaten was The Beast, grown at Choctaw’s Pepper Ridge Farm. 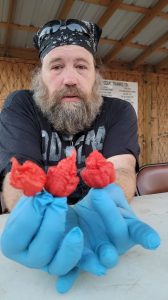 The Huffman Family Farm was another local pepper grower with peppers in the contest.

Wiley One Sauce made a special hot sauce that consists 100 percent of produce from the Choctaw Creek Park Farmer’s Market. 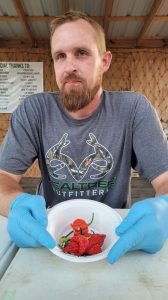 Will Ireton prepares to face “The Beast” in the tie breaker of the second annual Choctaw Pepper Eating Contest. (PHOTO BY DON JUDSON)

Friday night’s market featured 52 vendors and hundreds of spectators in attendance to spectate the pepper eating and shop locally made and grown products.