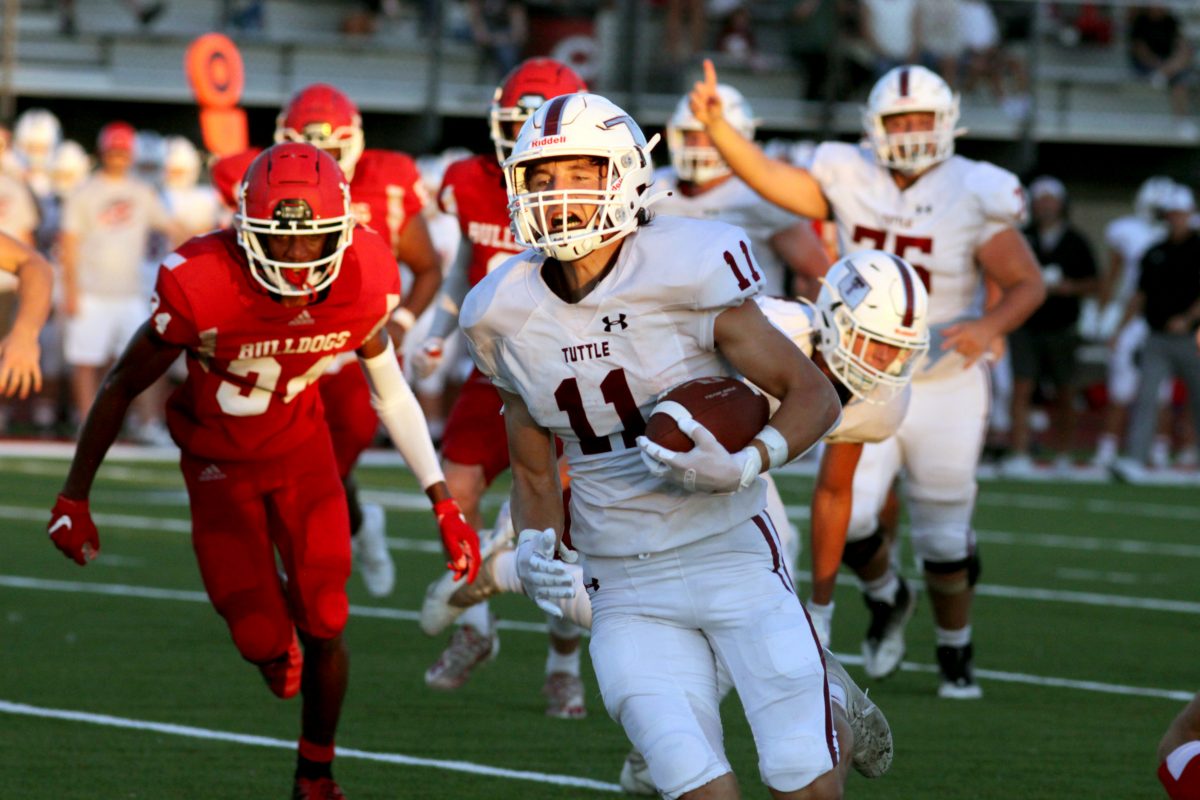 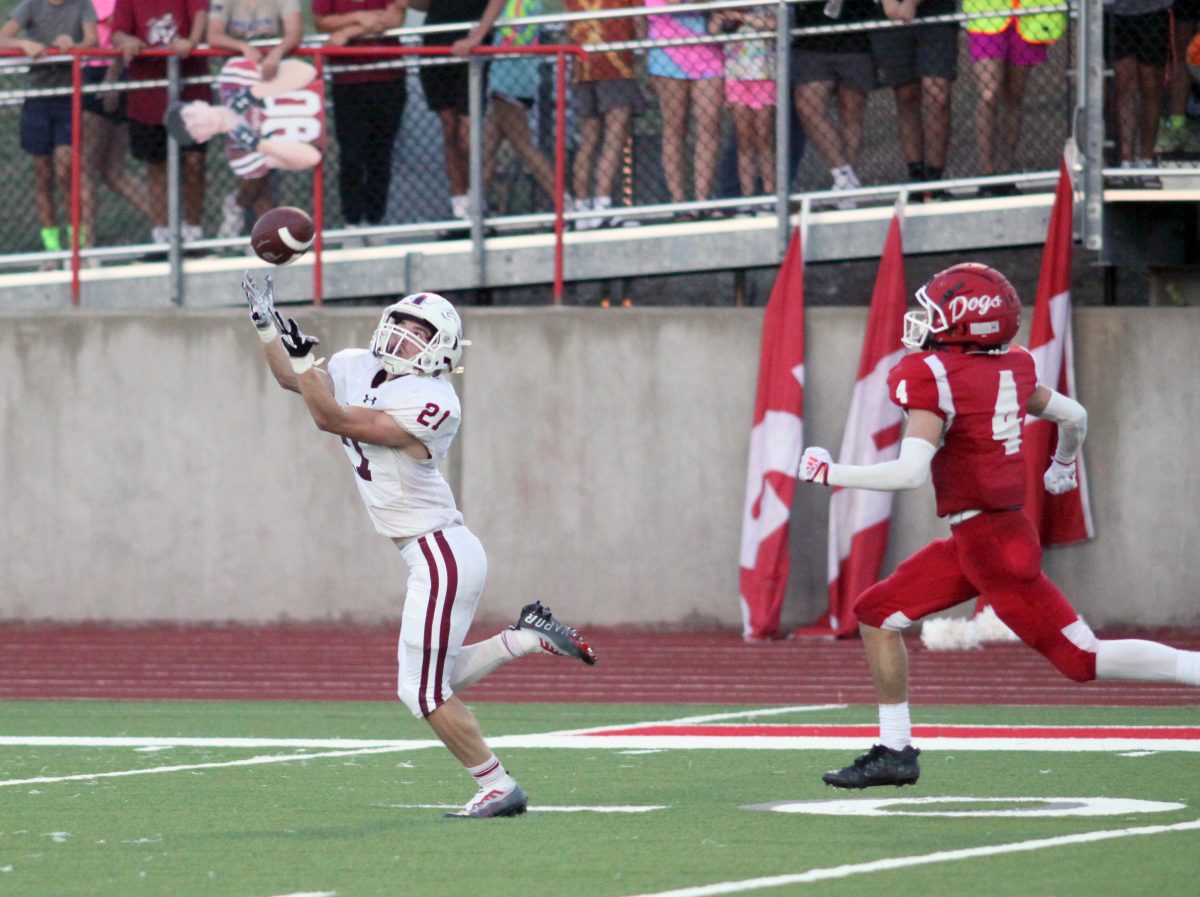 After a scoreless first quarter, Tuttle scored three unanswered touchdowns in the second, entering halftime up 20-0. Cache would eventually get on the board, but would not come within two scores the rest of the game. 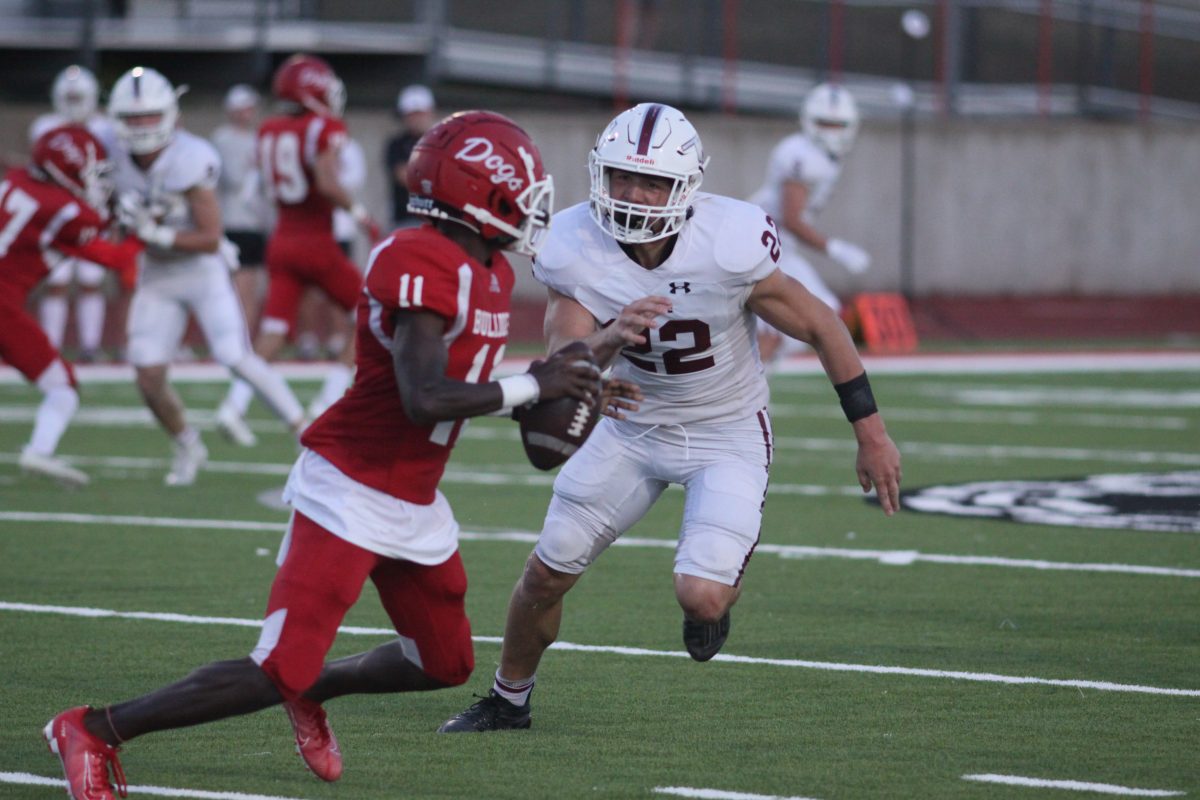 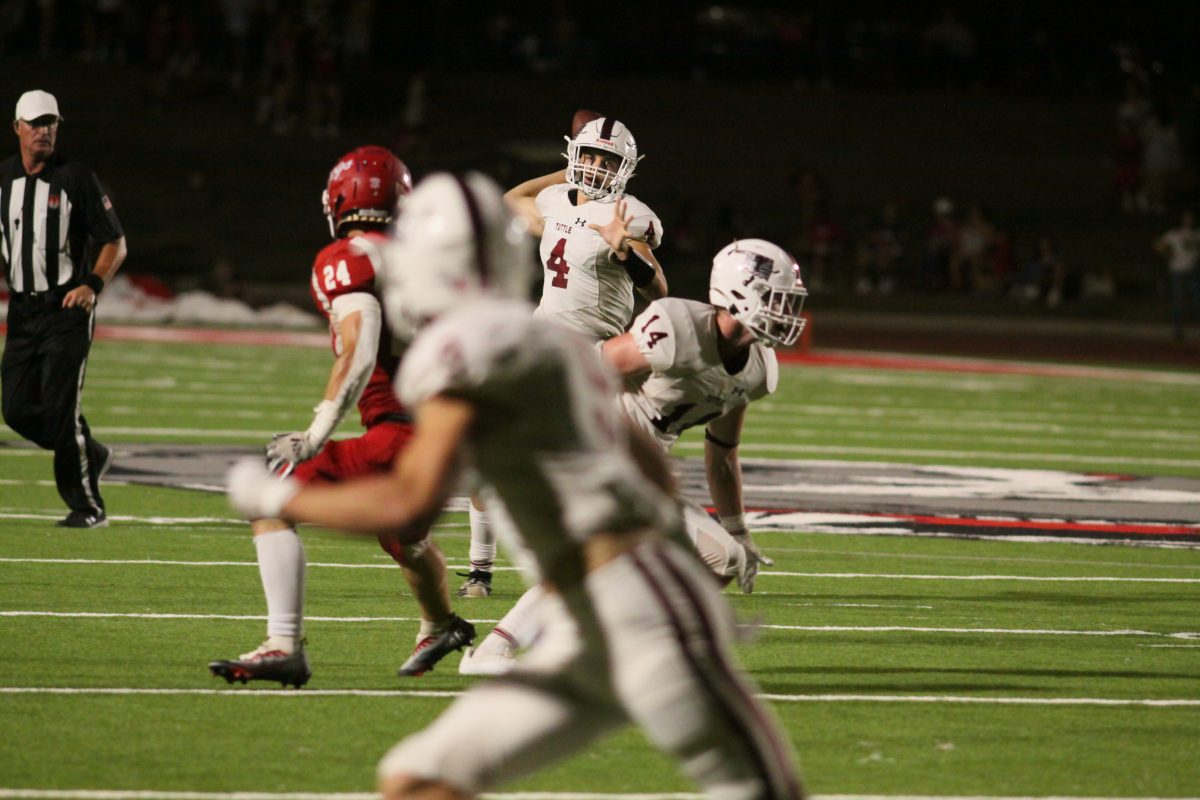 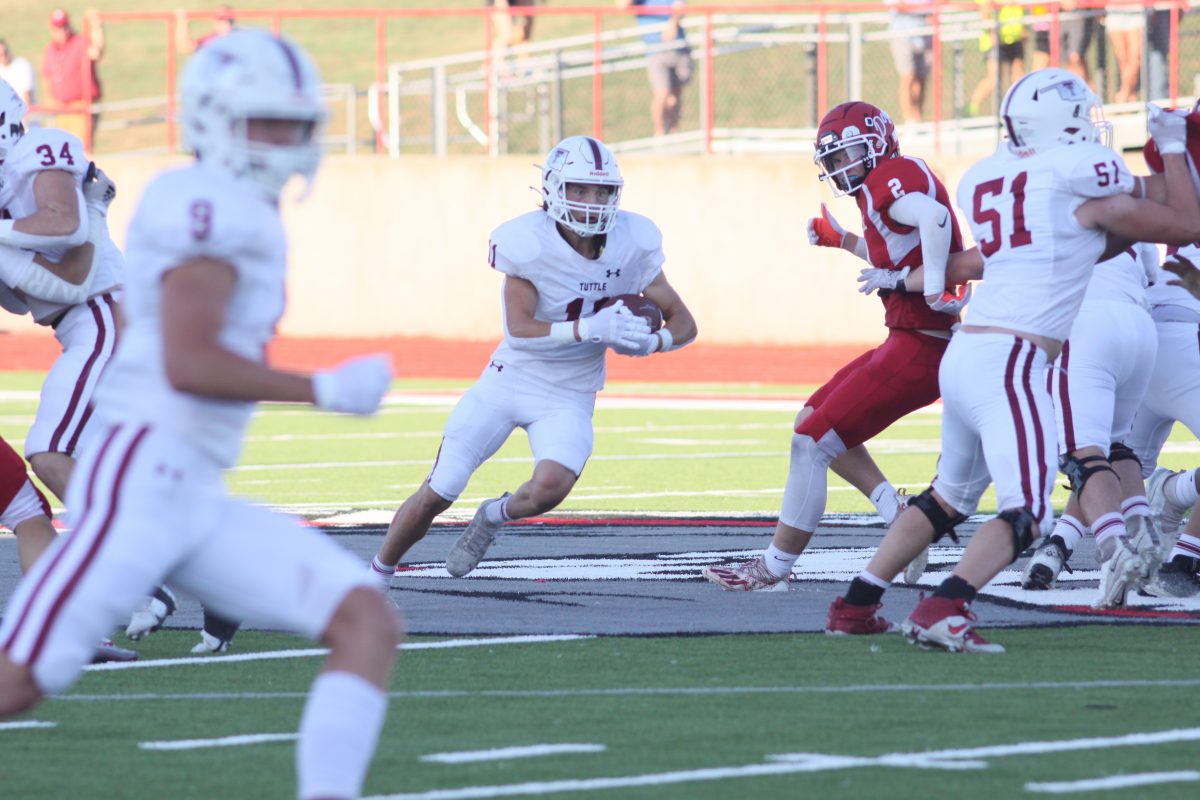 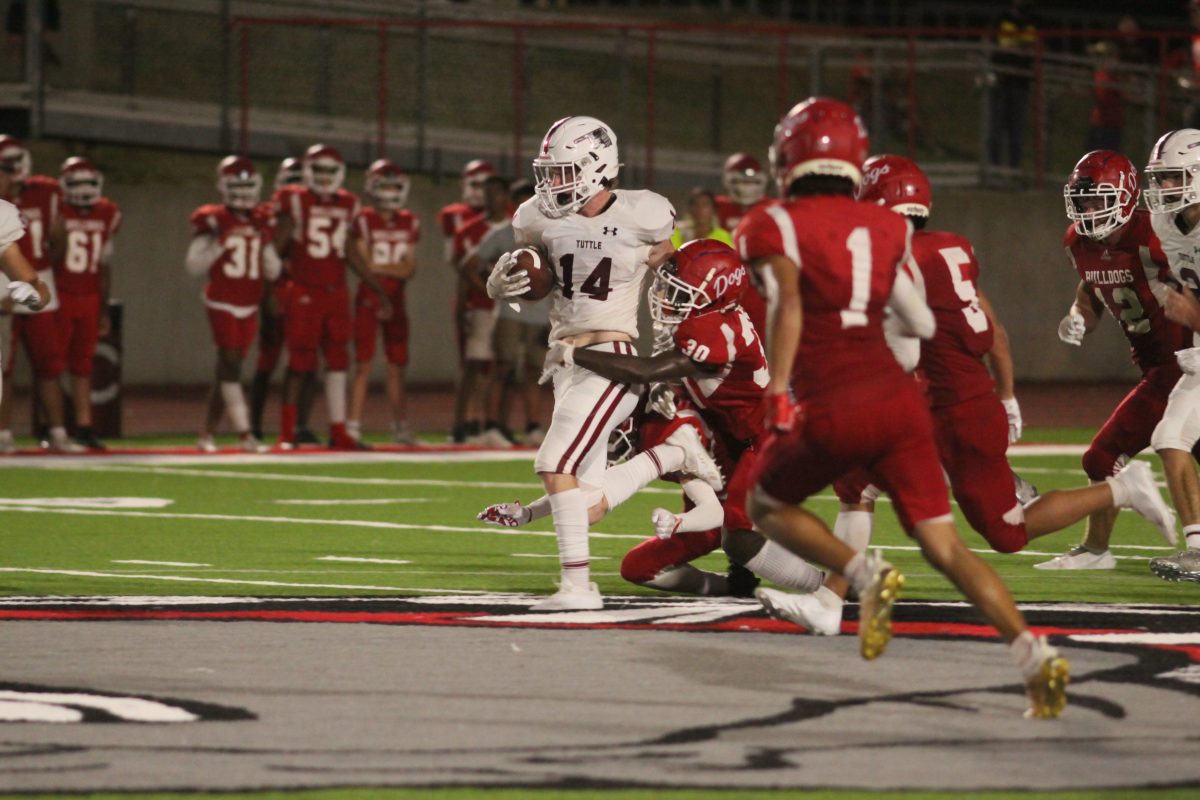 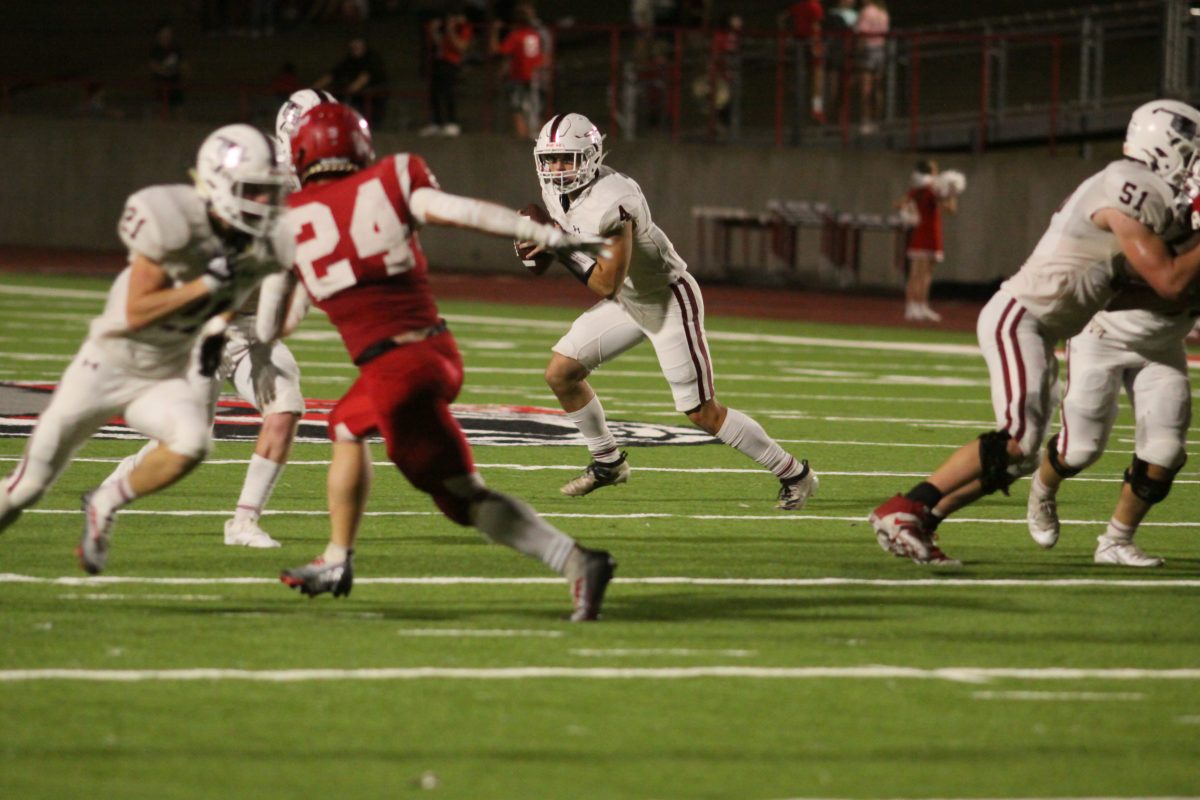 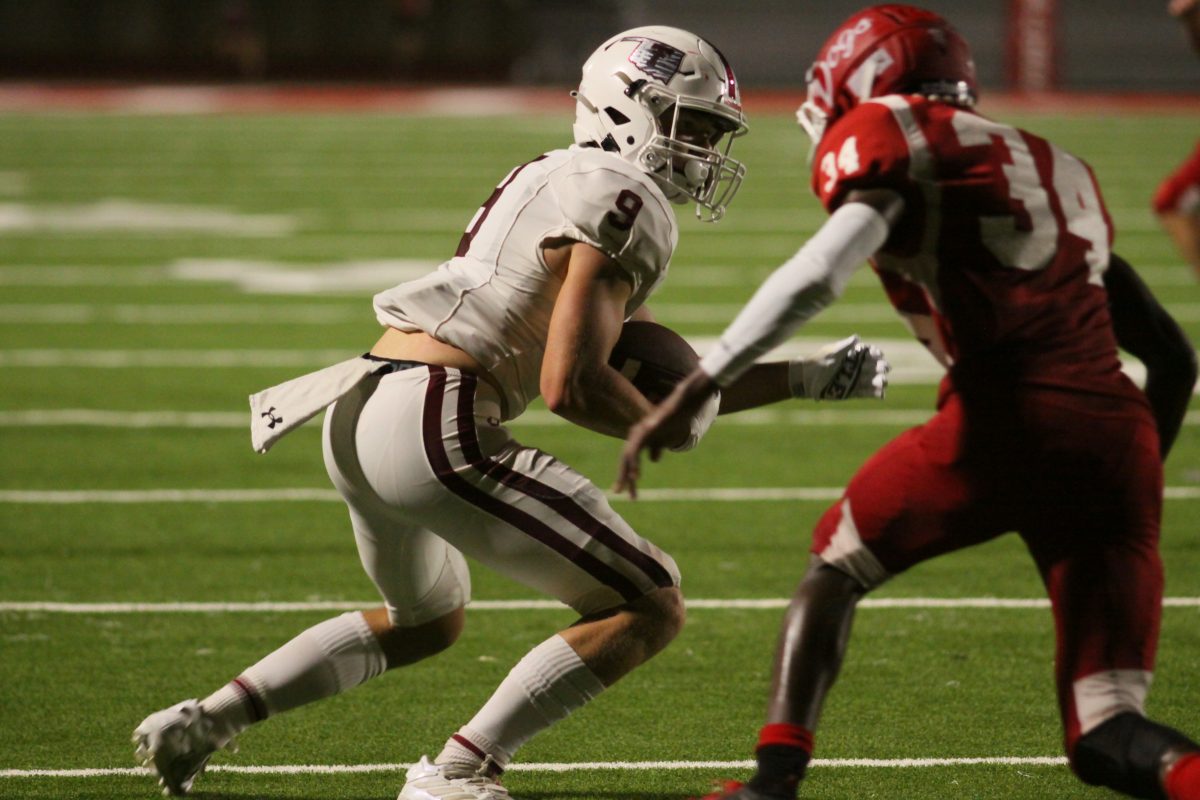 “We had 411 yards of offense and they had 218,” Tuttle Head Football Coach Brad Ballard said Monday. ‘We had 197 passing, 214 rushing, 24 first downs. I thought the negative from the other night was just the penalties and busted assignments. Those would be the negatives, but those are things that we can fix. The positives are that I thought we played hard, we hustled really well, and our conditioning was good. Those are always things you’re looking for offensively. We did well moving the chains several times, converted on third down really well, going 6-of-10 there, which is good. And then on the other side of that, our defense did a great job on third down. Cache was only 2-of-12 on third-down. We had one turnover. We threw an interception. That was no good, but they had two, so we came out plus-one in the turnover battle. I thought we were pretty balanced. It was a good night. We did some things good, but we have things we can get better at. We got to go get better at them. We’re going to go back to work. We don’t have any information on our next opponent yet, so it’s all about getting better this week.” 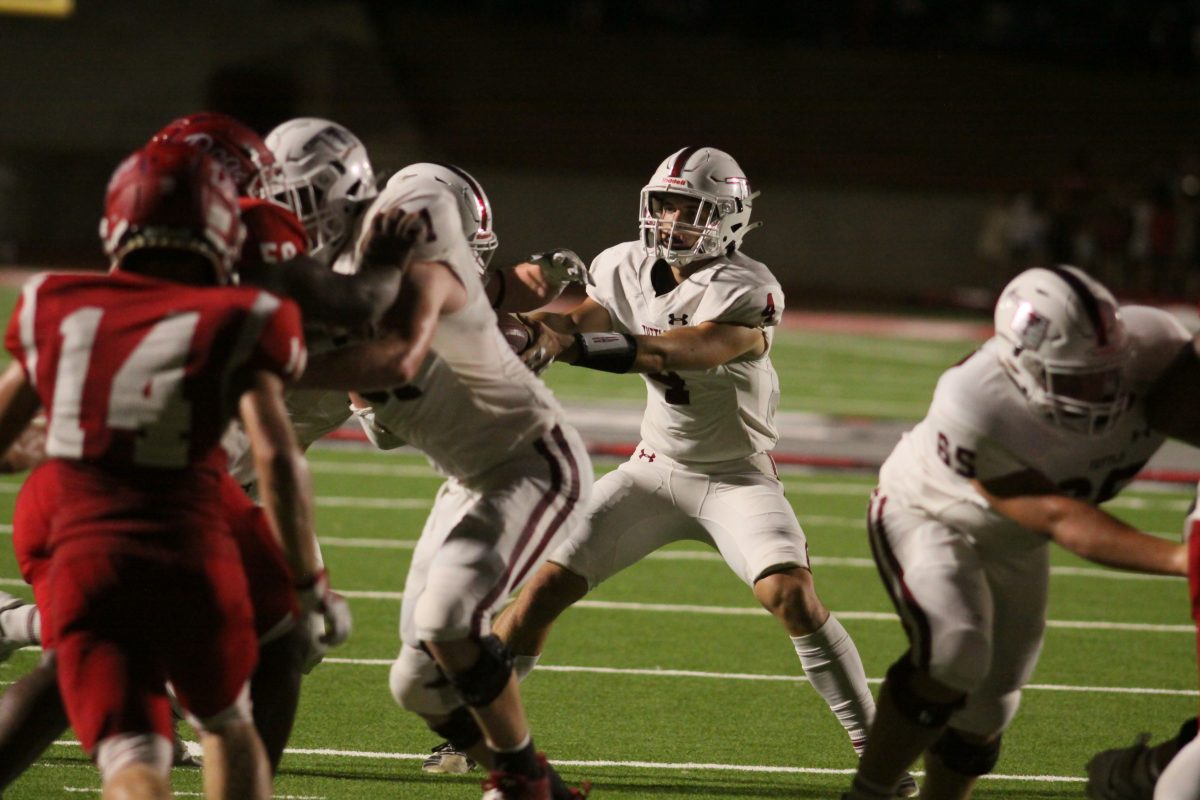 Cache started the game with the ball, and converted once before having to punt. Tuttle had early success from sophomore running backs Luke Fallwell and Brady McAdoo, but the Tigers were forced  to fight a battle of field position throughout the first quarter, struggling with penalties on both sides of the ball.

The first big pass play for Tuttle was a connection between senior quarterback Mason Dennis and junior receiver Mark Douglas about halfway through the second quarter. Tuttle then made their way into the red zone thanks to a penalty against Cache. McAdoo finished the drive with an 11-yard touchdown run for the first score of the game, with 7:09 left in the first half. Kyler Clapper hit the point after kick for a 7-0 lead. 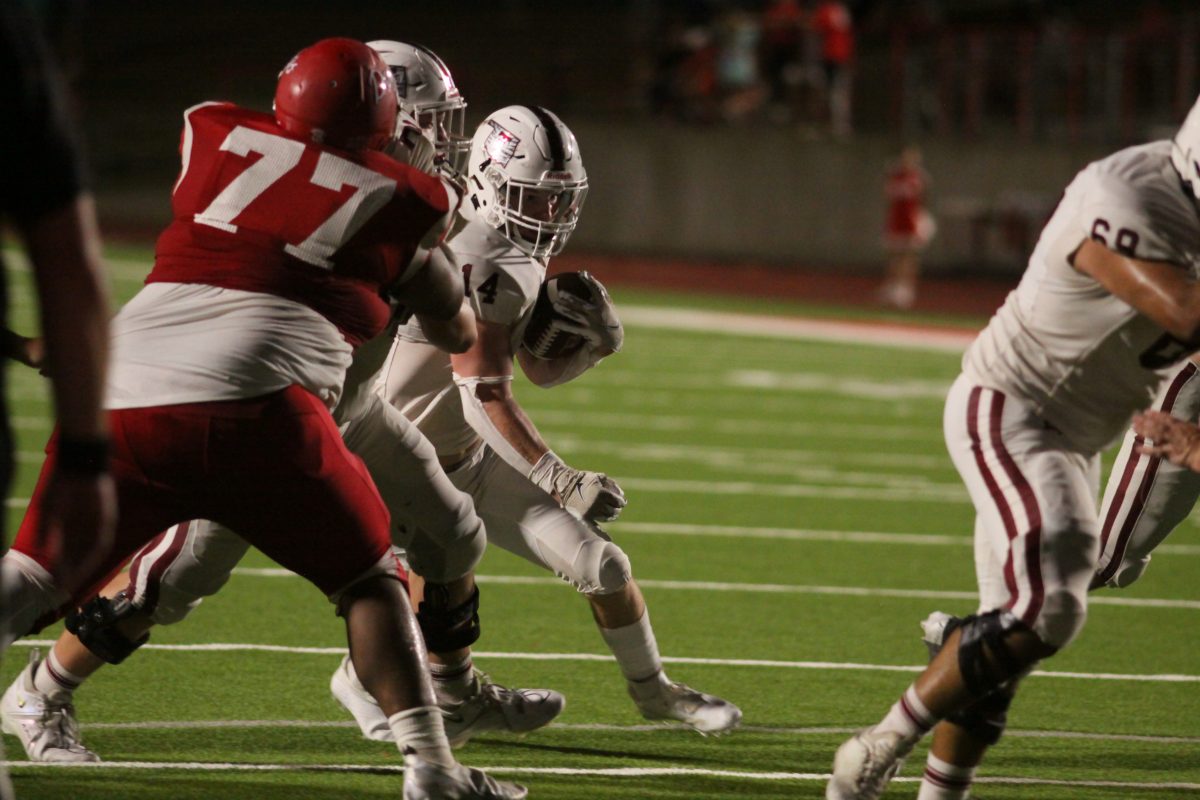 The Bulldogs looked to pass during their first series after getting the ball back, but they were picked off quickly by Tuttle defensive back Major Sharp. McAdoo ran the next touchdown in from 26 yards out with 3:27 left in the second quarter.

Tuttle got the ball back fast and Dennis hit senior wide receiver Weston Grounds for a 69-yard touchdown with 1:41 left in the second quarter.

Up 20-0, Tuttle’s Adrian Avelar shut down the following drive with a big sack, and Cache was forced to punt, which gave Tuttle the chance to run the first-half clock out.

Cache scored the first points of the second half with a 39-yard touchdown pass with 8:30 left in the third quarter.

Dennis took charge on the following drive for Tuttle, connecting with Tuttle junior receiver Noah McDoulett for 16 yards. Dennis then moved the ball into the red zone with his feet, running  for over 15 yards. He then completed his second touchdown pass of the game finding Grounds again, this time for a 13-yard touchdown. With 5:39 left in the third, Tuttle led 26-7. 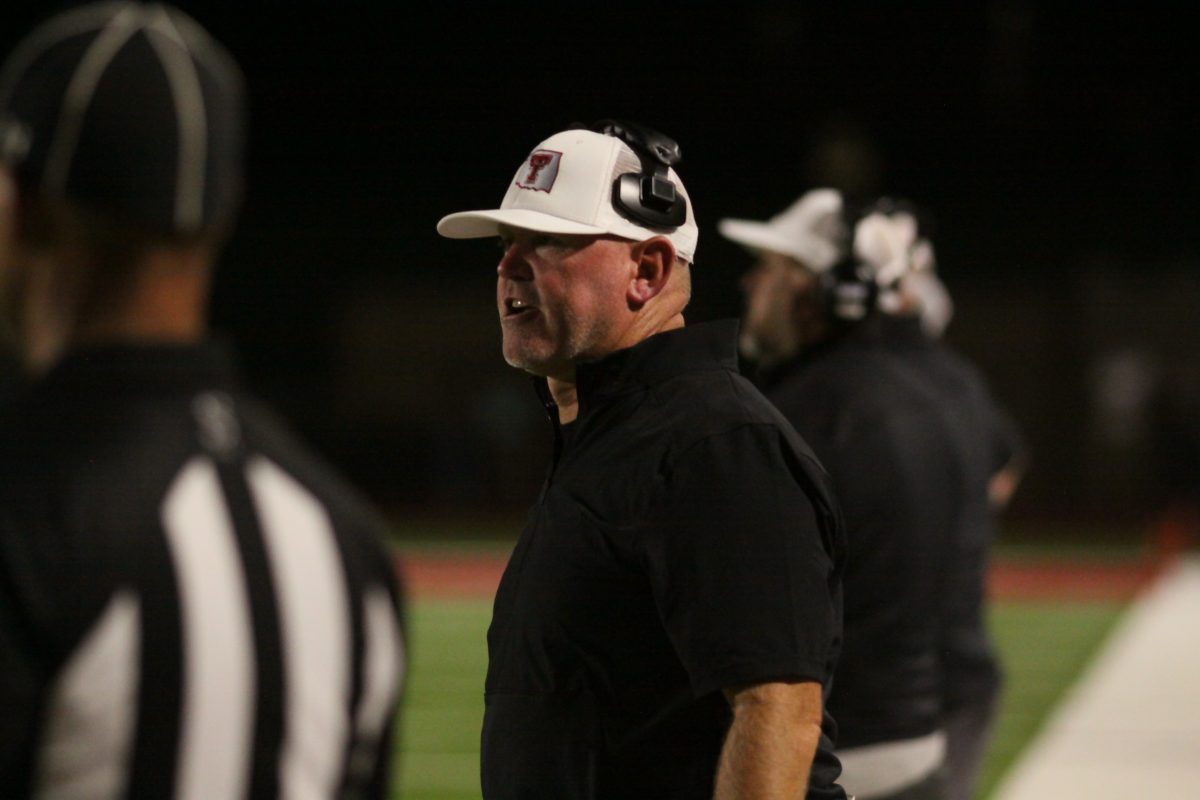 Tuttle finished the third quarter with solid defense and by running Fallwell for multiple big gains, burning out the clock.

Dennis scored the first touchdown in the fourth quarter, a 5-yard passing touchdown to Sharp.

Cache’s only other touchdown came on a 23-yard passing touchdown about halfway through the fourth quarter, but they still trailed 32-14.

Finally, Dennis scored the final touchdown of the game on a one-yard run. 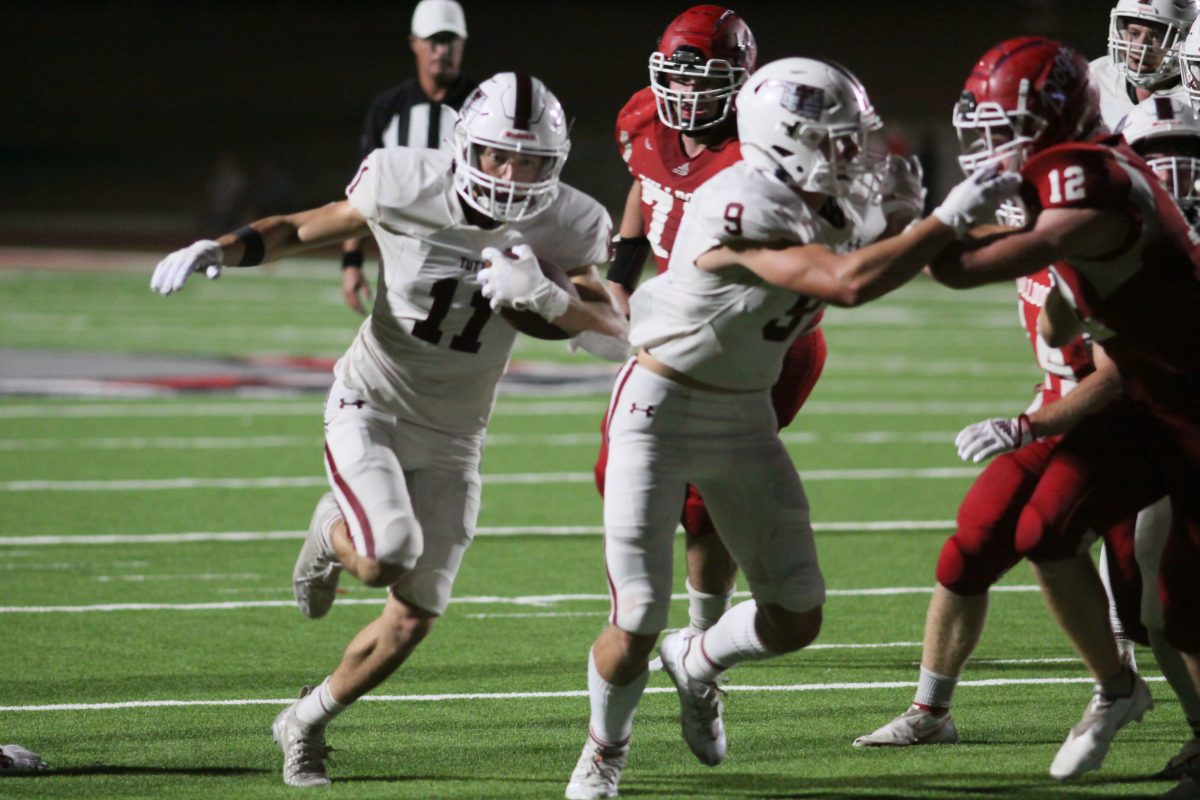 Dennis was 15/26 passing with 197 yards, three touchdowns, and one interception.

McAdoo rushed 17 times, and had 114 yards and two touchdowns.

Grounds had four receptions for 90 yards and two touchdowns.

Douglas had five catches for 77 yards.

The Tigers will have Friday off, thanks to a bye week, and will play their next game at home hosting Noble Friday, September 9 at 7 p.m.

Noble beat 5A Piedmont 12-6 Friday, and will play this Friday at home against Blanchard. 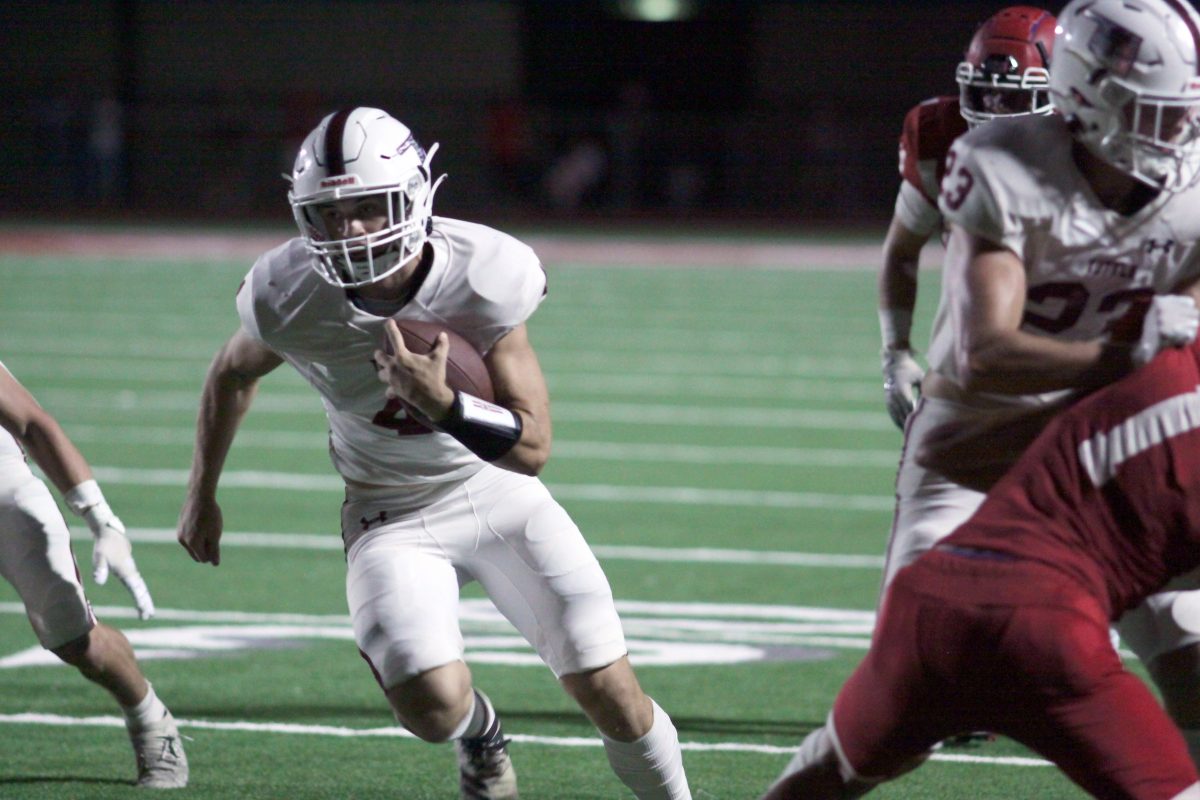