Volleyball ‘sets’ are played to 25 and a team must win by two points to win the set. Whichever team wins three-out-of-five sets wins the ‘match.’ 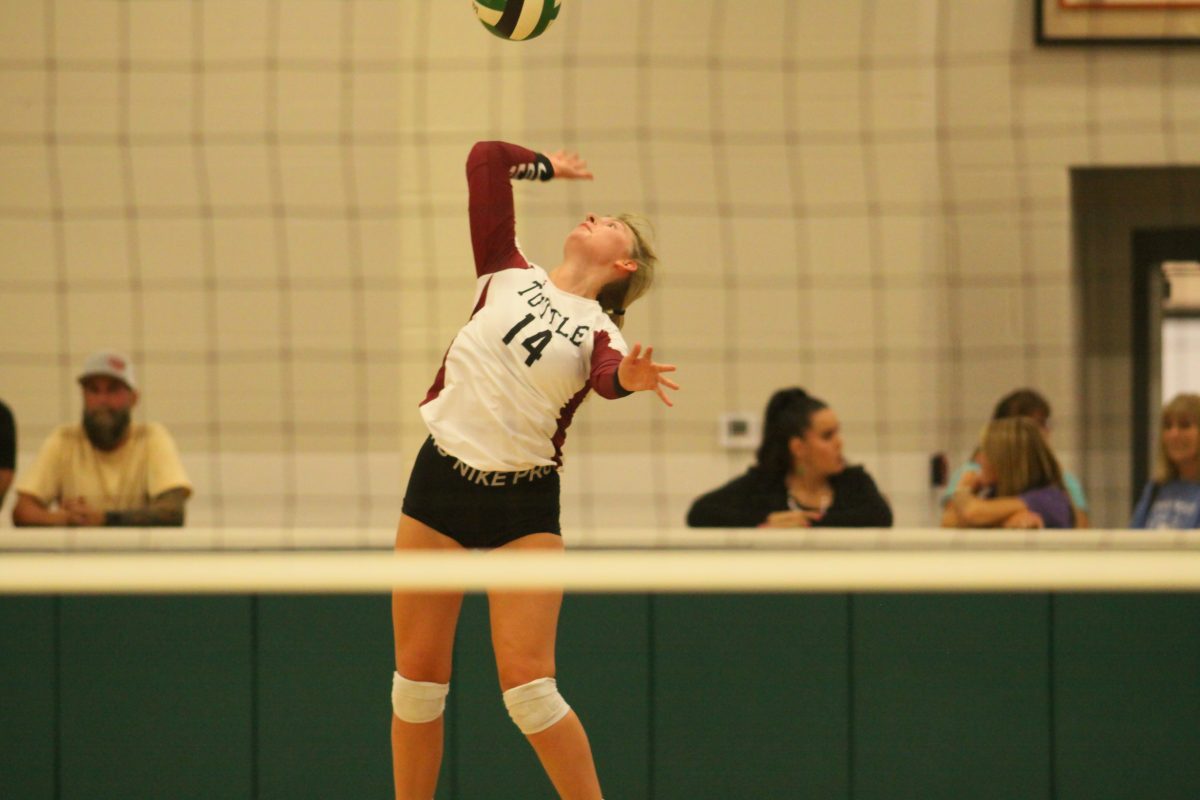 A fifth set, if necessary, would go to 15 points instead of 25. However, a fourth set was not necessary Thursday in Amber, let alone a fifth. 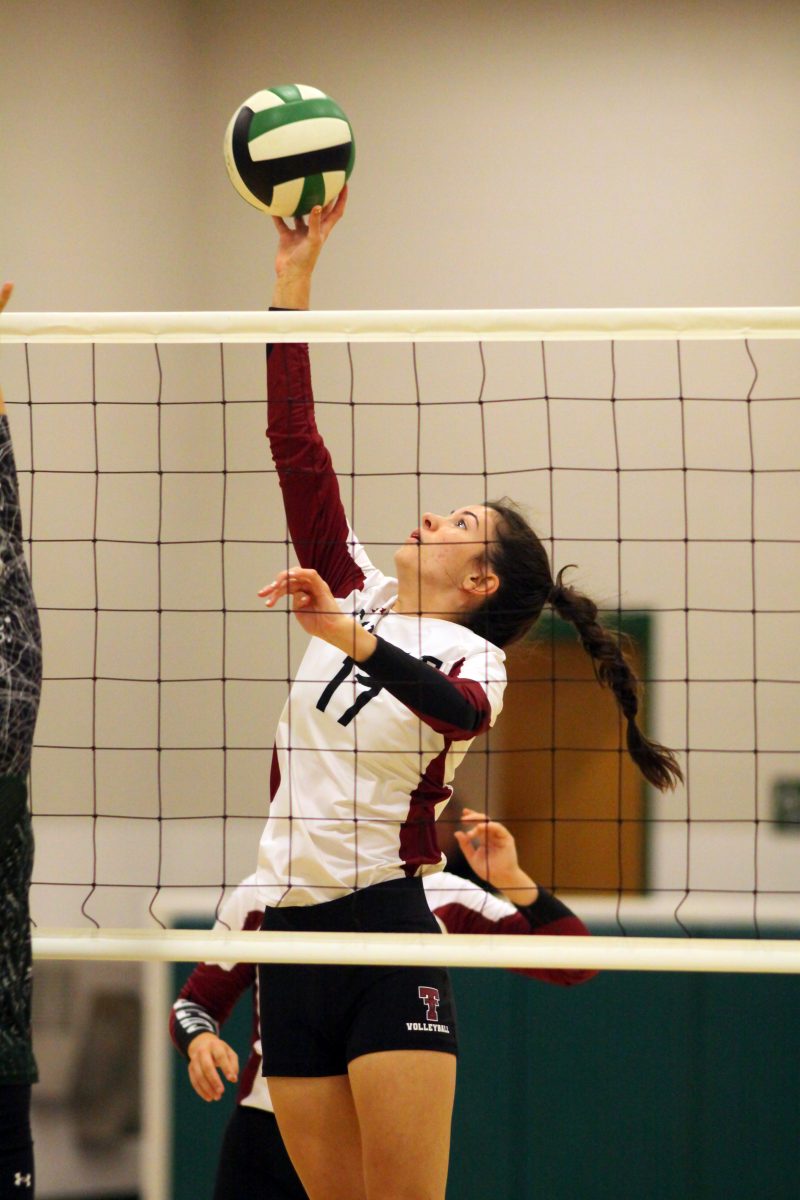 Tuttle won the first set 25-11, but Amber put up an increasingly better performance as the sets went on. 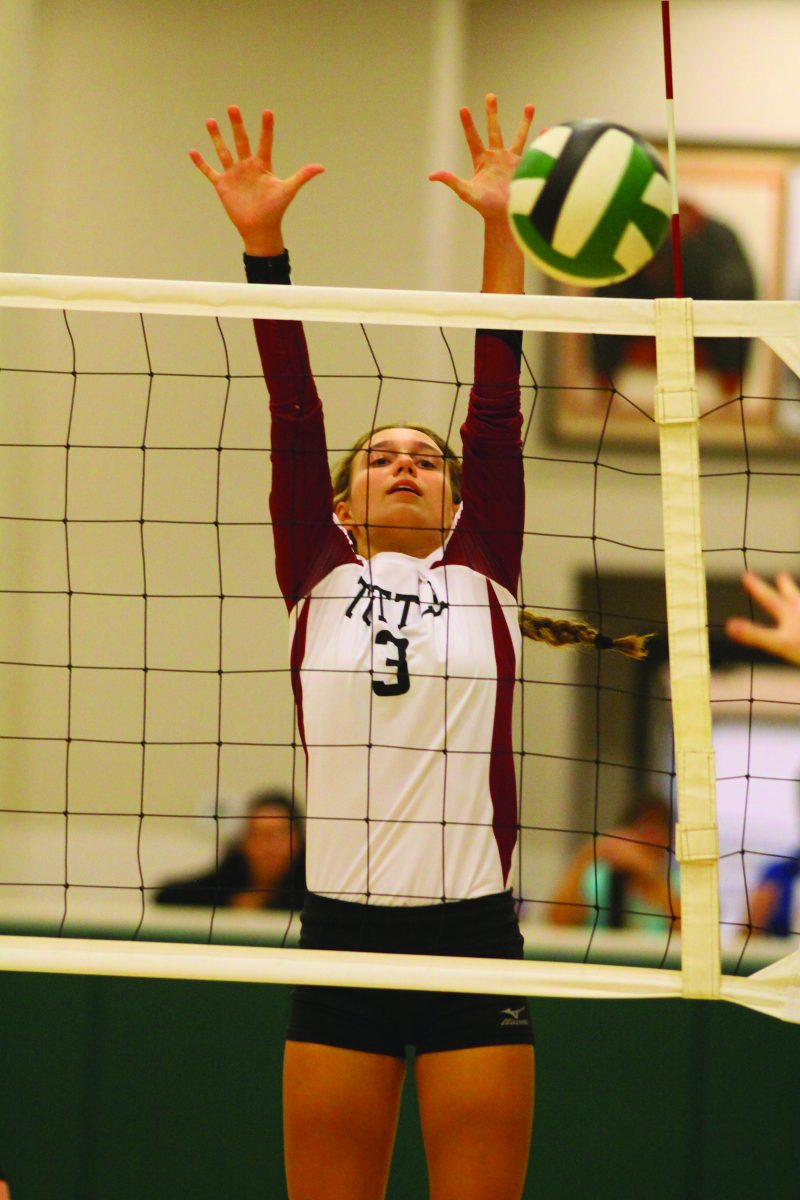 Ampo had a 3-1 lead in the second set when back-to-back hits out of bounds by the Lady Panthers tied it up. Tuttle junior Reese Fallwell had a kill to take the lead. Tuttle senior setter Maranda Overholt sets Fallwell up again on the following play for a spike, but Fallwell finessed it over instead, catching Ampo defenders off guard. Overholt, on the next volley, set up Tuttle junior Darci DeWitt for a score to take a 7-3 lead before Amber answered back. Tuttle got ahead  16-8 when Ampo began to close the gap. Up 23-18, Tuttle’s Paisley Goss had a block to go up 24-18. A serve by Tuttle sophomore Natalie Neasbitt was mishandled by Ampo, winning the second set for Tuttle. Tuttle won the second set 25-18.

Ampo started with a lead again in the third set, scoring three unanswered points. Ampo was up 4-2 when Tuttle junior Hannah Hutchison scored with a spike. Tuttle took its first lead of the game at 6-5. A kill by Goss gave Tuttle a 7-5 lead. Six straight scores by Tuttle put the Lady Tigers ahead 11-5, and Tuttle was up by as much as 21-12 in the third set. 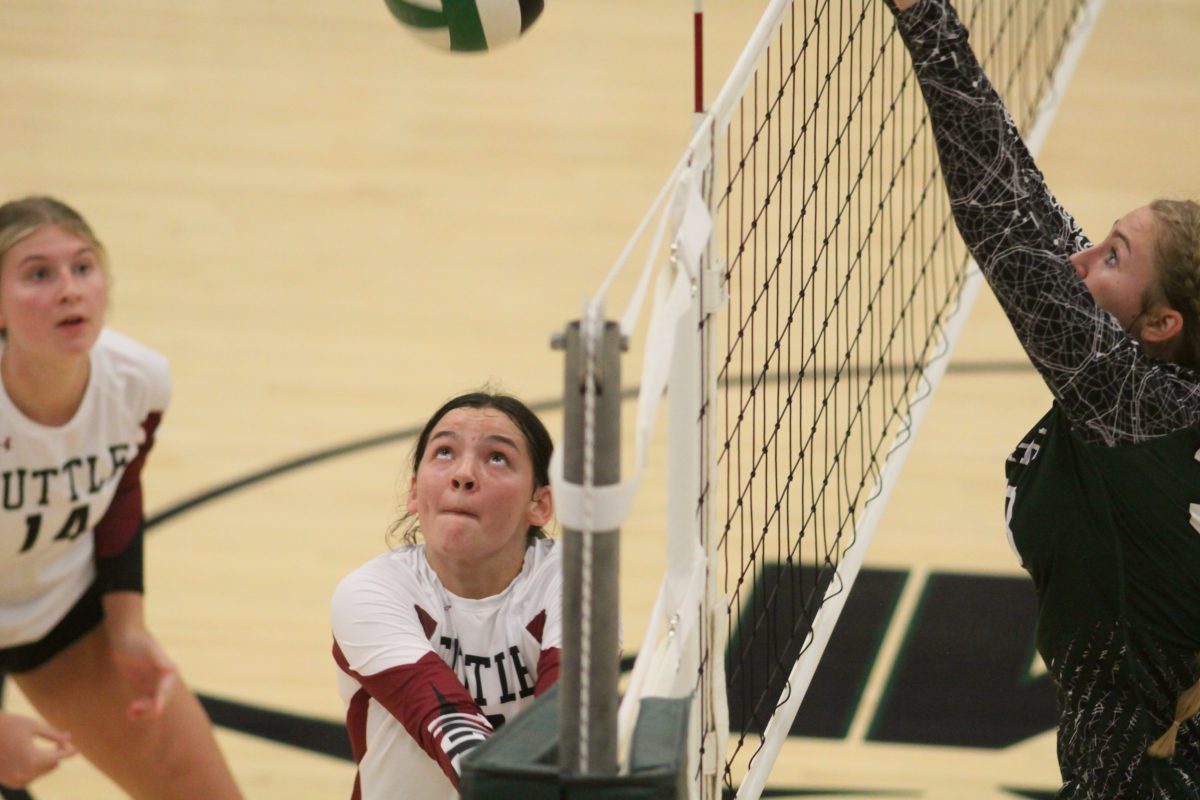 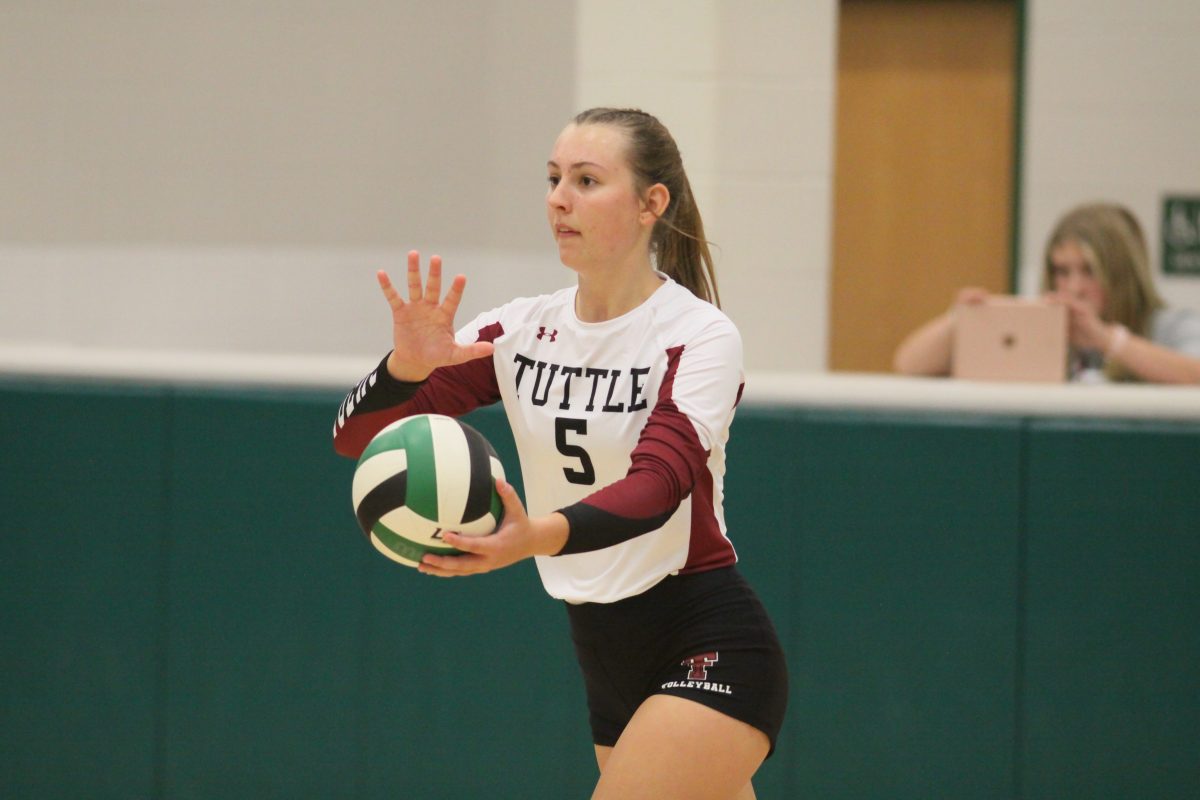 Tuttle’s first-year head volleyball coach Ashley Wood said Ampo’s momentum was, “Very nerve racking. That happens a lot when we play Ampo but usually the girls pull it out in the end, so it comes out good, but Ampo is a good team and they always amp it up towards the end of the game. They’re definitely good competition for us. I like that my girls never gave up. They fight until the end no matter how down they may get in their heads, they stay in the game. Our serving was a little off tonight, and so was our covering, so we will continue to work at getting better at that.” 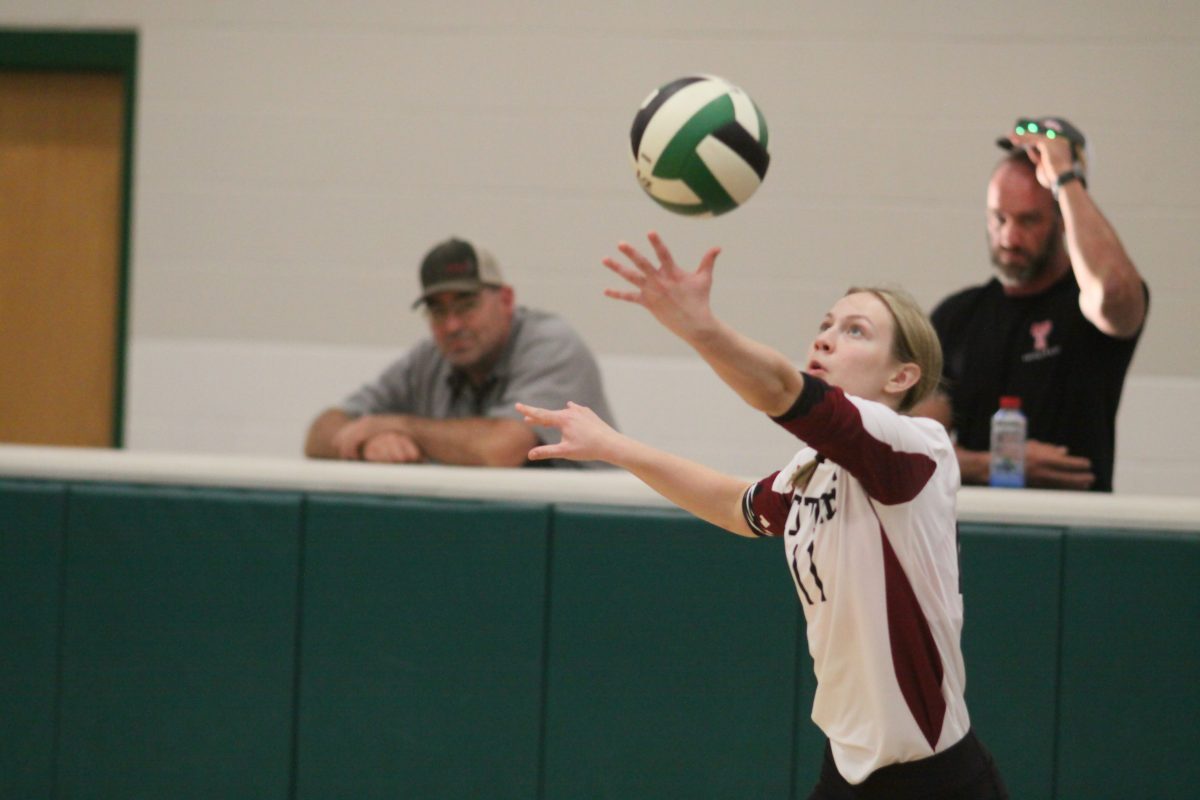 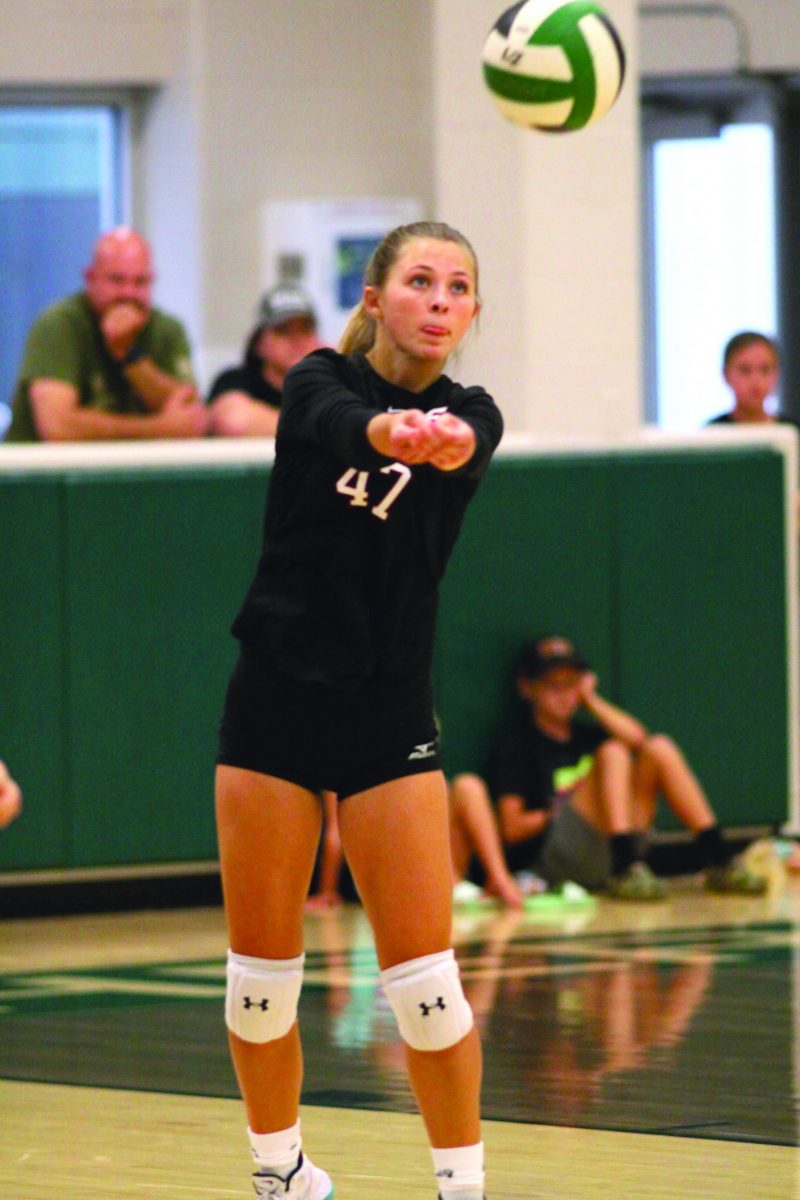 Coach Wood started her coaching career in 2018 at Premier in Norman where she coached club volleyball for two years. Coach Wood and her husband put on their first “Camp Wood” in 2018, which was a beginners clinic they put on for kids ages 8-12.

“We ended up putting on three of those,” the coach said. “The first clinic had 10 kids, and by the third clinic we had over 40 girls. Those were super fun!”

In 2019, Wood assisted on the varsity team at Noble High School for a season under Chrissy Marsee. From 2020-2022, Wood was a Head Coach for Oklahoma Charge. Coach Wood decided not to return to the Charge this coming season, in order to serve the Chaos Volleyball Club, out of Tuttle, as the Director of Coaching and the 16s Head Coach. “I have also coached private lessons, strength training and vertical training for 4 years now. This is my first season with Tuttle Volleyball and I am absolutely loving it! I coach all three teams at the high school with Kristen Finn as my assistant and we have an amazing group of girls

“We started working hard in March when I first came on board, not only physically but mentally, as well as doing many team bonding events and exercises. As a coach, I try to help them not only with their physical game, but also their mental game and building their confidence as a person in general, not just as an athlete. When they are bonded off the court, they will work better together on the court. If they are not only physically strong, but mentally strong and confident in themselves, they can beat any team out there. We have an amazing varsity team this season, and are working hard on developing our freshman and junior varsity teams as well. We are looking forward to the rest of our season and learning from each game to continue our overall growth as a team and as individuals.”