A section of Triple X Road that has been barricaded since 2013, reopened this summer.

District 2 County Commissioner Brian Maughan says the needed repairs, reconstruction of roadway and modification of the river bank was made possible by grant funds from the Federal Emergency Management Agency. 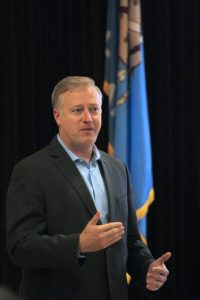 Citizens have been waiting patiently since the road closed when a section of the North Canadian River, alongside Triple X Road and north of NE 36th, shifted during record flooding. The area was then eroding for years as the western bank approached the old roadway and sudden collapse was likely.

After being blocked in 2013, the road was declared permanently closed in 2017.

“This was a safety issue,” Maughan said. “We could not in good conscience endanger motorists traveling that route.”

Now almost a decade later, the road is open.

FEMA funds have allowed for the long-awaited riverbank repair and channel relocation in an effort to allow for the reopening of Triple X Road between NE 36th and NE 50th.

Through the project, the river and part of the road were relocated to ensure the safety of drivers and property owners.
Officials say the river is now where it was in 2010. 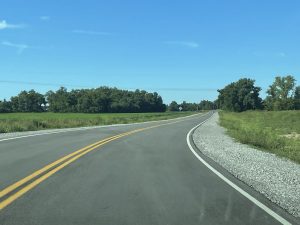 FEMA previously provided $609,750 to study and plan the project.

For the federal requirements to get a FEMA reimbursement for some construction costs, the project, with audits, must have been completed by August 2022.

“First and foremost, I want to say thanks to Senator Lankford for helping us with a federal grant to get Triple X Road reopened. This has been a long slugfest. Triple X Road has been a hard nut to crack. This involved the City of Choctaw, City of Harrah, unincorporated areas of Oklahoma County and also the river, which is under the control of the Army Corps of Engineers. The cost was far beyond what we would have ever been able to afford as a county. He kept fighting for the FEMA grant, and it has finally been reopened. Now we’re having discussions on what to do with the south part of that road that is in bad shape,” said Maughan.

“Some people sued us for trying to reopen that road, and that caused some issues that could have resulted in us losing that grant and the road forever. Fortunately, we prevailed in that litigation and now the road is there. Most importantly for this area we’ve stabilized that area of the river. We’re thankful to all the members of congress that helped us get that done.” 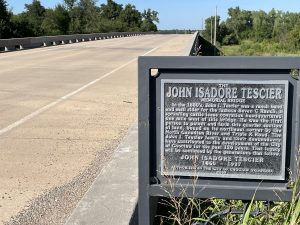 The John Isadore Tescier Memorial Bridge was authorized by the City of Choctaw in 2009, and in 2013 the bridge was closed to through traffic and only accessible from NE 50th. As of this summer, the road and bridge have been reopened. (PHOTO BY RYAN HORTON)

Maughan says the remaining south section of Triple X between NE 23rd could use some repairs as could many other rural county roads.

He says the Oklahoma Turnpike Authority has completed their efforts to restore local roadways damaged from the construction of the Kickapoo Turnpike.

Now, future improvements and repairs will fall upon the limited budgets of local municipalities and the county.

“You’ve been extremely patient in this part of the county in regards to the devastation done to the roads by the construction of the turnpike. I hear you, and appreciate you. We drive around all the time on these roads going to projects, and we’re right there with you getting rattled to death. OTA assured us they’d give us a certain amount to help with the damage done in construction. It turned out to be nowhere near what we needed, but that’s just the way that’s going to be,” said Maughan.

“Most of the funds we got from the OTA are now gone so we’re doing that out of existing budget. We’re getting there, and things are looking better than they did two years ago when they opened the first section of that. We’ll continue to work on that, and your patience is something I value. I understand the frustration of many out here and the growing pains of the region.”