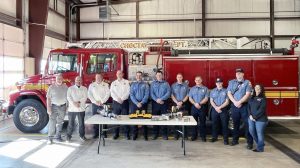 Choctaw Fire Department has new extrication equipment thanks to a grant from Firehouse Subs.

Choctaw City Council approved the acceptance of a Firehouse Subs Safety Foundation grant in the amount of $24,852 in July of 2022.

Officials say those funds were used for battery-powered extrication equipment.

Extrication tools include a variety of cutters, spreaders and rams used to perform rescues in vehicle accidents and small spaces.

Thanks to funding from the Firehouse Subs Safety Foundation Grant, Choctaw’s department now has modern tools.

A new battery-powered cutter and a spreader were on display.

“We actually had a car wreck a week before we got these. These would have really helped us cut those people out of the vehicle quicker,” said Kerry Williams, who applied for the funding on behalf of the Choctaw Fire Department.

Officials say existing hydraulic equipment has a hose limit of about 50 feet, and anything farther than that requires first responders to remove the equipment from the truck, which takes valuable time in the case of an automobile accident requiring extrication.

“A large amount of our equipment has gone to battery powered. Everyone is phasing into that,” said fire chief Loren Bumgarner. “We have a lot of DeWalt equipment in our trucks now, and this really helps us out.”

Firefighters say the new spreader can spread to about 32 inches and they have a tip extension meaning they can open metal to approximately 40 inches.

“Normally, you have to have some kind of ram to get that extension, but with these it’s done with one tool,” said Williams. “It’s run on normal DeWalt batteries you can buy at any hardware store, and we have plenty. It’s all electric so there’s no oil or anything like that. If the battery does die on these, there’s a reserve to get one more full cycle in case you’re in the middle of something.”
Firefighters say the cutter can easily cut through door hinges and anything else they might need to save lives.

“With our budget, we wouldn’t be able to buy this equipment. That’s all there is to it,” said mayor Randy Ross. “So, with the generosity of Firehouse Subs, we can save lives.”
Based out of Jacksonville, Florida, Firehouse Subs has over 1,200 restaurants in 46 states, Puerto Rico and Canada.

The nearest location is on Douglas Boulevard in Midwest City.

“Thank you for all you do,” said franchise owner Coby Jones, who oversees all Firehouse Subs locations in the Oklahoma City metropolitan area. “It’s a scary world out there, and you guys help make it a little safer.” 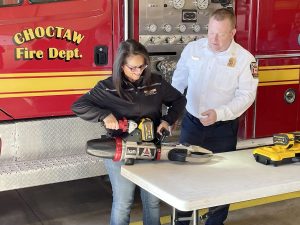 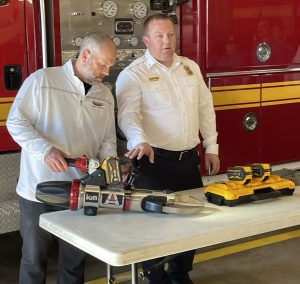