Choctaw High School’s Yellowjackets rallied late Friday to secure a big district win that likely ruined any hopes the Wolverines had of a playoff appearance. 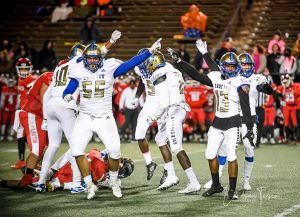 The Yellowjacket defense celebrates as they take control of the ball against Lawton. (Photo by Lindsay Tesio)

On a cold and rainy night in Lawton, Choctaw produced 560 yards of offense by the end of the night to win 41-35.
As impressive as Choctaw’s offense was, it was the hard-hitting physical defense that secured a late come-from-behind victory for the Jackets.
Twice in the fourth quarter, the Wolverines lost fumbles inside the Choctaw 10-yard line.
Choctaw didn’t hesitate and scored the final 21 points of the game to take the road win, 41-35.
After a close two quarters, the Wolverines led 21-14 at the half.
Lawton took a 35-20 lead with just over three minutes left in the third quarter, but the Jackets answered with a two-play drive that cut the Lawton lead to nine.
Lawton continued to run the clock and run the ball up the middle. They were looking to expand their lead again, but Jordan Mukes punched the ball out and CHS took over at their own 5-yard line.
A short time later a 31-yard pass to Deysean Moore added six for Choctaw to cut the deficit.
Lawton came back with a couple big runs to again return to the CHS red zone. However, one play later Angel Ackerman would come up with a fumble recovery near the Jacket end zone with CHS trailing 33-35 with just over six minutes remaining.
Choctaw’s defense had again made crucial stops to allow the explosive Jacket offense to put in some work.
Gabe Johnson took the opportunity to make a big play that put Choctaw in the lead, and Moore slapped on an extra two.
With just over three minutes to play CHS led 41-35.
Then with 1:59 left to play Choctaw forced a turnover on downs securing the district win, 41-35.
Senior QB Thad Williams passed for 356 yards and ran for another 126 in the district win.
Johnson had 205 yards receiving on just nine catches, which was good for four TDs.
Moore had 44 yards receiving including a TD and a two-point play.
Moore had 64 yards rushing, including another two-point conversion, while Johnson put in 14 yards on the run.
Cade Sanford had 43 yards receiving, Chase Jackson had a 33 yard play and RJ Jackson had 31 yards on three catches.
This was the third time ever that Choctaw has defeated the Wolverines with previous victories coming back in 1994 (7-6) and 2016 (52-26).
With the win Choctaw improved to 5-3 overall and 3-2 in district play.
That 3-2 record has CHS tied for third in district standings with rival Midwest City.
The two meet Friday night at Rose Field. Kickoff is set for 7 p.m.