David Reid has been named the next Superintendent of the Choctaw-Nicoma Park School District.
After 48 years in education, Dr. Jim McCharen will retire from his 18-year post at the helm of CNP Schools, effective June 30.
At that time Reid will step up to take on the role of CNP Superintendent. 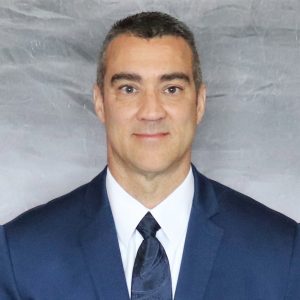 As a graduate of Choctaw High School in 1990, Reid was excited to begin his teaching career in his home district just four years later. He’s been here ever since.
Reid has spent the last 26 years dedicated to the education of Choctaw-Nicoma Park students, and he has served the last three years as Assistant Superintendent for CNP Schools.
“I taught for seven years (4th and 6th grades) at Nicoma Park Intermediate. After this I moved to Nicoma Park Junior High and served as the assistant principal for two years.  I was then promoted into the head principal role where I remained for the next nine years.  During this time CNP moved to the middle school concept and Nicoma Park Junior High transitioned into Nicoma Park Middle School,” explained Reid. “In 2012 I became the principal at Choctaw High School and remained in that capacity for five years.  The past three years I have served as the Assistant Superintendent for Personnel and Technology.”
Reid earned a Bachelor of Science and a Master of Education in Administration from the University of Central Oklahoma.
Spending most of his life close to home has allowed Reid to develop a plethora of connections throughout the community that he believes will allow him to better serve the students and staff of CNP Schools.
“My time in the CNP District, both as a student from kindergarten through high school graduation and 26 years as an educator, has provided unique opportunities to develop effective relationships and work collaboratively with district, civic, religious, and community leaders.  These established relationships will be valuable as I advocate for all issues pertaining to CNP students and schools,” said Reid.
“Choctaw-Nicoma Park Schools are a model of exceptionalism.  This is due primarily to the quality of our current leadership.  I am excited to be the next superintendent because I believe in the established values and direction of the district.  As Assistant Superintendent, I have had the opportunity to work alongside current leadership in bringing us to this point.  I am ready to take the banner from Dr. McCharen and carry it into the future.  In my tenure as the CNP Superintendent, the district will continue to ‘Expect Excellence’ in everything we do.”
Reid is excited to take on the new role. He plans to help continue a tradition of excellence that is already well established in the district.
“This school district is bigger than any one person. It has traditions that stretch back far longer than I’ve been alive. I know there’s a certain standard that I need to live up to, and I plan to do everything I can to staff this district with the right administrators and teachers in order to do just that,” said Reid.
“I am extremely humbled and honored to be selected to be the next Superintendent of Choctaw-Nicoma Park Schools. I’m not here to usher in a new era of CNP success — this is already an elite school district. I’m just lucky enough to have the opportunity — along with the administrators, teachers, support staff, students, parents, and community — to help write the next chapter. Together we will.” 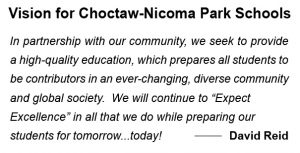 Action was taken by the CNP School Board to make the selection official Tuesday night, May 12. He will officially begin his new duties July 1.
“David Reid brings 26 years of educational experience to the district at all three levels of elementary, middle school and high school with the last 3 years at central admin office overseeing personnel as Assistant Superintendent.  David is one of Choctaw’s very own. He is a graduate of Choctaw HS and he is very vested in the community. The Board of Education is looking forward to David’s leadership and his abilities to bring our teachers, support staff and students together to achieve excellence in the district,” said President of the CNP Board of Education, Daryl Crusoe.