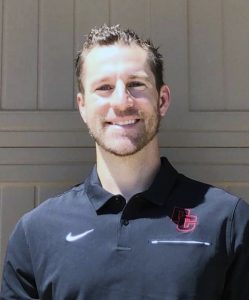 The outfielder helped the Tigers advance to three Class 4A state title appearances, winning the 2006 state title his sophomore season.
Hawk went on to play at Connors State College for a year before transferring to the University of Central Oklahoma in 2010.
He accepted his first teaching and coaching position as an assistant for Panther baseball at Harrah in 2016.
The next year he moved over to Choctaw-Nicoma Park where he has been coaching middle school baseball, softball, football and wrestling ever since.
With a passion for everything the Choctaw program has been working to build in recent years, and much loyalty to district administrators, coaches and athletes the opportunity to accept his first high school head coaching position was tough.
“When the job opened at Choctaw, I pounced on it. It’s been wonderful here. It was a tough decision, but I’ve prayed on it, and I really think this is the best decision for my personal growth right now,” said Hawk. “I actually came to Choctaw through the little league wrestling program. I was coaching that two years before I got my teaching certificate.”
Hawk has become a familiar name in Choctaw athletics in recent years as Corey headed several middle school sports teams, and older brother Shane remains at the helm of the CHS baseball program.
“I’m obviously very loyal to my brother, and also to Benny and Theresa (Coleman) with Choctaw wrestling. Choctaw has been wonderful, and I’m excited for this new opportunity,” said Hawk. “I’ve sent my brother some outstanding athletes over the last three years, and I expect them to be state bound for the next several years at least. To be the best you have to beat the best, and I look forward to having some competitive games against him in the future. Everything we do is out of love, but we’re also both competitive people.”
Hawk says the Eagles should have no concern about his work ethic as he plans to help Del City athletes find success on and off the field.
“Mike Dunn has been bringing in some talented coaches, and really revamping all Del City athletics. I am excited to bring my energy and passion to the long list of great coaches and people that make up the Eagle family,” said Hawk. “I hope to help Del City return to where they were in the late 1990’s and early 2000’s when they were pretty much great at every sport. As far as baseball, we’ll be looking to make a decent run and hopefully a title run soon.”
In addition to coaching high school baseball Hawk will also lead the seventh-grade football team and teach middle school physical education.