Kamryn Zuniga will have to wait for her first official high school golf tournament.

The Carl Albert sophomore was looking forward to making her debut with the Carl Albert Girls Golf Challenge on March 13. But the day before, school was closed due to the novel coronavirus.

Zuniga has had opportunities to compete this summer. 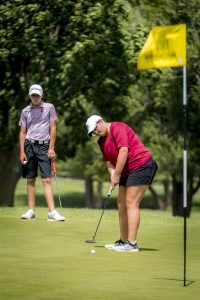 Kamryn Zuniga putts as Preston Albee looks on Saturday during the Hidden Trails Teen Scramble at Hidden Trails Golf Course in Oklahoma City. Zuniga and Albee finished first overall and in the co-ed division with a round of 67. (Photo by Mark Loken)

She placed third at the Girls Team Championship at Oak Tree Country Club on June 15. Zuniga was steady all day, shooting 41 on the front nine and 40 on the back nine. She finished with an 81, just two strokes back of the leader.

“I played pretty well and only had one blowup hole,” she said. “I had never played this course before. I put one in the water but came back and got a double bogey on it.”

“It was fun getting to know the other girls and playing in a tournament,” Zuniga said. “It was a good competition, but we also had a lot of fun.”

The 18-hole tournament included a team champion as well as a stroke play champion.

Zuniga usually competes in the American Junior Golf Association in the summer, but many of the events were canceled this year. This summer, she’s been playing in more tournaments with the South Central PGA.

The first of those was the James E. Stewart Junior Tournament on June 5. The tournament got started late and they played only nine holes. Zuniga finished fourth with a five-over-40.

On June 8, she played in the Shawnee Junior Classic at Shawnee Country Club. Zuniga shot 94 and placed second in her age group and sixth overall. She shot a birdie on the No. 4 hole.

“I didn’t play very well in that tournament,” she said. “That was a hard course and I’ve never played it before.”

Zuniga has one more tournament scheduled in Tulsa on July 13-15 and is on the waiting list for a few others. In addition to the competition, she practices regularly at Choctaw Creek Golf Course. And is looking forward to the high school season.

“I’m really looking forward to playing in high school,” she said. “I didn’t get to play in any tournaments my freshman year, but it was fun getting to know the girls on the team and having fun together.”