Instead of a mask mandate, the Choctaw City Council moved to pass a resolution amendment instructing all businesses in the city to post a notice at their door asking patrons to follow Centers for Disease Control and Prevention guidelines, regarding face coverings, washing hands and social distancing.

The council voted 6-1 in favor of the action, with Ward 1 Councilman Chad Williams voicing the only opposition, despite the public comment portion of the meeting being predominantly residents speaking against any such mandate. 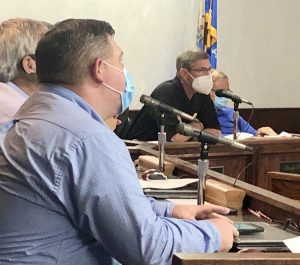 Choctaw City Council discusses an amendment and extension to the city’s State of Emergency requiring businesses to require face masks or place a placard listing CDC guidelines for hand washing, social distancing and wearing face masks at the entry. Ward 1 Councilmen Chad Williams, left, and Mayor Randy Ross, center, were at odds for most of the conversation. The resolution passed, 6-1. (PHOTO BY RYAN HORTON)

Passed July 21, Resolution No. 20-34 amended and extended the city’s declaration of a State of Emergency for the City of Choctaw, until August 31.

The initial discussion was anticipated to focus on requiring masks in all indoor public spaces, much like the recent mandate put in place by Oklahoma City.

However, following much public outcry on both sides of the issue, city officials say the resolution was modified before going before the City Council.

The resolution now calls on businesses within the city limits to require masks or to place a placard near the entry informing patrons of CDC guidelines.

Before voting on the resolution, the council also passed an ordinance (6-1) giving such resolutions more weight for enforcement.

The Ward 1 City Councilman was also the only vote against the passage of the ordinance, and the accompanying emergency clause that put it into effect immediately.

The ordinance amended the health and sanitation section of the Code of Ordinances of the City of Choctaw allowing for penalties to be enforced for violations of council-passed civil emergency resolutions.

“Any person violating the provisions of this chapter or any proclamation or order issued pursuant hereto shall be guilty of an offense, and upon conviction thereof, shall be punished by a fine not exceeding more than one $100, excluding costs,” reads the ordinance.

Williams spent much of the meeting arguing for personal freedom, and voiced his concerns on city government requiring business owners to display a placard.

Williams questioned the effectiveness of a placard to have any effect on the novel coronavirus in Choctaw as he believes the average citizen should already be aware that the CDC encourages hand washing, social distancing and the use of face masks.

Meanwhile, the rest of the council made clear their understanding of their role as public servants was more about promoting public safety than preserving personal freedom.

Ross noted that most officials, local to federal, are encouraging the CDC recommendations on sanitizing, distancing and face masks. He also expressed his dissatisfaction with the safety guidelines being as divisive as they proved to be.

“We’re all trying to do the very best we can. I appreciate the comments that I got both for and against. I had longtime friends for it, and longtime friends against it. Please know that I don’t take this as a personal freedom for me, because where my personal freedom ends, where does yours begin? I appreciate the comments. I do not appreciate vial comments. That’s on both sides of the fence. We all live in Choctaw. We should be for Choctaw,” said Ross.

“I would say that this is only for 30 days. We’re going to see where we’re at. I hope everybody here knows this council is trying to do the very best we can.”

The mayor said he is hopeful the community will choose to make safe decisions, but if they don’t the city may revisit the issue.

“If numbers continue to rise, the council has the authority to call a special meeting and revisit this subject,” said Ross.

At the time of the meeting, Choctaw had 93 reported cases of COVID-19, and of those 75 patients had already recovered and two had died, according to the Oklahoma State Department of Health.

A recent online poll posted by the City of Choctaw showed that 65 percent of those weighing in opposed a mask mandate within the city. According to city officials, the survey ran from July 14 – 20 and had approximately 1,000 respondents.