By a vote of 4-2, Choctaw City Council flip flopped once more on the use of biosolids as fertilizer within the city limits.

The use of sludge, from a wastewater treatment plant, has once again been declared a prohibited nuisance.

During last Tuesday’s regular City Council meeting, officials voted to reverse previous action that allowed the use of Class B biosolids, and returned the code of ordinances to a previous version where only Class A biosolids would be allowed.

The latest action by city officials continues a long-going debate over the use of human solid waste as fertilizer within Choctaw’s municipal boundaries, and sets the stage for possible litigation against the city.

A year ago, Choctaw city officials voted unanimously to amend the code of ordinances, prohibiting the spreading of solid human waste within city limits.

Five months later, officials modified the law, still prohibiting sludge, but allowing for the use of a more refined Class A biosolid fertilizer.

Then June 23 of this year, the City Council voted (7-0) to reauthorize the spreading of solid waste, from waste water treatment plants, in agricultural zoned districts provided that the sludge is not spread within an eighth of a mile of a neighbor’s residential structure.

Before the latest vote, many citizens in support of a full ban on the use of sludge returned to once again voice their concerns about public health as well as complain regarding smells and flies around areas of biosolid application.

Among those in attendance to oppose the ordinance was an attorney representing a local farming family.

That attorney warned city officials that passing the ordinance would not only negatively affect the livelihood of his clients and others, but he believes the action would be illegal.

“I represent them as a lawyer, but I’m here as their friend as well as a friend to the City of Choctaw. There is an Oklahoma law that says no city or subdivision shall pass an ordinance that governs the application of fertilizer. It is illegal for a city to do that, and if they do, that ordinance is null and void,” said George Corbin. “I respectfully ask you not to do that, and if you do this, it will be illegal.”

He argued that a remedy for the dispute over the federally regulated biosolids program should be found at the Department of Agriculture, and not at Choctaw City Hall.

Corbin pleaded with the council to postpone the vote in order to find a compromise that would avoid possible litigation, but the majority of Choctaw’s officials showed no interest in tabling the agenda item.

The city’s legal counsel took the position that biosolids, used to fertilize farm land, does not fall under the legal definition of fertilizer under the existing state act.

“The Oklahoma Fertilizer Act regulates fertilizer in the state, and goes further preventing any city from regulating fertilizer,” said city attorney Ray Vincent. “It is my opinion, Class B solid wastes are not fertilizers as defined by the act. So my opinion is this act does not prohibit the City of Choctaw from regulating the spreading of biosolids from municipal waste water treatment plants.” 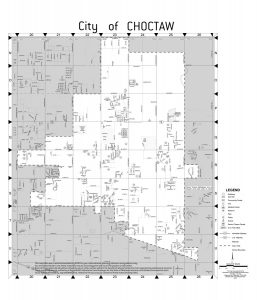 Choctaw outlaws use of solid human waste as fertilizer