Choctaw High School made history Friday night when they claimed the school’s first win over an Arkansas football opponent. 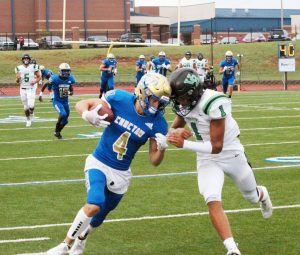 “What always saves us is our effort. Our kids play extremely hard and don’t give up. A lot of people picked them to play in the Arkansas 6A Championship. They’re a tough opponent,” said head coach Jake Corbin. “Anytime you get a quality win like that, as sloppy as it was, we’ll take it.”

The victory in the home opener was bittersweet for Choctaw as injuries are stacking up on the team that is rapidly trying to play catch-up after missing valuable field time due to quarantine.

“The sloppiest win I’ve ever had in 15 years of coaching. I thought defense played lights out. Offensively, it was tough getting a whole lot going with missed executions and penalties,” said Corbin.

“Last week we looked like a team that hadn’t practiced, because we hadn’t after a week of quarantine. We literally got them out of quarantine the moment we played. We didn’t even have time for a walk through. Now we look like a game one team in game two. Last week was like scrimmage two for us, and this was like game one for us in a normal year. I wouldn’t feel as bad if this was game one, but unfortunately for us this is game two and we have a lot of stuff to clean up in a hurry.”

After missing a scrimmage and week of practice, due to restrictions put in place to prevent the spread of COVID-19, Choctaw kicked the season off with a 46-18 season-opening loss to traditional Arkansas power Springdale.

In addition to the loss, Choctaw lost TCU commit WR Chase Jackson with a knee injury that will keep him out the remainder of the season.

Choctaw sustained additional injuries during the win over Van Buren. 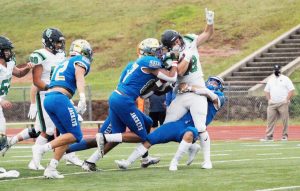 The Yellowjackets knew missing field time had them at a disadvantage going against some of Arkansas’ top-tier programs, and with a dominant game two showing Choctaw got some redemption they hope can be used as momentum moving forward.

The Jackets handed Van Buren, a team that beat Choctaw’s game one opponent by 20 points, their first loss of the year.

The Pointers were on a two-game win streak after opening with a 48-28 win over Springdale and securing a 35-0 shutout over Alma.

After a defensive first half, Choctaw scored first and Van Buren quickly answered within the final two minutes before the break. Choctaw was up 8-7 at halftime and expanded the lead to 14-7 after three. In the final 12 minutes of play, Choctaw would outscore the Pointers 14-3 to secure a historic 28-10 victory for the CHS program.

The Jackets put in 153 passing yards, and another 195 rushing.

RJ Jackson led receiving with 51 yards, while Jax Burchett had 49. Each had a touchdown.

Wasel had 77 yards rushing including two touchdowns. Daymon Jackson added another TD and 53 yards rushing. La’Trell Ray put in 33 yards for the Jackets, CJ Smith had 26 yards and Cale Walden had six.

The Jackets will be working on executing more efficiently in preparation for next week.

Choctaw suffered five fumbles and one interception on the night.

However, the Jacket defense was relentless and continuously made big plays allowing CHS to overcome errors and roll to victory.

The last time CHS faced out-of-state competition was in 1973 when the Jackets beat Liberal and Garden City teams out of Kansas.

Now, the 2020 Jackets are set to be the first Choctaw team to face three out-of-state opponents.

CHS faces their third Arkansas challenger of the year on the road Friday.

“We’ve got a really good Greenwood team coming up, and we start district play after that,” said Corbin.

That district schedule will be a challenge as Choctaw moved east this year and will be fighting for a playoff spot with Tulsa Washington, Ponca City, Bixby, Muskogee, Sand Springs, Putnam West and Bartlesville. 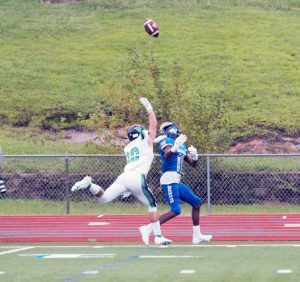