The Jones Longhorns showed no ill effects from an unexpected week’s layoff as junior Carson May passed and ran through neighboring Luther Friday night for a 40-16 triumph to set up another shot at Lincoln Christian. 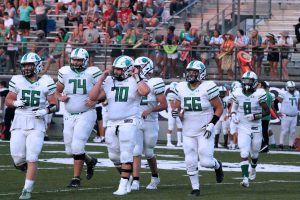 Longhorns take the field during a recent game. (PHOTO BY RYAN HORTON)

The defending state 3A champion Bulldogs were set to host Jones two weeks ago but the COVID-19 reared its ugly head and the game was postponed. Almost miraculously, both teams had a bye week coming up and the game was rescheduled for Friday night in Tulsa.

The Bulldogs have handed Jones its only regular season defeat the past two seasons and currently have a 15-game winning streak after an undefeated run to the OSSAA Class 3A championship and a season opening 36-8 whipping of Beggs.

May had a nice and easy warmup for the big game, both by land and by air as he accounted for five touchdowns.

After a slow first half, May connected on 14 of 23 for 321 yards, including two to Player of the Game Trey Dorrell and another to freshman sensation Brayden Scott. On the ground, May rang up the

Luther defense for another 140 yards and two more touchdowns.

He was an easy Offensive Player of the Game selection. William Irvine, who was a thorn in the side of the Lions on both sides of the ball, kickoffs, punts and every place the football happened to be, was Special Teams Player of the Game.

The Longhorns were a bit sluggish in the first half and even yielded a weird two-point safety that resulted from a pass intercepted in the end zone. The two teams went to the locker room with Jones on top, 14-2.

But May was just getting warmed up as he connected on eight straight passes to open the second half and rang up a whopping 185 yards and three touchdowns, two of those to Dorrell for 39 and 29 yard TDs.

Scott came up with his first varsity TD on a 21-yard toss that pushed the advantage to 34-8 after Luther’s QB Drew Scheer got his team on the board.

After Cox found the end zone for the Longhorns’ last tally, Owen Wilson kept his legendary Luther family name in the spotlight with a TD pass from Scheer for the final tally.

Dorrell, Elijah Reed, Xavier Zackery and Emmet Murphy each had three receptions from May while Tucker added one for 14 and Cox pulled down a 12-yarder.

Irvine led all tacklers with 11 and shared a tackle for loss with Kameron Estrada. Cox had 10, Carter Cranford and Braiden Martin each had 7 and Tucker had 5 including a sack and a vicious tackle that forced a fumble recovered by Tj Thomason.

Martin, Dorrell and Kameron Sweat all had interceptions as Jones limited the visitors from up the Hogback Road to just 179 yards of offense.