The Harrah Panthers defeated both Bridge Creek and the Corona virus Friday night at Evans Field to hand Chris Bliek his first career victory as a head coach.

Quarterback Nolan Boone introduced fans to the Boone Dozer, Ricky Bliek proved that heart is more important than size and Colton McElwee finally has his first career touchdown as a Panther as

Harrah’s defense slammed the door on the Bobcats and preserved a 12-0 victory for the Panthers. 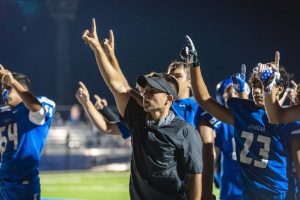 The Panthers were without 12 members of their squad, several vital parts of the Panther puzzle, who were quarantined after being exposed to Seminole players who tested positive when the two teams met last Friday.

To honor their missing comrades, the Panthers painted the jersey numbers of the missing players on their helmets.

The 14-day quarantine extends through Friday which would make the Dandy Dozen ineligible for Friday night’s non-district clash with McLoud, but as of press time, the Redskins were considering pushing the game back to Saturday so the quarantined Panthers could play.

This would be an act of kindness and compassion that should remove any figment of bad blood between the long-time neighboring rivals.

The Bridge Creek game was 0-0 at halftime although both teams had put touchdowns on the board that were wiped out by penalties.

The Panthers forced a punt on BC’s first possession but fumbled it right back giving the Bobcats excellent field position. The visitors scored in four plays but a holding call negated the TD and the

Panthers held on fourth down and took over at the 5.

With No. 1 running back Nick Moore quarantined, Bliek, Chadlee Humphreys and Michael Yarbrough bridged the gap by committee with Boone turning into a Superman to operate the crowd-pleasing Boone Dozer version of the Wildcat formation.

The Panthers took possession at their own 45 just before halftime and Bliek ignited an impressive drive with a 10-yard blast, nine more from Yarbrough, a couple of blasts from the Boone Dozer, 8 more from Bliek then an apparent touchdown pass to McElwee, but his celebration and that of the entire Panther Nation was cut short by the dreaded yellow flag which wiped it off the board and sent the teams to the locker room at halftime, knotted 0-0.

Midway through the third period, Boone and his Boys came to the line of scrimmage and looked at the goal line, 62 yards away. But two big runs by Bliek, a 27-yard pass to McElwee and 28 yards by Yarbrough and Bliek and suddenly, the Panthers had first and 10 from the 16- yard line.

That made it Boone Time. The junior QB took the snap and gained 7 to the 9 then 7 more for a first and goal from the 2. Next play, TOUCHDOWN!

But the Panthers were just getting warmed up.

On the first play following the kickoff, Anthony Portuguese delivered a hit on the BC runner and Mort Barber pounced on the loose ball to give Harrah possession and set up the clinching TD drive.

Boone found McElwee again for 26 big yards, Yarbrough added 11 more, Bliek tossed in 12 in two cracks at the Bobcat forward wall and that brough the ball to the 10. On first and goal, Boone faked a Boone Dozer keeper, raised up and connected with McElwee once again for the 10-yard TD and this time, the talented senior could celebrate along with the entire Panther Nation on their home field before their own crowd for Bliek and his Boys.

McLoud is enjoying 6-2, 185 senior quarterback Collin Gibson, who moved over from Little Axe. He has more than 200 yards passing and 200 more running in the Redskins’ 38-6 win over US

Sophomore running back Clint Campbell is also an offensive threat while Heston Zimmerman and Tryce Lewis anchor the forward all on both offense and defense, where Wes Olds and Karson Cue hold down the defensive backfield slots.

The Senior Night recognition for Harrah football players was postponed to a later date because several of the seniors were in quarantine from the COVID-19 virus following the game at Seminole.

(Shelly Cantrell contributed to this story)

For more photos from the game, by Jason Turner,  visit SMUDGE.PHOTO 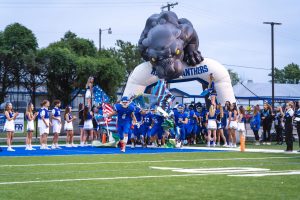 The Panthers take the field against Bridge Creek. (PHOTO BY JASON TURNER)