Choctaw was in another defensive battle with an Arkansas powerhouse when they traveled to Smith-Robinson Stadium in Greenwood to challenge that state’s top-ranked 6A team Friday night.

The Yellowjackets shined on defense again, but struggled to execute on key plays that could have made the difference as the hosting Bulldogs remained undefeated with a 23-12 win.

Choctaw looked to open strong as sophomore quarterback Steele Wasel made an early 80-yard dash to the end zone, but it was overturned by one of many flags that would slow Choctaw momentum on the night. 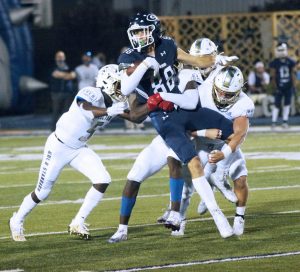 Greenwood turned an interception by Colt Owenby at the CHS 45 into the only score of the first half with a five-play drive for six.

Greenwood took a 7-0 lead with 2:35 remaining and held it until the break.

Choctaw looked to score before halftime as they moved within the Greenwood 5-yard line, but the Jackets were stopped on fourth and one from the 4-yard line.

Choctaw’s hard-hitting defense repeatedly stymied Greenwood drives including an interception by Chris Parker in the Greenwood end zone in the third.

However, he was tackled at the 1-yard line and on the next play running back Daymon Jackson was caught in the end zone for a safety.

Momentum went back to the Bulldogs, and with 8:40 left in the third quarter they had a 16-0 lead.

Choctaw answered on the next possession.

La’Trell Ray put in some big runs, and then Wasel connected with Jax Burchett who outworked Greenwood for a 56-yard run that earned the first touchdown on unbeaten Greenwood this year.

The Bulldogs would score again before Wasel made another huge run for the end zone, and this time there were no flags. Wasel dashed 77-yards to make it a 23-12 contest.

On the night, Choctaw outrushed Greenwood 218 yards to 125.

Ray had 90 yards rushing, while Daymon Jackson had 15 yards. 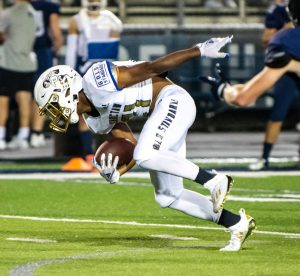 “I’m really proud of our defense. They played absolutely lights out against a really good offense,” said head coach Jake Corbin.
“We’re super young, and it shows. Depending on the lineup on offense, we might have one senior and six sophomores and it shows. We struggle on offense right now, and against really good teams that’ll get you beat.”

Many of Choctaw’s passes that were ruled incomplete could have been game changers. 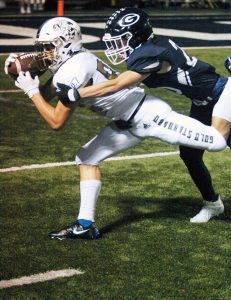 The Jackets can’t catch a break as sophomore Jax Smith makes a big reception, near the sideline in Bulldog territory, that the officials call “no good.” With the incomplete ruling, Choctaw’s drive and momentum suffers a critical blow. (PHOTO BY RYAN HORTON)

The Jackets’ offense finished the night with a fumble and an interception, while 17 penalties cost them 92 yards.

Despite taking the loss to Arkansas’ No. 1-ranked 6A team, Choctaw gained some needed experience.

“Our plan was to improve on penalties and execute better. In a lot of ways, we did that,” said Corbin.
“Everyone wants a win, but ultimately we have to get better every week and be ready for week 11 when the playoffs come. I feel like we did that this week.”

The Jackets were the first team to find the end zone on Greenwood as they’d only given up one field goal in their first two blowouts.

Choctaw’s team made history as the school’s first lineup to compete with three out-of-state opponents in a season as the Jackets went 1-2 against northwest Arkansas teams.

Choctaw now looks toward district play as they open on the road vs. Booker T. Washington (2-1) Friday.

Choctaw is 0-4 against the Hornets, and looks to change that Friday night.

“We’ll take the improvement, but we want a win,” said Corbin. “We have to get better in a hurry and be ready for district. We’re playing a really good team, and that’s on purpose.” 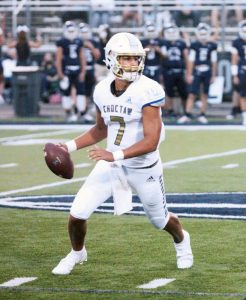 For more photos see our GALLERY