The Yellowjackets are making history on their quest for gold.

The win moved Choctaw to 1-0 in district play, and also 1-0 against instate competition after the Jackets made history opening the year against three of the best football teams in northwest Arkansas. 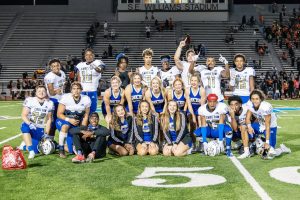 This was the first time Choctaw has defeated the Hornets, and they did it soundly in Tulsa.

This season’s opening is the latest installment of history being made for the CHS football program, but surely won’t be the last as head coach Jake Corbin and company have big plans for the Yellowjackets.

This is Corbin’s fourth season at the helm, and last year he led the Jackets to their first postseason win since 1981. That win setup the school’s first state semifinals appearance since 1965.

After opening his first season with three straight wins, a feat not accomplished by CHS since 1982, Corbin hasn’t taken his eye off the mission of building the entire community around the high school and making Choctaw the “GOLD Standard” in Oklahoma high school football.

The Jackets have been setting a new standard for the program each season, and with the opening of his fourth district schedule Corbin has tied his predecessor Todd Dilbeck as the third most winningest coach in school history.

Dilbeck was credited with breathing new life into the CHS program that had suffered as one of the smallest schools of the state’s large class for decades. Dilbeck led the Jackets to a 20-22 record from 2013-16.

The win over Booker T. put Corbin’s record with the Jackets at 20-16. 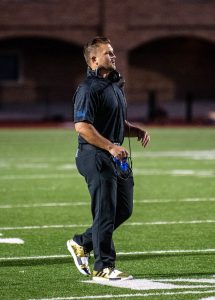 Corbin and the Jackets are excited to return home this week after some grueling road games.

“We just plan to go 1-0 every week, and hope to be 2-0 after Homecoming,” said Corbin. “We’re excited to be home, and have been logging too many miles down the interstate.” 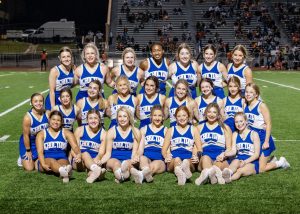 Choctaw SPIRIT squad members take time to celebrate after cheering the Jackets to a win at Booker T. Washington. (PHOTO BY LINDSAY TESIO)