Choctaw High School celebrated Homecoming 2020 with a move to 2-0 in district play.

With a 50-yard bomb from Steele Wasel to Jax Burchett, Choctaw scored on Ponca City with 9:36 left in the first quarter.

The drive went 61 yards in two plays after the Wildcats fumbled a punt return to put the Jackets up 6-0.

After what would have been a 73-yard touchdown pass to Terrill Davis came back on a flag, Choctaw gave the ball up on downs after failing on a fourth and five attempt from their own 30-yard line. 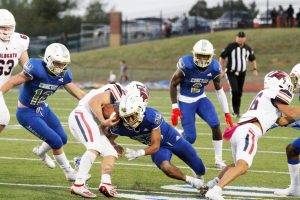 Choctaw’s defense put in work, but six plays later Ponca City had advanced those 30 yards to take the lead on a score by Blake Bristow, 7-6.

With just under 10 minutes until halftime Ponca City extended their lead when Nate Harbeson connected with Sam McKinney on a 24-yard touchdown pass.

Choctaw’s Jax Smith and La’Ttrell Ray put in work helping CHS go 78 yards in nine plays setting up Wasel for a 1-yard sneak for six. Choctaw trailed Ponca City 12-14 with 6:29 until the break.

Choctaw finally recaptured the lead with 43 seconds until halftime, and that would be the final score of the evening.

A pass from Wasel to Davis setup a first and goal with a minute to go, and the sophomore QB got six on the keeper. Davis added the two-point conversion, and CHS was up 20-14. The drive went 77 yards on six plays, and CHS had a solid advantage after one half of play.

With injuries stacking up, Choctaw’s young offense will be growing each week, and the second half had plenty of lessons in store for the Jackets.

In the second half, Choctaw’s young offense suffered some minor stumbles at the hands of and effective Wildcat secondary.

Ponca killed three consecutive Jacket drives with interceptions. Tyson Dewberry had two picks, his fourth and fifth of the season, and Devin Zimmerschied came up with another.

Despite the setbacks, Choctaw’s offense kept their composure and managed to control the final minutes of play.

The Wildcats had a shot as they got the ball with 31 seconds of play remaining, but this time it was Choctaw with a big pick as Jordan Thompson made the snag for a Choctaw win, 20-14. 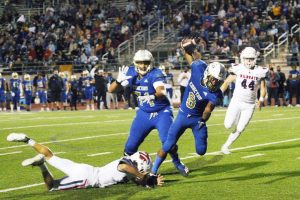 “My hat’s off to Ponca City. They played really well. I think they outplayed us tonight in a lot of areas,” said head coach Jake Corbin. “Luckily, we found a way to get it done.”

Choctaw remained undefeated in their new district, while improving to 3-2 overall.

“We really didn’t play very well. We need to watch film and figure out why. A win is a win so we’ll take it, but we have to figure out a way to keep improving,” said Corbin. “A win in district is huge, and we’re 2-0 so I’m proud of our kids for finding a way to win. Jordan Thompson came up with a huge pick at the end to seal it.”

In addition to trouncing the Titans, Bixby has claimed big wins over Jenks, Union and Bartlesville this year. 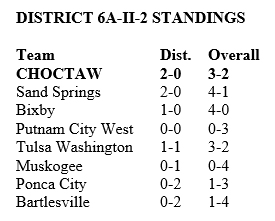 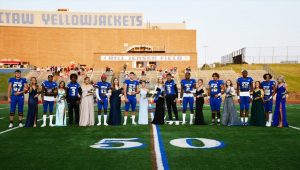 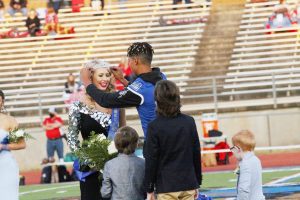