The release found that Epic sends about one in four taxpayer dollars it receives, as a public school, to its co-founders’ for-profit company.

The first release of what is expected to be a two-part report came last week documenting suspect accounting practices of Epic Charter Schools.

In all, $125.2 million of the $458 million allocated to Epic Charter Schools for educating students the past six years went to Epic Youth Services, according to State Auditor and Inspector Cindy Byrd.

Additionally, Byrd found that Epic exceeded a 5 percent state cap on administrative overhead costs intended to ensure schools direct most resources on students, and the state Education Department held the school accountable only once. That resulting in the school repaying just over $500,000 last year.

That number should be much higher, officials say.

“I have seen a lot of fraud in my 23 years, and this situation is deeply concerning,” said Byrd.
“By our calculations, Epic owes the State of Oklahoma $8.9 million.” 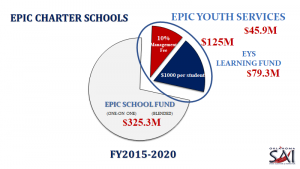 The state report shows that more than $125 million of student educational funds were transferred into a for-profit management company – with no transparency and no accountability.

Gov. Kevin Stitt called for the forensic audit of Epic and its related entities in July 2019 after local District 17 State Senator Ron Sharp wrote a series of editorials questioning the school.

The school’s financial dealings were also being investigated by state and federal law enforcement.

Epic sued the legislator for his questioning of the use of public money. They lost.

“My reputation and legislative career have been destroyed by what has now become Oklahoma’s largest school district because I brought their fraudulent activities to light. Their attempt to stop my inquiries and silence my criticism has not been successful,” said Sharp.

“I’ve been accused of being against charter schools but I’m not.  I dedicated 40 years of my life in the classroom and I know that not all children learn the same so having a virtual option is sometimes what’s best for the child.  What I’m against is entities who fraudulently use tax dollars to financially benefit themselves with no concern how it hurts others.  Epic Charter Schools has taken millions in much-needed funds away from other public schools who are following state guidelines and law, and I’m glad that they are finally being held accountable.”

Epic didn’t only lawyer up against Sharp.

Byrd reported she faced unprecedented challenges totaling 50 subpoenas instead of an expected two or three interviews.

“From this thorough and exhaustive investigative audit, I remain concerned that the money is NOT getting to the students. The lack of cooperation and the roadblocks encountered was unprecedented in the experience of the State Auditor’s office,” reported Byrd. “This is your money and you deserve accountability.”

Sharp was not surprised by the findings of the audit, and applauds officials for efforts to find truth and transparency.

“I’m not surprised with the findings of the audit of Epic Charter Schools as I’ve been trying to point out their illegal use of state funds for years with no avail.  I commend Gov. Stitt for having the courage to call for this special audit and State Auditor Cindy Byrd for providing oversight and accountability of this unfortunate situation.  Past leaders refused to listen to or acknowledge what I was trying to tell them. Not surprising, besides the millions of taxpayer dollars wasted by Epic on advertising, they also pay for a strong lobbying presence at the Oklahoma Capitol.  I hope with this information, the OSBI and FBI can conclude their investigations quickly. The Oklahoma families who have put their faith in this school system need reassurance that their children are getting a proper education and not just being used in an illegal scheme to make the owners rich,” said Sharp.

“Even after receiving the largest portion of state funds, our public-school system has struggled financially in the last decade. I am disgusted that the owners of Epic would knowingly use the public education of Oklahoma’s children to grow their personal wealth while other public schools don’t have the funds to hire additional teachers, buy more books or take care of other classroom needs. As a public official and retired educator, I have been a strong advocate of fiscal transparency and accountability, especially when it comes to our public schools and the education of Oklahoma’s children. Bringing to light Epic’s unethical and illegal handling of taxpayer money has been a difficult road.”

Epic was quick to make an official release disputing the entire 120-page report.

“Yesterday, we witnessed pure politics on display,” said Shelly Hickman, Assistant Superintendent for EPIC. “The State Auditor, an elected politician, stood behind a podium and a gaggle of reporters and told a story. This isn’t the first time we’ve been subjected to political scrutiny, nor were the allegations new. The findings were presented with over-the-top sensationalism guaranteed to stir up defenders of the education status quo because we are growing, and they are struggling.”

Epic even targeted staff of the auditor’s office for being a cause for the report to include inaccuracies.

“Our student count is calculated the same way all schools’ student counts are calculated – and then approved by the State Department of Education. We explained this to the auditor’s main staff person, Salesha Wilken, many times throughout this process, but she seemed unable to grasp the concept,” said Hickman. “Salesha Wilken isn’t an auditor at all. She’s a former reporter. Her LinkedIn page lists skills like public relations and graphic design. She’s a storyteller by trade, and we saw that on full display in this audit report, which weaves quite a tale. That tale is fiction, and the State Auditor used it to further what is a clear, personal anti public-school choice agenda. That is apparent in her final thoughts section of the report.”

SAI says their staff contains a wealth of education, knowledge and auditing experiencing.

As one of the state’s top audit shops, SAI boasts more than 530 years of experience among its audit managers, directors, and administrators. Individual work experience in conducting all types of government audits ranges from 16 years to 39 years.

Focused on transparency and accuracy, SAI financial reports are independently audited annually and the agency undergoes a peer review audits every three years.

SAI has repeatedly received high marks in both audit reports.

More details can be found at www.sai.ok.gov.

Our audit is around 120 pages long –  so it would take hours to explain all the violations we discovered.  Here are just seven findings we found particularly notable.