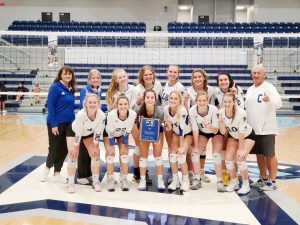 After claiming the conference crown, Choctaw’s Lady Yellowjackets went to work preparing for a regional tournament.

Choctaw opened the regional tournament Oct. 13 against No. 18 Southmoore (7-18).

Winners from the eight regional sites will meet in Choctaw next week.

The State Tournament for Class 6A will be played entirely at Choctaw High School beginning on Monday, Oct. 19. Bothe the OSSAA Class 6A and 5A State Championship games will be played at

State Tournament admission is $10 for adults and students.