As a softball powerhouse, Choctaw always expects to make a push deep into the postseason.

Unfortunately, this year’s season ended early as the Lady Yellowjackets finished one game shy of the state tournament. 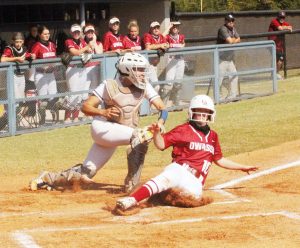 After dominating a first round matchup with Sapulpa, the Lady Jackets shutout Tulsa Union to setup a final showdown with Owasso. 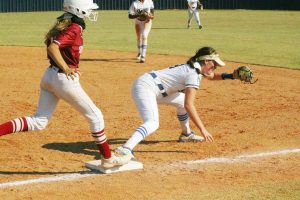 Emma Jackson tags out an Owasso runner at first base.
(PHOTO BY RYAN HORTON)

The Lady Jackets had momentum going into the championship game, but fell short in a 4-0 decision.

CHS had one more shot as Owasso would have defeat Choctaw twice to take the regional crown.

However, the Rams did just that as they clinched a 7-3 final score.

The Lady Jakcets were regional runner-up, and one win shy of the state tourney.

More photos can be found HERE