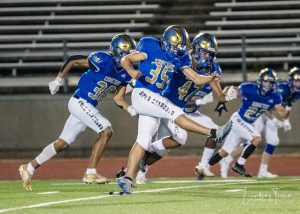 Tommy Yousey kicks off for the Yellowjackets vs. Putnam City West. (PHOTO BY LINDSAY TESIO)

Choctaw didn’t hesitate to slap 40 unanswered points on the Patriots during the first half.

The Yellowjackets claimed their fifth district win of the year, and managed to get some valuable varsity field time for some young athletes.

“Any district win is a big district win. We got to play some guys tonight that we’ve been wanting to play for a long time. These guys deserve it, and it was food to be able to care of business and do it.Those guys looked good. We gave some points up at the end, but it was nice to get some freshmen in and play some people,” said head coach Jake Corbin. “I still don’t believe PC West is as bad as their record indicates. They have some athletes, and they can run. If you make a mistake, they can make you pay. I just wanted us to go out and operate, and for the most part we did that. We’ve played a tough schedule, and it won’t be getting any easier moving forward.”

Choctaw is poised to host two home playoff games, and could likely earn a bye in the first round.

“We’re going to finish out with a really tough Bartlesville. They’re really stingy on defense and don’t give up many points. Hopefully we beat them and get to host two, which I think would be a first for Choctaw,” said Corbin. “But this team isn’t satisfied with hosting two we want to keep playing and get better each week. We were missing four starters tonight, and that’s been the story of the season. Hopefully we’ll get them all back for playoffs.” 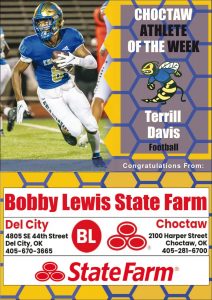 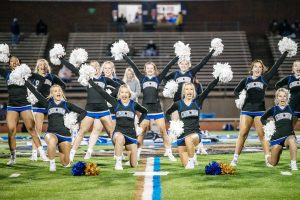