The Lady Yellowjackets opened with a 60-36 win over PCO.

To open the season, Carley Gasaway led the Lady Jackets with 17 points, Hannah Smith had 11, Trinity Gooden and Jazmine Adams each put up 10. Mya Purifoy and Raven Jackson each scored six. 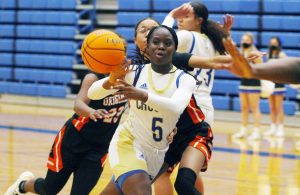 The Lady Jackets were happy to be back on the court after the ongoing COVID-19 pandemic ruined last year’s trip to the state tournament and caused a limited offseason.

“We’re happy to come out with a win. We had a lot of new people playing new positions. We’re going to have to learn on the fly with not a lot of scrimmages. It’s good to get a win in the books, and we’ll be able look at some things and make changes,” said head coach Ryan Maloney. “We tried to blend youth with experience. We played a good team that tried to pressure us, so it was good.”

The boys then took the court for another lopsided win in Choctaw’s favor.

With several of the roster still out for football, going for a state title Saturday, CHS still throttled PCO, 93-51. 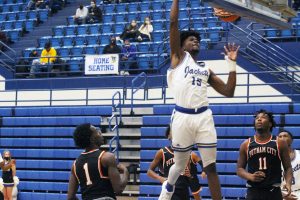 Ja’Mon Valentine scored 15 points. He had two rebounds and an assist.

LJ Gurley put up 14 with 10 assists and three rebounds.

“It was a good game. He’s a good coach, and will get them turned around shortly. We were lucky enough to play them first before he figures out what’s going on and turns them around. He’ll have them together toward the end of the year,” said head coach Jermain Simpson.

“We got to play some guys that might not get to play much the rest of the year. It was good for them to get varsity minutes and start to understand that atmosphere.”
Simpson says his lineup will look different in coming weeks and he has high hopes for his team that started the year ranked No. 11.

Those pieces include Jordan Mukes, Elijah Wilder and Jax Burchett that have been busy helping the football team make the state final for the first time in 60 years.

“Those are guys that are going to come back and play. We’re full of veterans and are a senior led team finally. All the guys understand what we’re trying to do, and we have an opportunity to finally do something,” said Simpson, who is now in his third season at the helm.