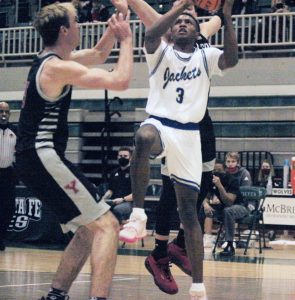 Choctaw’s LJ Gurley goes up for a basket on Yukon in round one of regional play. (PHOTO BY RYAN HORTON)

The Millers (5-8) never had a chance as Choctaw jumped out to a big lead to put an end to their season.

The Jackets commanded a 36-18 lead by halftime and weren’t slowing down.

Yukon finally had a quarter where they put up double digits, but it came late in the game with regular rotations through the Choctaw lineup.

Raul Nunez led with 18, Sean Franklin had 16 and Ja’Mon Valentine scored 10. LJ Gurley scored nine, and Jeremy Greer-Taylor had five. Four other Jackets had points on the board.

In the regional final CHS rematched hosting Santa Fe, but fell behind early.

Edmond jumped to a 15-9 lead after a quarter. However, the Jackets would rally keeping it a three-to-four-point contest in the next two quarters. That’d hold true until the end as Choctaw just couldn’t overtake the regional champs. 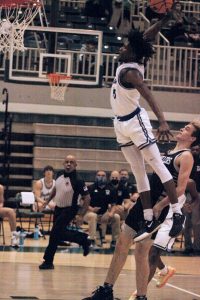 Sean Franklin goes up for a dunk on yukon at the regional tourney. (PHOTO BY RYAN HORTON)

The winner will advance to play the loser of Edmond North (17-4) and Putnam City North (11-3) for a chance to make the state tournament.