Choctaw’s lone female wrestler handled all challengers this season as she rolled on to a take top honors Thursday at Jim Norick Arena in Oklahoma City.

In Thursday’s final she took a 7-3 decision over Pawhuska senior Landon McCartney (12-2) to take gold.

Hand won by fall over Aralease Callahan, of Broken Arrow, to open the state tourney.

Then in the semifinal, she took a 1-0 decision over Daityn Webb of Davis. 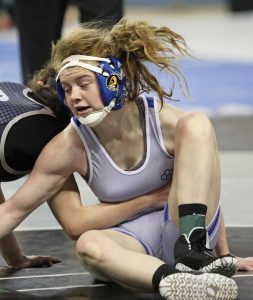 Choctaw’s Peyton Hand scrambles against Aralease Callahan, of Broken Arrow, to open the state tourney. Hand won the match by fall, and went on to claim the state title going 16-0 on the year. (PHOTO BY JEFF HARRISON)

The Lady Yellowjacket wrestler continued her historic high school career by topping the state’s best for a second straight year.

Last year Hand made history as she completed a dominant freshman season that ended by claiming Oklahoma’s first ever female state title with a first-place finish at the 2020 exhibition girls state tournament.

She moved up two weight classes for her sophomore year. So, Thursday she was the third female to ever be presented a fully sanctioned OSSAA State Championship gold wrestling medal. 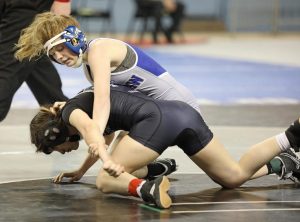 “I didn’t really think this was going to happen in women’s wrestling,” Hand said. “It took a whole century for this to happen. The boys are having their 100th boys state championship and this is our first one. I’m honored to be able to be one of the people that set this forward.” 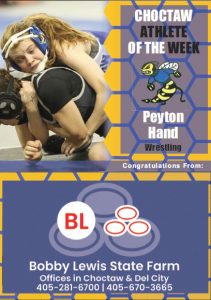 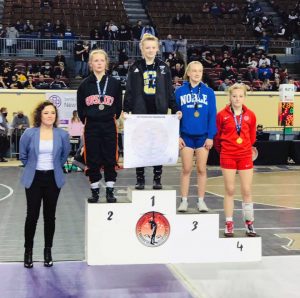