Ray runs for 287 yards on way to homecoming win 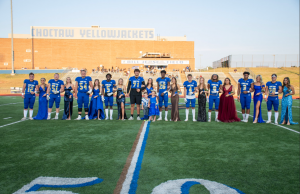 The undefeated and third-ranked Hornets traveled to Bill Jensen Field to take on the second-ranked Yellowjackets.

The 6A-II powers collided for a district-opening clash of championship contenders, and Choctaw’s Jackets came out on top, 29-20.

Aggression was high from the opening kickoff as both squads are fully loaded with talent and have hopes of winning the district and state title.

Tulsa Washington maintained their aggressive attack until the final seconds, but the Jackets managed to defend their home field for the 12th straight time.

Down by nine points in the final minute, the Hornets used their final timeouts and fought for an unrealized miracle as Choctaw took a victory formation.

The four quarters of play lasted a grueling three hours and 13 minutes, and flags were frequent.

By the end of the night the teams had combined for over half a hundred penalties. The final tally was 47 combined penalties, and an additional six instances when the flags resulted in offsetting infractions.

Choctaw scored just before the first quarter came to a close when junior quarterback Steel Wasel connected with Jax Smith for six. CJ Smith would slip in for two points.

The Jackets capped an 11-play drive that went 89 yards by taking an 8-0 lead. 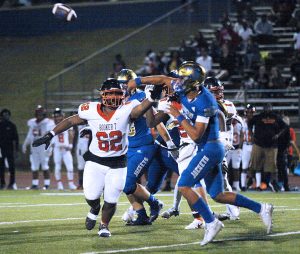 Choctaw QB Steele Wasel fires off a throw as the Booker T. Washington defense closes in. (PHOTO BY RYAN HORTON)

The Hornets would come out with their biggest offensive move of the night to open the third. After receiving the kickoff, Booker T. completed a two-play drive that went 80 yards for six points.

The Hornets had a short lead, but CJ Smith would add two TDs to put the Jackets back on top.

That’s when the Jackets stayed on the field for a huge fourth-and-5 conversion that sealed the evening in Choctaw’s favor. Jax Burchett made a clutch catch from Wasel to keep Choctaw’s offense on the field as the clock counted down. La’Trell Ray would cap the drive with a 2-yard dash for six that put CHS up 29-14.

In the final minutes of play the Hornets advanced to the Choctaw goal line primarily by penalties. Booker T. Washington added six points off a 1-yard play by Ethan Washington that made it a 29-20 contest.

Choctaw’s ruthless defense combined with a relentless run game pushed the Jackets across the finish line. 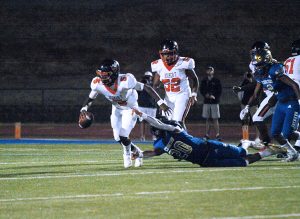 “Booker T. is a good team that fights until the end. It’s no surprise to us that they’re a fourth quarter team. They’re very well coached, a real disciplined team and have talented athletes all over the field. We knew it could turn into a nail biter,” said head coach Jake Corbin.

“We know they’re really difficult to throw the ball on so we developed the run game. We were opportunistic when we threw, but we ran the ball really efficiently.”

Wasel connected with nine passes good for 124 yards and one TD to Jax Smith.

Jackson had 54 yards receiving, while Ray and Smith each had 24.

Burchett had 13 yards receiving, and Lamere’on Curry had nine.

“The offensive line, RJ, La’Trell, CJ and Juju Smith all did their part exceptionally well. Then you have Jax Burchett with the big fourth down making an unbelievable catch, and he has a history of doing that,” said Corbin.

“La’Trell is an awesome kid. You can put him at receiver, running back or anywhere. He knows the entire offense and is a smart kid and just so electric. He had a big night, and just took a beating and kept pounding. I’m super proud of him.”

Corbin says the goal remains to keep getting better every week, and he’s proud of the progress being made.

“We challenged the offensive line on Monday. We’re practicing with a purpose every day, and they’re getting better at exactly what they need to get better at. They put together four great days of practice and executed come Friday, and I couldn’t be more proud of them,” said Corbin.

“We’ve got some young guys coming up and making a difference, and they’re really effort guys and just a lot of fun to be around and coach. On defense we have guys flying around. They have D1 receivers and our DBs did a great job.”

Choctaw has now bested Tulsa Washington in back-to-back seasons, and the overall home field win streak is sitting at 12 straight.

Next Friday No. 2 Choctaw hosts top-ranked Bixby in a rematch of last year’s state title game on Bill Jensen Field. 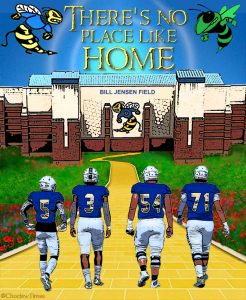 HOMECOMING 2021: Choctaw’s Yellowjackets defended the nest from the “Wicked Wasps of the East” Friday when the Booker T. Washington Hornets visited Bill Jensen Field. The district opener was Homecoming for Choctaw High School, themed “There’s no place like homecoming.” (ILLUSTRATION BY RYAN HORTON)

The Choctaw community came together last week to show there’s no place like home.

The homecoming parade ran from Choctaw Creek Park to CHS, and was completely student planned and coordinated.

Organizers say the parade featured about 50 vehicles and around 900 participants.

“A group a high school students in our student leadership class have been working on the parade for about six weeks. This parade is very possibly one of the biggest community events in Choctaw which makes this an even greater accomplishment,” said CHS Student Council President Ben Ball.

“These student leaders coordinated with the city regarding facilities and permits, discussed safety and logistics concerns with the police department, setup and coordinated online registration, and maintained communication with participants.”

This historic win inside Bill Jensen Field was just the second time Choctaw has defeated the Hornets, and the victory improved the Yellowjackets’ home win streak to 12 straight.

In front of a large home crown, Choctaw moved to 1-0 in district play.

However, before that Choctaw’s Homecoming Royalty was crowned. 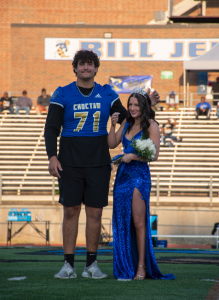 For photos, score updates and more follow us online @ChoctawTimes