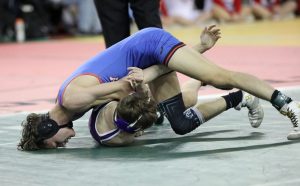 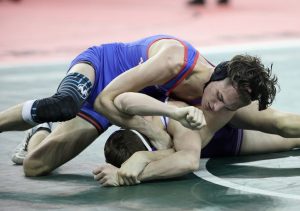 Liam Russell works for a pin in the 106-pound final, but his opponent would escape to take the gold. Russell brought a silver back to Harrah High School. (PHOTO BY JEFF HARRISON)

Russell opened with a fall over Skiatook’s Cole Smith and added a 7-5 semifinal decision over Heritage Hall’s Peyton Park to earn a shot at gold.

In a hard-fought match, Chickasha’s undefeated Dylan Bratt would take a 7-5 decision over Russell for the title.

Manek was then eliminated with back-to-back losses to Blanchard and Chickasha wrestlers.

Silas Snead, of Newcastle, won by fall over Ian Fortelney at 132 pounds.

Wilson Manek got caught by a Fort Gibson wrestler before taking a 6-3 decision over Blanchard’s Blake Witmer.

Manek was eliminated when he was pinned by Issac Long out of Skiatook.

Harrah’s first girl state qualifier, Madison Welch, opened with a fall over Stilwell’s Adrianna Chronister, but was eliminated by losses to Mustang and Henryetta wrestlers at 145 pounds.

Senior Gabe Johnson was named an alternate at 170 pounds.

Harrah was proud to have a solid group of qualifiers this season.

“We build ours from the ground up,” said head Panther wrestling coach Bryan Miller.