After Choctaw earned the right to host a Class 6A regional, last week’s heavy rains put a damper on the Yellowjackets’ hopes for the postseason.

After days of heavy rains and severe storm warnings, the regional tournament was relocated from Choctaw High School to Putnam City for the opening rounds.

After Choctaw blew out Putnam West, 22-1, Edmond Memorial capitalized on Choctaw losing their home field advantage taking an 8-5 win at Putnam City May 6.

Choctaw bounced back securing a 12-2 win over Moore Friday setting up a rematch with the Bulldogs Saturday afternoon.

The Yellowjackets would need two wins over Edmond Memorial to clinch the regional crown, and they looked on track taking a 9-4 win to open the day.

Tied 1-1 after the opening inning, Choctaw added two in the third and four unanswered in the fourth to command a 7-1 lead moving into the fifth inning.

Memorial would rally to win the fifth inning with three runs to Choctaw’s two, but the Jackets cruised to the victory setting up a third and final contest with a trip to state on the line.

RJ Jackson had a grand slam, while Phoenix Meza and Jarrett Flaggert also hit homeruns in the game. 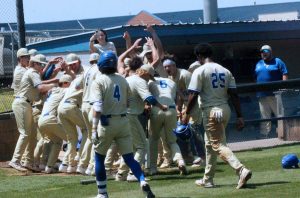 The Yellowjackets swarm senior Jarrett Flaggert (6) as he heads to the dugout after hitting his 18th homerun of the season to tie the school’s single season record in a regional win against Edmond Memorial Saturday. (PHOTO BY RYAN HORTON)

In the third regional matchup of the power programs, each squad would record six hits but Edmond Memorial would edge CHS for the title, 5-4.

In the final, Meza had a homerun. Drake Fittro, Jackson, Flaggert and Meza all had RBIs.

The Jackets finished the year 30-8 overall. 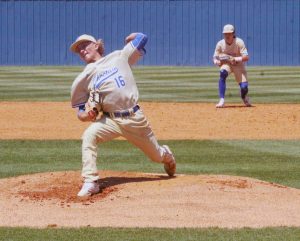 CHS had the highest team GPA in Class 6A with a 3.86 team GPA for 22 rostered players.

With the 2022 title, the Yellowjackets continue a long history of being outstanding on the field and in the classroom.

Choctaw coaches put emphasis on the need to perform on and off the field, and CHS baseball has set the gold standard for academic achievement.

Choctaw has been in the running each year since the OSSAA started awarded the top student athletes with academic team titles. They’ve claimed six of the last seven academic state titles.

The Jackets claimed the Class 6A Baseball Academic State Championship in 2015, 2016, 2017 and 2018. In 2019 the Jackets earned the Distinguished Academic Achievement Award (Top 3), and there were no state awards in 2020 due to the COVID-19 pandemic shutdown. CHS returned in 2021 to take the academic title, and now they’ve earned the 2022 top honors.

Choctaw also continued a strong tradition of perfuming on the field this year.

Regularly attracting attention from scouts, the Jackets marched to 30 wins on the year and the right to host a regional tournament placing second in District 6A-2.

The Jackets finished the year with a heartbreaking loss in the regional final with Edmond Memorial. The Jackets’ overall record was 30-8.