Harrah and McLoud wrestlers in grades seventh through 12th were invited out to a wrestling camp at Harrah High School, June 7-8.

Lanham is a two-time All-American and current Division I head coach.

In addition to working with some of the most prestigious college wrestling programs in the country, he spent seven years as a Midwest City Bomber.

Lanham took the helm of Duke wrestling in 2012. 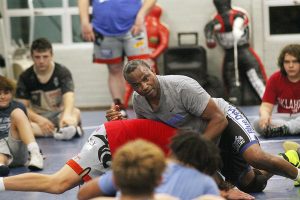 He has made major strides in each season mentoring Blue Devils on and off the mat.

As a college competitor, he garnered All-American honors at both OSU and the University of Tennessee. He graduated in 1988. Lanham then served as a graduate assistant at Oklahoma State from 1988-91, helping the Cowboys to a pair of NCAA Championships.

He was at Midwest City High School for seven years starting in 1997.

While at Midwest City, he mentored several state champions and sent them on to successful college careers and also volunteered his time at Oklahoma University, coaching several All-Americans.

“He was my high school coach at Midwest City. He was one of the coaching staff when Midwest City won all those championships. We were ranked No. 5 in the nation when I was there,” said Miller, who was a state qualifier before graduating in 1999. “Everyone In my bracket at state that year went Division I, except for me. I went Division II. Class 5A was the biggest back then, and it was tough. I beat all the 2A, 3A, and 4A champs at my weight and even beat the national champion in my bracket at state.”

Miller says he and many other former Bombers owe much of their success to technique and character learned from Lanham.

Now, thanks to local attorney Randy Goodman, Panther and Redskin wrestlers will benefit from the wealth of knowledge Lanham has to offer.

“He’s a great guy. Hopefully some of his personality will rub off on these kids. This is what I try to surround these kids with,” said Miller. “We’ve never had him down to lead our camp before, and we’re thankful to get him down here.”