“We’re finally coming together as a program, and are officially a team and a family. We’ve been working so hard and to have a season opener like this is all I could ask for. They’re a great team, and we battled, said Weber. “There was a lot of grit and blood in that game. With the way we started today, we can only go up from here. I’m excited to go out and play more teams and show them that we can battle when we play as a team.” 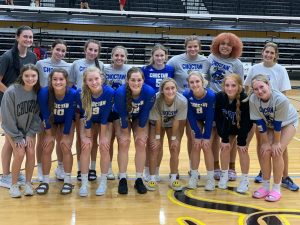 Choctaw’s squad is senior heavy this year with six 12th graders. A deep roster of talented underclassmen helps set the CHS lineup for what could be a big season for the Lady Jackets.

“Carley Gregory is doing a great job. She’s only a sophomore, but is coming out blazing. She works hard and is huge for us. Macy Tyra is our senior setter and is running the court right now. I couldn’t want anything more from a senior who is also my captain. We have six in the senior class, and I could go on and on about all of them. Maddy Gomez is also a senior, Jayla Flient, a senior transfer, is awesome. They’re definitely going out with a bang this year.”

A native of Prosper, Texas, Weber is a highly awarded volleyball athlete claiming a variety of individual and team awards through high school and then Oklahoma Baptist University.

“As soon as I came here and interviewed, I felt right at home. I’ve been welcomed with open arms by the school, community and the girls. It’s been great and there’s no other place I’d want to be,” said Weber. “I’m teaching ninth great Oklahoma history and government so I’ll be in the freshman center this year. I’m excited to be on campus and in the community all the time.”

She’s joined by Waxenfelter, a 5-foot-11 left-handed blocker and hitter, that played for CHS before graduating in the CHS Class of 2020.

“I’m coaching the freshman and varsity teams. ‘Wax’ is coaching the junior varsity, and we’re each other’s assistant,” said Weber.

The young coaching staff is focused on rebuilding the program, and is confident success will follow the hard work the Lady Jackets have been putting into improving their team.

“I want to play it game by game, and just play every game the hardest we can until we finish,” said Weber. 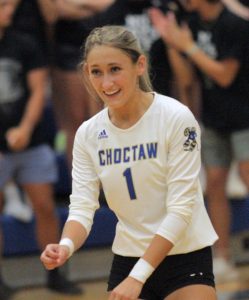 The Lady Yellowjackets rebounded from a season-opening loss to go 5-1 over the weekend at the Sandite Invitational.

After a minor setback to the Lady Sandites, Choctaw bounced back winning three straight in two sets.

Senior libero Jaxan Taylor was named to the All-Tournament Team.

With the 5-1 run Choctaw secured second place in the tourney, and capped week one with a 5-2 record.

Choctaw’s next match is a visit to eastern Oklahoma County rival Carl Albert this Thursday.

The Lady Titans opened the year with a 4-4 run.