Choctaw threw up 28 unanswered points to open the night as the Yellowjacket offense looked unstoppable, and the first two Panther drives were pushed back into their own end zone by an aggressive swarm of CHS defenders.

Putnam North would eventually find the end zone twice, but Choctaw took their foot off the gas early in the second half and by the end of the night they were getting some freshmen in for varsity reps as they cruised to the district win. 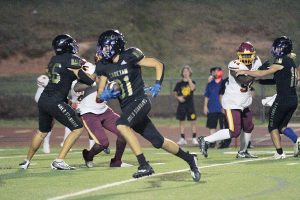 The victory was the most lopsided win in the 26-game series that dates back to 1978.

Choctaw has now won back-to-back meetings with the Panthers. Before Friday Choctaw’s biggest win over Putnam City North was a 42-14 win in 2017 that broke an eight-game skid against the Panthers.

The Yellowjackets were up 41-14 on PC North by halftime Friday.

“PC North is always a tough foe and I have a great deal of respect for them and their program. You can be proud anytime you get a chance to take a district win against PC North. We’re happy about it. We got a lot of guys in and felt like we played well. Obviously, some things to clean up, but for the most part, really proud of the way our guys played offensively and defensively,” said head coach Jake Corbin. “I feel like we’ve improved each and every week, and I’m hopeful we can continue on that trajectory.”

The Jackets put up 251 yards passing and another 172 rushing. 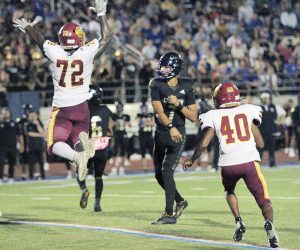 Senior QB Steele Wasel had 203 yards on nine passes good for four touchdowns and a pair of two-point conversions. He also had five yards rushing.

Cash Williams connected on five of seven throws good for 53 yards and two TDs. Williams had 41 yards rushing including a TD run.

Freshman QB Landon Gatson connected on one pass attempt, but had another picked off going for a TD late in the game.

On four passes La’Trell Ray had 112 yards receiving and a TD. He added 111 yards on the run.

Nathan Keiffer and Jax Smith each had 41 yards receiving. Keiffer caught a TD pass and a two-pointer.

Juju Smith had 31 yards receiving including a TD.

RJ Jackson finished with a 14-yard catch for six points.

Connor Stover ended the night with a seven-yard TD catch.

Wasel and Williams each added a reception good for two-point conversions.

Choctaw had plenty of spectacular plays on all sides of the ball.

Juju Smith had a kickoff return and a punt return that could have scored as he ran nearly the length of the field, but they got waved off due to holding calls.

Choctaw scored on three safeties, and also scored on a kickoff that Tommy Yousey placed just before the Panther goal line.

“Tommy does a great job every game and really placed the ball in a beautiful place, and allowed us to have a chance to get in,” said Corbin. “They’re really a fun bunch to coach. They try really hard and give you great effort, so they’re a lot of fun to go to battle with each Friday night and I enjoy watching them be able to celebrate.”

Choctaw’s defense was relentless all night. 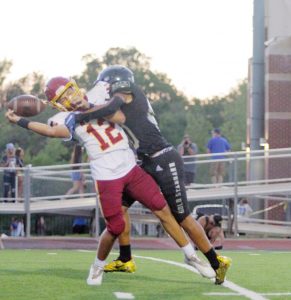 Choctaw’s Matthew Loudenslager levels PC North’s QB knocking the ball loose and setting up what would be the first of three safeties on the night. (PHOTO BY RYAN HORTON)

Jacoby McClain was credited seven tackles, two sacks and he forced a fumble.

Easton costa had five tackles and recovered a fumbled ball.

J’Mari White broke up a pass and had a solo tackle.

Marques McGrew had two tackles and a sack, while Dasean Hein, Will Smith, Dajon Green and Garrett Whyatt each had a solo tackle.

Putnam North remains winless on the year, and fell to the bottom of 6A-II-2.

Oct. 7 Choctaw will host Deer Creek (4-0, 1-0) in what could decide the district champion.

Last year Deer Creek eliminated the Jackets from the playoffs, and they haven’t forgotten.

So far this year the undefeated Antlers have taken wins over Edmond North, Edmond Memorial, Mustang and Ponca City.

So far the Wolverines boast wins over Duncan, MacArthur, Eisenhower and Putnam City. 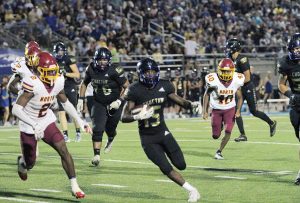 La’Trell Ray puts up big yards against the Panthers. (PHOTO BY RYAN HORTON)

The high school was a buzz with activities throughout the week, and the Choctaw community showed up in force for a Thursday parade from Choctaw Creek Park to CHS. The community came back out Friday night as the stands were packed for the crowning of some new Choctaw royalty before the Yellowjackets took their biggest win ever over 6A-II rival Putnam City North.

The crown, sash and flowers were presented by Molly Coulson and Keyon Corbin.

After the ceremony, Choctaw kicked off against the Panthers in the 6A-II-2 district opener.

The Jackets were dominant and cruised to a 64-14 win and a 1-0 district record.