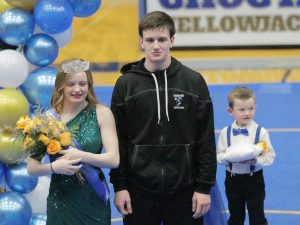 Choctaw’s royalty went on to claim falls later that night as the Yellowjackets rolled over the visiting Shawnee Wolves at homecoming giving up just three matches on the night.

CHS was dominant in the celebration securing the 58-12 victory.

The flower girl was Bexley Leisenger, and the crown bearer was Nash Leisenger.
Choctaw’s 2023 queen is a three-time state champion, and looking to become a four-time state champ next month. She’s rolled through competition her entire high school career, and has kept it going her senior season earning tournament championships in Reno, Inola, Cache and Carl Albert. She’s also claimed a plethora of outstanding wrestler honors to accompany her collection of gold.

She is the daughter of Tyler and Kristie Hand.

O’Hagan, Choctaw’s 2023 king, is a senior wrestler for the Jackets.

This year he has earned third at the Perry Tournament of Champions and sixth at the Geary Tournament. He is the son of Sean and Aimee O’Hagan. 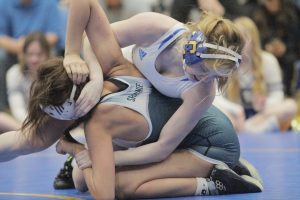 Yellowjackets give up just three matches in homecoming dual with Shawnee

The Yellowjackets claimed six falls, a technical fall, two major decisions, a decision and a forfeit.

The Wolves got away with two decisions and a fall in the final match as Choctaw cruised to the 58-12 win.

Hand caught the challenger early in the second period securing the fall.

“Peyton got to wrestle and her brother got a fall so the Hand family should be proud of their kids,” said head coach Benny Coleman.

The opening pin set the tone for the evening as Choctaw would grab five more falls and dominate a few more matches on the night.

“This was a good match for the team. We needed a good win,” said Coleman.

Ethan Thomas then took a 10-3 decision over Benji Cole at 113 pounds.

Mason Hanna added a fall over Kaiden Kirk and then Drew Auwen secured a pin over Ethan Soliz at 126 pounds.

At 132 pounds Shawnee’s Christien Taylor secured an 8-5 win over Jory Garrett to put the Wolves on the board. At 215 Gavin Hill lost a decision to Beau Skelton and in the heavyweight bout Shawnee secured their third win as Logan Cash pinned Kaden Stitt.

At 157 Zac O’Hagan won by fall over Chaysin McClain.

Asher Walls got a fall over Trevor Thomason at 190 pounds to cap the Jacket offensive.

No. 8 Choctaw improved to 3-0 in dual action. Later in the week Choctaw’s varsity traveled to Mustang while the junior varsity wrestlers went to the Carl Albert Tournament.

The final home dual is senior night vs. Edmond Memorial and the action begins at 7 p.m. Jan. 28. 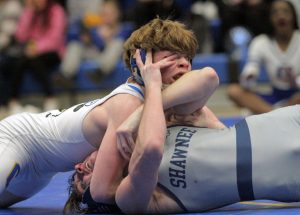 Shawnee’s Christien Taylor desperately tries to avoid a fall to Choctaw’s Jory Garrett. Taylor got the escape and eventually took an 8-5 decision. (PHOTO BY RYAN HORTON) 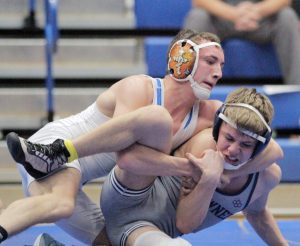